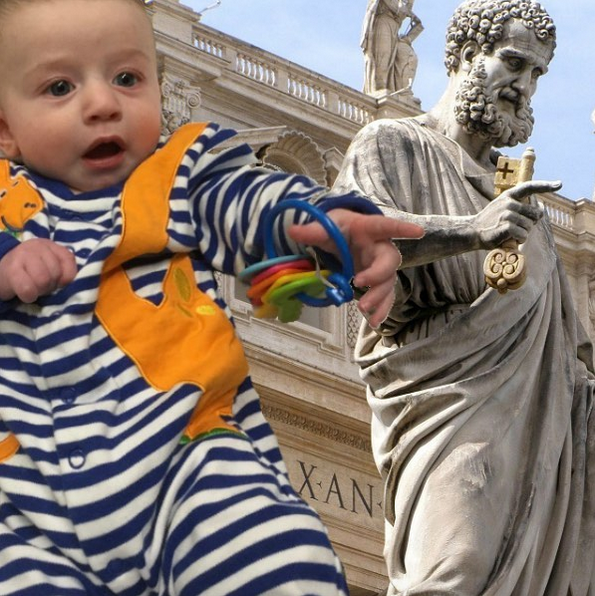 WORK OF ART: HOW SOCIAL MEDIA BRINGS CULTURE TO THE TODDLER SET

We all know that social media is supposed to create a connection. A deeper connection. But often, it can appear to be a tad too Hey, Ma. Look at me. So, what happens when children are the subject of social media? If it’s @arthistorybaby on Instagram, then magic happens.

The brainchild of new dad Menachem Wecker, an arts, culture and political journalist based in Washington, D.C., the subject is one close to his heart: his son, Aaron Wecker. It all started in February of 2019. “My wife and I took a picture of our son and I was struck by the way his right arm was dangling just so over the side of the bed, and something about that form and the palette of the image (extreme dark and light) reminded me of neoclassical painter Jacques-Louis David’s famous 1793 work, The Death of Marat. I posted the two side-by-side and the handle was underway.”

Understanding the complexities of social media, Wecker admits, “I quickly set some ground rules for myself. I would crop and occasionally rotate or flip images of my son, but otherwise, there would be no posing (as if he’d ever move his arm or leg if I asked, or hold a position long enough for me to stage). And on a few occasions, I would self-censor images if my wife didn’t like them. The baby couldn’t talk, so he was stuck with my decisions, and friends told me they hoped I could generate enough money with the project to pay for the inevitable therapy he would need as a result when he got older (sadly, I haven’t yet managed to do that),” he quips.

With so many posts, I ask Wecker if any stand out, since there is a healthy mix of Modern, Neoclassical, Impressionistic, and just about every other form of art represented. “Looking back over the handle, I’m amazed to see how much he’s grown and changed in such a short time,” he notes. “But over the course of more than 14 months and more than 200 posts, some of my favorites are…

With an art critic for a dad, Aaron has clocked more time in galleries and museums already than many adults, but he mostly sleeps or whines through them at this point, according to Wecker. “But I really do think his travels–quite a few states and some overseas travel as well–and the art and architecture we see together makes a difference. And, who knows if it won’t mean that when he sees things again as an older person that it won’t jog what he’s already seen on some level? And for me, having trained as an art historian, I’m able to imagine him through the history of art as a warrior brandishing a sword (perhaps having just slayed the terrifying Medusa), as Moses having come down from on high with the Tablets of the Law, or as a scholar-monk poring over medieval manuscripts. I hope someday he will see his dad as nearly as heroic as the potential I see in him now.”

The success of the social media experiment is now evident for the new parents. “The handle has already attracted a following that humbles me — an ambassador, curators and museum directors, and others,” muses Wecker. “I can see a bit of how tough it is to be a new, first-time mom when I see how much my son is drawn to my wife, but in a different kind of way, it’s also tough to be a new dad. This project is simultaneously therapeutic to me, and it’s also a way to keep my brain active at 3 a.m. when I’m trying to get my son to sleep. There’s so much uncertainty and scariness in being a new parent, and this helps ground me while also tickling my imagination.”

We are considering young Aaron Wecker to already be a hit on social media. “I assume the latter is just as important for new dads as it is for a (now) toddler, who is figuring this big world out and what he makes of these two strange people who are his housemates”, says Menachem Wecker. “It’s also the very stuff of which art and culture are made, and I think some of my followers have found this project to open their understanding of the works of art as well–whether they are familiar–or new–artworks.”