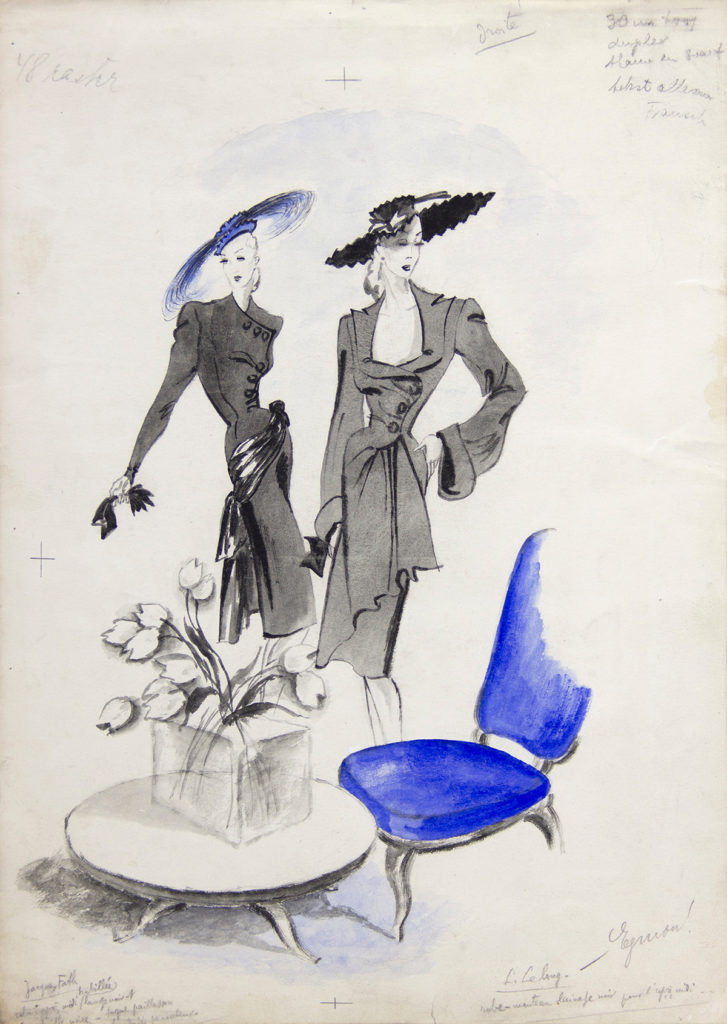 Texas’ link to fashion’s most revolutionary transition recalls the remarkably intriguing life of the almost-forgotten French designer Lucien Lelong, who made it possible, according to our vintage fashion chronicler, Gordon Kendall

The major design houses of Lelong’s era shared close physical proximity to each other. From a reasonably small, contained area of Paris, the fashion powers Lelong, Chanel, Patou, Schiaparelli, Lanvin, and so many others, wielded was worldwide. Think of so many color-topped dressmaker’s pins, all going away from a center. The world of French couture was much like a pincushion itself in terms of these far-pointing influences. Each design house, or pin, represented the power it had to attract and collect from private, wealthy clients, and department and specialty stores with ample open-to-buy budgets, and lucrative licensing deals. Such far-reaching influence extended, not surprisingly, to neighboring Germany. However, that influence was not received as positively there as in other parts of the world.

When German forces invaded Paris in June of 1940, it did not take long for them to make their way to the very center of fashion’s pincushion: the offices and files of the Chambre, which they confiscated in due course. Motives for this plan of action have been ascribed to various reasons. Ideologically, the Nazi regime professed the desire to subjugate other nations’ cultures; to suppress them in favor of their own. To that end, French fashion, especially that emanating from the leading couture houses, was considered frivolous, an anathema to the sensible ways of women’s dress proposed by the Third Reich. Historians note their goal, ultimately, was to move the center of fashion from Paris to Berlin and Vienna, already home to more acceptable fashion makers. Raiding the Chambre was the first step in that plan.

The invaders are thought to have wanted to take advantage of the power of the pins.. That is, to tap into and exploit the trove of financial and political information gathered by the fashion houses over the course of years of doing business. This one event began Lelong’s pincushion war. It was to be his and his fight alone to keep French couture, French, and profitable, as well. Here’s where history grows increasingly silent. No one is sure, exactly, how the dapper Frenchman managed to do this.

What is known are Lelong’s accomplishments. He persuaded the invaders to forgo their plans to move the entire French fashion industry, couture included, to Germany, or Austria. This he achieved after traveling under heavy guard to Berlin to speak directly with various Reich ministers and committees. For this feat, however, few records appear to have either been made or continue to exist. He saved an estimated 12,000 lives by preventing their deportation. Again, there are few written explanations as to how he accomplished this incredible task.

Further, he obtained, despite rationing and requisitions, enough fabric for the couture houses to remain in operation during the entire length of time the Germans occupied Paris. He obtained passes for foreign buyers to attend fashion shows in non-occupied France. These, too, appear to have been the result of his persuasive appeal to the Germans. Yet few documents detail exactly how he managed to accomplish feats that rivaled the best efforts of any of the Allied nation’s diplomats.

Perhaps it is the fate of a successful diplomat to leave behind accomplishments with few traces of themselves, with only their persona remaining. That certainly appears to be the case with Lelong. While his own fashion house has not existed since 1948, and his name now only appears on a scant few perfumes made under license by a New Jersey-based chemical company, the names of designers he mentored, like Dior, now stand prominent in international fashion. Lelong will always be credited with saving French couture and protecting the lives of thousands. He was, for this reason, the ultimate, but understated, patron of his industry. Could any one person in fashion today yield such professional, financial, political, and, yes, cultural power? Bernard Arnauld, current chairman of luxury behemoth LVMH, might be Lelong’s closest contemporary. Perhaps.

Unfortunately, Lelong was powerless when it came to his own health. Long afflicted from wounds dating back to World War I, illnesses, and a list of infirmaries forced him to retire from the rigors of running a business at the time of Dior’s ascent. Accordingly, he missed the Dallas ceremony hosted by Neiman Marcus and Stanley Marcus. But fashion had moved on, as the Neiman Marcus award recognized and underscored. When Lelong died later in 1958, his name had already faded into fashion history. The New Look of fashion heralded by Dior was not just in style, but in newer ways of doing business. Methods became much more under corporate control than paternal protectionism.

In today’s quest for authenticity and brand-controlled storytelling, it seems ironic that any remaining story of Lelong may never be fully known, much less recounted. This year will mark another year since Lelong’s passing. What will start, too, is another year of unanswered questions as to how one of fashion’s most remarkable players accomplished what he did, only to end up what may be the most dreaded of all of fashion’s fates: forgotten.