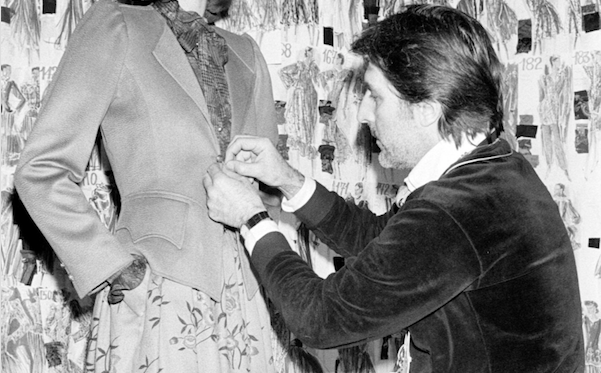 The legend and legacy of the top 80s designer Emanuel Ungaro, a Texas fashion favorite for his French flair and eye for color, continues today, according to our global fashion expert Gordon Kendall.

COLOR ME BEAUTIFUL
Those 1980s styles were when ruffles flourished…ruching ruled…and neon-brights were just right when it came to the tonal palette. The fashion world recently said goodbye to Emanuel Ungaro, the French designer who came to prominence during the era that came to be known for female power dressing. In a sense, that very same empowerment and homage to the 80s is back in this season’s ballroom and red carpet dressing.

He loved women as much as he loved to dress them―in shapely, body-conscious clothes, rich in details, embellishments, attention-grabbing colors, and arrestingly contrasting prints. Images can only capture the impact of his clothes at the time which inspired each collection. Their exuberant aspect, from the seemingly simple, but saturated chrome yellow sheath, to the over the top and then some black ball gown were works of pop art on fabrication.

Emanuel Ungaro, the designer, however, was much more complicated than even the most lavish of his gowns. Houston philanthropist and International Best Dressed Hall of Famer, Lynn Wyatt, an early Ungaro fan and frequent attendee at his Paris couture shows, clues us into what he was like when she says, “He was truly ahead of the game. He loved using color. And he was such a nice man, too.”

To become ahead of the game, Ungaro first learned the French fashion game of over 50-years ago, a time before designers’ houses had become the big commercial brands many are today. He came from the quaint and arcane world of traditional haute couture with its many rules and countless demands placed on designers and clients. It would be difficult to find any designer with credentials more traditionally impeccable as his. In fact, it was in his blood. He was born the son of a tailor in Aix-en-Province in 1933 from whom he learned the trade of cutting, sewing, and, fitting garments. To that end, he was master of both those extremes of garment construction: le tailleur, or structured work and le flou, to make flowing. He didn’t just sketch; he often preferred to drape onto live models.

SURROUNDED BY GREATNESS
Ungaro went to Paris, where by 1958, he was working with the one and only Cristobal Balenciaga, where he stayed for six years working directly with the master couturier. He briefly worked in 1964 for just two collections with his mentor, Andre Courreges. However, he was always destined to be out of the shadows of others. Ungaro was now ready to define fashion on his own terms, to be ahead of his peers and how they perceived fashion, but most importantly how they expected, even demanded, their fashions be worn. His genius was to design clothes that would appeal to a new generation of women who, themselves, defined fashion in their own way, not just on the terms set by a cabal of designers with their constantly changing seasonal dictates of what it meant to be fashionable. By the 1980s, his heyday, he had hit his professional stride, both in his fashions and what they meant to those who wore them. His fame was global.

The Ungaro lady knew she was a respected lady. He only sought to dress, never to tell her how to dress like many of his contemporaries. These worldly, sophisticated women who became his loyal customers, it was they who chose to be as outrageous as outré as they wished, whether it be in the boardroom, the ballroom, or anywhere else for that matter. Ungaro only offered how it might be done through his own take on color, print, silhouette, and style ideas found in both his couture pieces or, later, sent out under his Parallel ready-to-wear label.

His clothes were as bold as his respect for those who wore them, an attitude that came exuded and was understood by his legion of fans. Images of Ungaro’s clothes may speak to a particular period in fashion, but along came Ungaro with the timeless message of a fashion designer’s respect for the women who wear his designs.