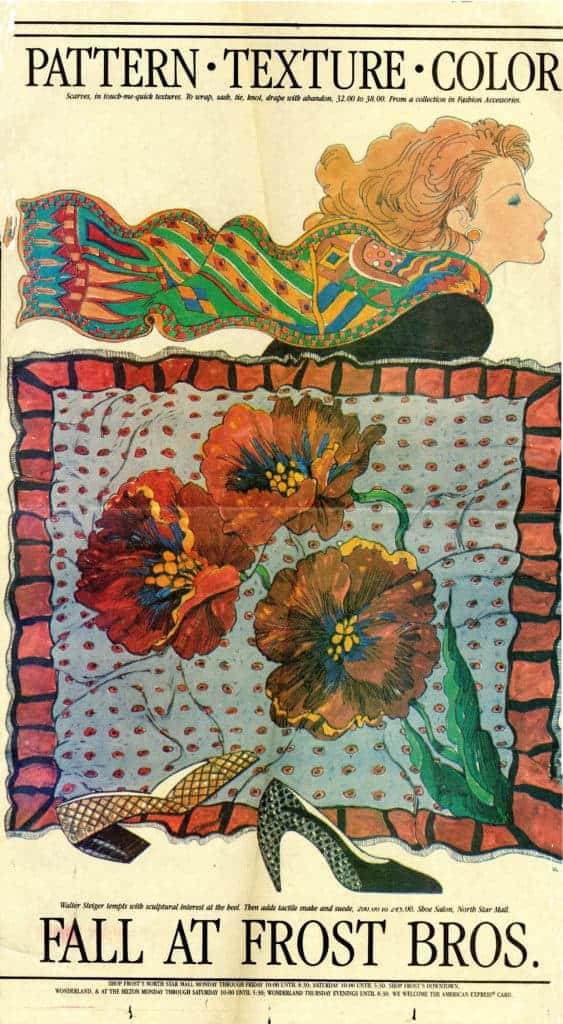 Frost Bros., in San Antonio and Austin, was at the pinnacle of department stores in Texas well into the 80s, when the fashion illustration of Max Jordan ruled supreme, as our pop culture savant Lance Avery Morgan shares.

Before the world of social media offered us ads every three posts, for very little that we may need or want, there was the golden fashion advertising era of the daily newspaper. Measuring a wide one-and-a half-feet by two feet, folded, it took up most of any space it occupied during the business of reading it, unfolded.

Enter the gorgeous ads for items that were both fetching and interesting. With the likes of Neiman Marcus, Sakowitz, Scarbrough’s, and so many other leading department stores in the state, retail advertising offered lush illustrations of the delectable things that could easily appear on anyone’s must-have list. For instance, in San Antonio and Austin, the Frost Bros. department stores led the way for Manhattan-quality illustrative art for decades. So when the University of Texas-San Antonio Special Collections department obtained a donation of the Max Jordan Papers, a cornucopia feast of conceptual drawings, mock-ups, page proofs, and newspaper advertisements, it was like striking artful gold.

Jordan himself produced the majority of the items during the 1980s for Frost Bros. Many of his illustrations were created for men’s and women’s fashion, fragrance, skincare, and cosmetics advertisements that donned the city’s leading papers of the day, the San Antonio Express-News and the San Antonio Light. So prolific was Jordan’s work that the collection also possesses sketches from his time at the I. Magnin department store in San Francisco. The vibe of most of the illustrations was that of rich, saturated color and aspirational scenes to entice the reader into the department store’s point of view.

The arduous process to create an advertisement that would reach hundreds of thousands of readers was layered. Initial mock-ups were part of the production process of creating advertisements. Once perfected, the mock-ups were then used for page proofs and the final product, newspaper advertisements. Max Jordon and the store’s Creative Director Marlon Chapman had a work history together in San Francisco. They comprised the team of half a dozen artisans who would illustrate everything from fragrances to fashion to housewares of the era, ranging from artful black and white to bursts of color that illuminated the page.

Even if we view things mostly from our electronic devices these days, we know much of it stemmed from the colorful past of creative advertising that can still be admired and appreciated.