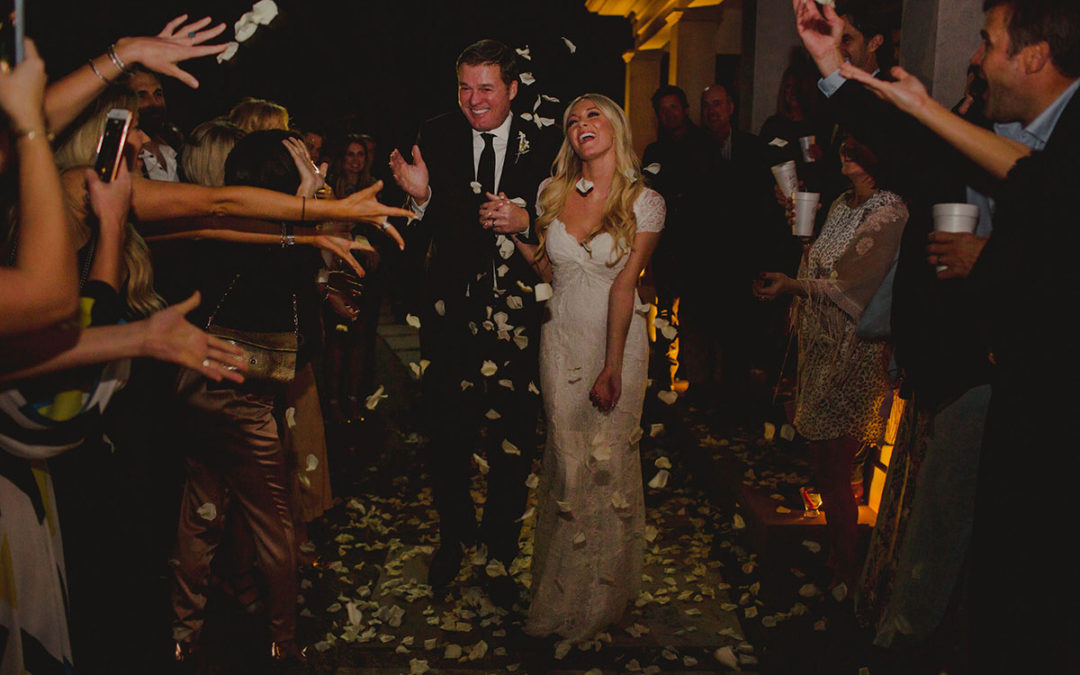 By Rob Giardinelli
Photography by Sarah Doliver and Ben Porter

Amber Scanio and Al Koehler were recently married in a surprise ceremony at the Tarrytown, West Austin home of Chico and Wendy Korth. Amber, a native of Keller, Texas and a University of Texas at Austin alumna and Al, a native of Houston and a Texas A&M alumnus, first met at a birthday party the groom hosted at his home in 2016.

After a two year courtship, in the summer of 2018 while vacationing in London, the couple became engaged at their favorite spot in the city, a private club in the Mayfair section of England’s capital. “As we were about to walk out to meet some friends for dinner, Al told me to wait a second because he had to ask me something,” muses the bride, Amber Scanio Koehler. “My heart skipped a beat. I knew what was about to happen.” She went on to say, “Right there in our cozy room, Al got down on one knee, grabbed my hands and told me he’s known that he wanted to spend forever with me from the very beginning. When he asked me if I would marry him, tears were already streaming down my face. I shouted yes.”

Seven months after their engagement, the couple invited 250 of their family and closest friends to an engagement party at the Korth residence. As partygoers arrived on a picture perfect, crisp late winter evening, some eagle-eyed revelers noticed a stunning Sperry Tent in the back yard that was visible from the street. It left some to wonder if something bigger might be in store beyond what was already supposed to be a very special night.

At the beginning of the evening, the happy couple effortlessly and graciously played the role of party hosts but then  they sneaked away for a “costume change”. While preparing to get ready for their nuptials, a funny thing happened: the zipper of Amber’s engagement party dress became stuck. “I only had a couple of minutes to change into my wedding gown. Instead of panicking, my best friends’ were quick to pull out the scissors to cut the party dress off. We couldn’t risk messing up my hair and makeup,” Amber recalled.

Shortly before the bride and groom were to walk down the aisle, guests were asked to gather in the tent in the back yard. As they walked in, against the backdrop of a Flamenco guitarist, the attendees were dazzled by the white David Kurio-designed floral decor inside and knew the evening was about to get much more special. Chico Korth addressed the audience from the altar and after asking guests to put their phones away for a few moments, let them know they were indeed about to attend a wedding. Al and Amber made a grand entrance into the tent where the bride glowed in a Nicole Miller dress from Unbridaled with a pearl and beaded broach perfectly placed in her hair. Then, the officiate of the ceremony, John Scott, asked friends and family in attendance, “Will you love, support and protect Al and Amber through their lives together?” before the couple whispered their vows in an intimate way so that only they could hear themselves.

Following the ceremony, guests ventured to the main house for the cake cutting. The multi-tiered cake, in keeping with the white and crème color scheme of the wedding, was polka-dotted with beautiful, intricate ivory pearls and cream colored roses with rose sugar flowers and a floral base covering the bottom tier. After the cake cutting, the happy guests sipped on the couple’s two signature cocktails, Watermelon Martinis and Moscow Mules, while enjoying passed appetizers, as well as burgers and fries courtesy of P-Terry’s.

As the couple departed from the reception, they were showered with fresh, white rose petals by cheering onlookers. The bride and groom then invited guests to board luxury coaches for the after party at the home of Joe and Kirstin Ross, located close by  the wedding venue, where the fun continued for the euphoric guests well into the wee hours of the morning.

The couple, who have a mutual love for travel, plan on a globe-trotting, four-continent trilogy of belated honeymoon trips that will take place over several months. The couple jetted off to Amsterdam and Croatia in May, and after returning to Austin, they left for Europe on a romantic Italian getaway to Positano and Venice in July. Their third honeymoon will be a month-long trip in August and September that will include stops in New Zealand, Vietnam, the Maldives, Kenya, and Istanbul with a final stop in the city where the groom proposed, London.

They reside in Austin where Amber works in marketing, while Al is the founder of Royalty Clearinghouse, an oil and gas acquisition company.