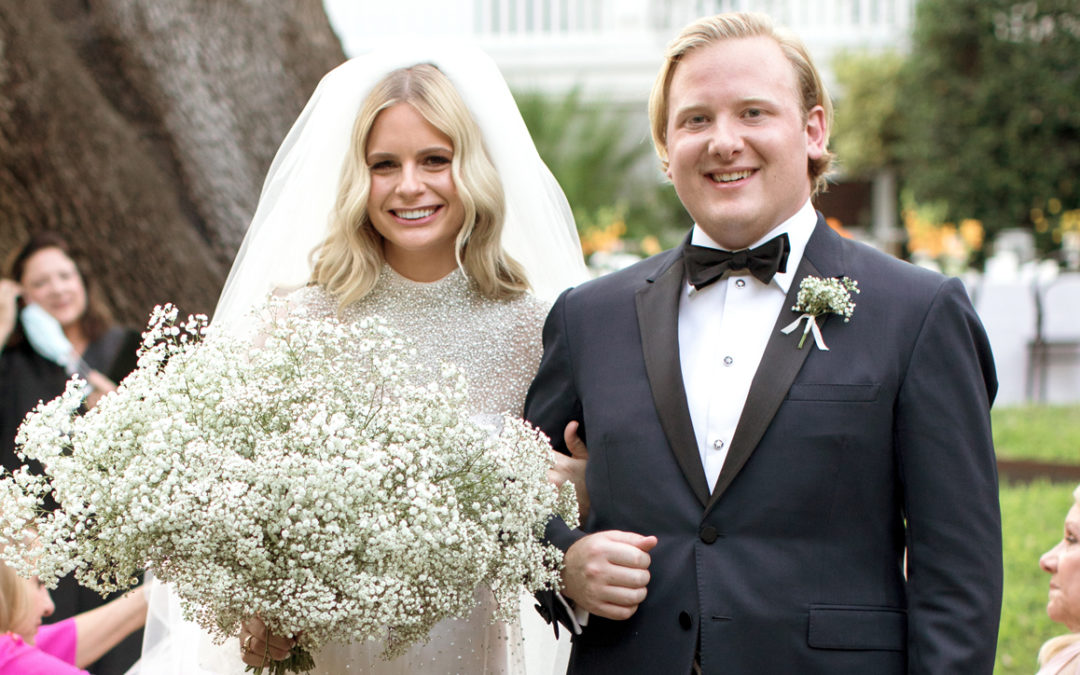 ALL YOU NEED IS LOVE

It was a match that was meant to be. Very modern in scope, Madeline Noal of Austin, the daughter of Denise Hyde, and Shawn and Teri Noal, and Samuel “Dustin” Dunham of Fort Worth, the son of Zoe and Mel Dunham, met in Manhattan, where they both lived at the time. The bride’s mother had a hand in the connection of the couple. While on a mother/daughter vacation in Cozumel, she hand-selected her daughter’s future groom, Dustin, from an array of gents on the dating app, Hinge.

The couple’s first date happened once Madeline returned to New York. “We hit it off right away. I immediately knew I had met the one,” shares the bride, Madeline Noal Dunham. “I called my mother right after and told her I would marry Dustin. When you know, you know.” That initial meeting led to their engagement when the groom popped the question inside Grammercy Square Park in Manhattan. Dustin, not missing a beat, proposed with a ring the bride’s father had given her mother, presented in a needlepoint box the bride’s mother made herself, and he even hired a photographer to capture the whole event.

The couple had initially planned their wedding for December 2020 at Casa Kimberly, the former home of Elizabeth Taylor in Puerto Vallarta, Mexico, with 150 guests. Instead, due to COVID-19, they decided to move up the date and have it in Austin at the St. Cecilia Hotel. “When the pandemic hit, we knew we couldn’t ask our loved ones to travel far, or internationally,” said the bride. “We knew we had to re-think everything–the location, the wedding size, and most importantly, we had to think of how to keep our guests safe. This wedding was absolutely perfect in every way and now I can’t imagine it having been any different.”

For the wedding rehearsal dinner, the duo chose Mattie’s, formerly Green Pastures, a favorite of the bride’s family’s long presence in Austin. Ever thoughtful, at the rehearsal dinner, the families gave each guest a custom mask, made of beautiful cream linen embroidered with a red ikat design, and requested that they wear them to the ceremony and reception. Early on the wedding day, the groom, Dustin, and all 15 male guests went on a skeet shoot hosted by the Dunham family. Armed with breakfast tacos from Maudie’s and pastries from Upper Crust Bakery, they wore custom shirts to remember the male-bonding morning.

The wedding ceremony, which occurred on the picturesque lawn of the St. Cecilia, was everything the couple hoped it would be for their 30 guests. The ombre shades of red, orange, yellow, and pink were ever-present for the event’s color theme that was created by the bride and her mother. The wedding planner was Amina Garrison of Wedding Day Girl in Austin. The bride wore a strapless wedding gown by Chantel Lauren, with an overlay tunic adorned with Swarovski crystal and pearl embroidery by Allison Webb. Her veil was a custom creation by Coutures by Laura, who customized the entire look. She used gorgeous remnants from the dress alterations to create beautiful face masks for the bride as well as her mother. Madeline’s younger sister, Alexandra Noal, attended her as her maid of honor and only bridesmaid. The groom, outfitted in a navy Burberry tuxedo, was attended by his father, Mel Dunham, and watched as his bride-to-be marched down the aisle on an antique family rug to a processional performed by a string quartet.

The bride’s mother’s best friend, Judge Rhonda Hurley, officiated the ceremony, while the bride’s best friend, Jordan Easter, read the e.e.cummings poem, I carry your heart. The groom’s twin sister, Melissa, read Colossians 3:12-15 while the bride’s uncle, Greg, lead the gathering in prayer. At the end of the ceremony, a small gospel choir, comprised of a mother and her sons, sang All You Need Is Love to the astonishment of everyone except the bride and her mother, who arranged the surprise.

As the fun continued at the reception at the St. Cecilia, guests after feasting on passed appetizers that included a charcuterie board, crab cakes, and crème fraiche and caviar atop of house-made potato chips were seated for dinner continental-style. The specialty cocktails created for the occasion were Madeline’s Margarita, Dustin’s Ranch Water, and Arthur’s Artini (a tribute to the duo’s one-year-old Goldendoodle, Arthur, who couldn’t attend due to his naughty nature but was there in spirit and in small details). A French jazz band played romantic tunes that the couple selected as ambience music before the bridal couple danced to I Got You Babe by Sonny and Cher. Then, the after party began. Madeline and Dustin invited all of the “kids” (everyone aged 40 and younger) to their suite and danced to a collection of vinyl records DJ’d by the bride’s brother, Nash, while popping bottles of Champagne until the wee hours of the morning.

The couple now reside in Beverly Hills, California, where the bride, who graduated from Ole Miss, The University of Mississippi, works as the public relations manager for the luxury beauty brand, Chantecaille Beaute, and the groom, a graduate of Baylor University, with a business graduate degree from Cornell University, is a senior associate at The Luzzatto Company in Los Angeles, a real estate private equity and development firm. “We delayed our honeymoon until after the pandemic,” confided the bride. “We spent the days after our wedding driving from Texas to our new home in Los Angeles, yet we spent our originally planned wedding date at the Rosewood Miramar in Montecito.”