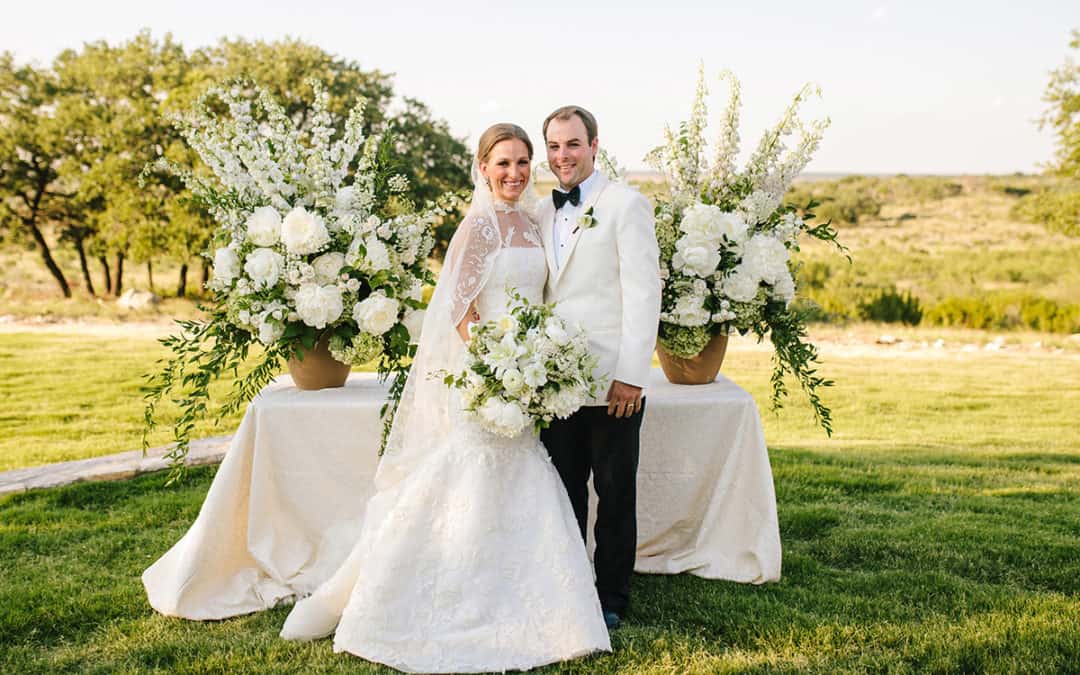 The Nuptials Of Elisabeth Uhl and Elkin Kleberg In West Texas

The ceremony of Victoria (Elisabeth) Uhl and Elkin McGaughy Kleberg was held under the wide-open West Texas sky. Elisabeth is the daughter of Lorrie and Arthur Gustav Uhl III of San Antonio, and Elkin is the son of Julie and Scott Masterson Kleberg of Fort Worth. The groom asked for the bride’s hand in marriage when the couple and his family spent New Year’s in South Texas quail hunting. He surprised Elisabeth by proposing in the pasture. Soon after the proposal, her family unexpectedly appeared, and the families celebrated the impending nuptials together over dinner.

The all-white wedding ceremony was held outside under the wide-open West Texas sky. Ivory and sand toned linens inspired by the landscape, anchored the dinner and reception design, and served as an earthy backdrop for the blue, green, yellow, and orange décor. The reception floral design, a collaboration between Cloche Events of San Antonio and Three Branches Floral of Dallas, was inspired by the region’s sunset and incorporated pink, yellow, and orange tones. The bride and their families chose the mother of the bride’s family land, Pecan Creek Ranch, outside of San Angelo, as the venue for the ceremony and its nearby festivities. With the reception taking place in a remote part of West Texas, on a hill overlooking a magnificent vista, the scaffolding and tenting took two weeks to install. The stage backdrop was designed by Cloche Events, who oversaw the planning of all the wedding details. In fact, the Cloche team, led by Laura Nell Burton and Christin Gish, met the challenges of hosting a summertime ranch wedding with logistical expertise, creativity, grit and love, every step of the way. They were inspired by a trip to South America when they were dating, and it was where they fell in love with the brightly colored architecture with its pink Bougainvillea climbing vines.

The rehearsal dinner was held at the Cactus Hotel in San Angelo and was catered by Bonnell’s of Fort Worth. The wedding was catered by the team at Perini Ranch Steakhouse of Buffalo Gap. The seated dinner featured their famous beef tenderloin and dusted shrimp. In addition, mini tequila bottle escort cards were implemented to direct the guests to place settings that were personalized with traditional blue and white Spanish Talavera tiles. Guests dined at gold and ivory place settings, with a mix of round and long tables adorned with candlelight and flowers. The couple left the reception in a 1987 Jeep Wagoneer that is an old family vehicle purchased by James (Jimmie) Powell and has been driven by three generations of the bride’s mother’s family.

Both Elisabeth and Elkin Kleberg graduated from The University of Texas at Austin, where they now make their home. The bride is employed with Endeavor Real Estate Group, and the groom works at ACG Partners. The couple, who honeymooned in Italy, have many mutual interests, including spending time at their families’ ranches, hunting, fishing, skiing, running, and exploring new places.