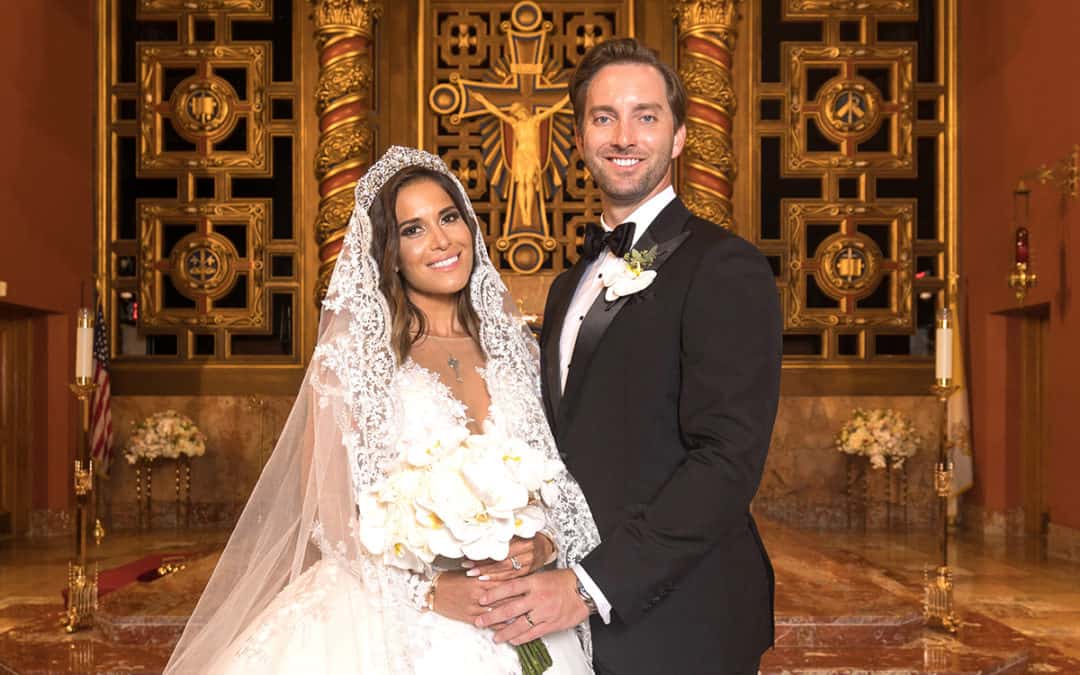 THE POWER OF LOVE

The Nuptials of Austinites Alexis Simón and Gordon Moore

Alexis Simón, the daughter of Alejandro and Elsa Simón, and Gordon Moore, the son of Jon and Marisa Moore, were recently wed in beautiful Coral Gables, Florida. The bride and groom initially met through mutual friends. They reconnected when Gordon saw Alexis at a local Austin gym where they were both members. Initially, Alexis was more interested in working out than striking up a conversation with Gordon. However, about a week later, Gordon noticed on Instagram that Alexis was attending a wedding in Cuernavaca, Mexico. “He decided to direct message me a fire emoji to get my attention,” Alexis Simon recalls. The couple was mutually attracted to one another’s philanthropic nature through giving back to their community. They decided to go on their first official date a week later by attending Ballet Austin’s Fête in the Fall of 2018, and the rest, as they say, is history.

After a year and a half of dating, Gordon was more than ready to pop the question, which he did in February 2020, but not without some serious improvising. “I coordinated with Rachel (Alexis’ matron of honor) to get Alexis over to the Four Seasons in Austin for drinks,” muses Gordon. “It was a cloudy, cold evening, and Alexis was reluctant to go outside.” Undeterred, Gordon was able to coax Alexis outside, but not before she saw her favorite photographer at the doorway. Gordon then got down on bended knee to propose to Alexis…with the photographer on hand to commemorate their once-in-a-lifetime moment.

Like many other engaged couples during the pandemic, the duo created a wedding that was as unique as their love. The couple was wed in a civil ceremony in September 2020 at the Four Seasons Mexico City, where the bride is from and where her family resides, knowing that a Catholic ceremony and reception with loved ones would be on the horizon once the pandemic lifted. A year later, the couple did just that, with 200 of their nearest and dearest joining them for a wedding celebration in Coral Gables, which commenced with a rehearsal dinner at Palm D’or in The Biltmore Hotel. The bi-lingual wedding, officiated by Bishop Joe Vasquez of Austin, included the traditional components of a Catholic wedding ceremony, including the arras and the lasso, in keeping with family tradition.

The bride’s favorite moment of the ceremony was arriving with her father at The Church of the Little Flower in a 1965 Rolls Royce Phantom. Alexis wore a custom gown by Benito Santos of Mexico, while Gordon wore a custom black tuxedo by Loro Piana. The ceremony went off without a hitch. Almost. With a surprise beforehand. “We were told that the church lost power for several hours due to rainstorms earlier on the day of the wedding. The power came on again just as Bishop Vasquez entered the church 30 minutes before the ceremony,” recalls Alexis with a laugh. A perfect sign to the couple that the power of love always conquers all. The wedding party consisted of ten house party attendants, fourteen bridal attendants, and ten groom attendants. Carly Bucklin served as maid of honor, Rachel Mullins served as matron of honor, and Daniel Price was the groom’s best man.

The wedding reception, held in the Country Club  Ballroom at The Biltmore Hotel, featured a white and gold color palette that perfectly complimented the timeless, elegant, classic theme. The bride slipped into a wedding reception dress designed by Essence of Australia. The bride and groom’s first dance was Fly Me to the Moon by Frank Sinatra, where Gordon, in his favorite moment of the ceremony, lifted up Alexis during the song’s crescendo, as sparklers went off around the perimeter of the dance floor. After dinner, as guests danced to the tunes of the Aragon Artists–Soirée band, they were treated to a French fry bar, tres leches, and NadaMoo! ice cream. The reception was capped off with an after party, which lasted until 5:00 am and included several members of the wedding party jumping into the pool, still in their gowns and tuxedos.

Both the bride and groom completed their undergraduate degrees from The University of Texas at Austin, and Alexis received an Executive MBA from Baylor. They reside in Austin, where they now make their home. The bride is a travel advisor with National Travel, an affiliate of American Express, and the groom is the National Sales Director at NadaMoo!. The couple, who honeymooned at the Four Seasons Hualalai in Kona, Hawaii, have many mutual interests, including a passion for fitness, travel, wine, and supporting non-profit organizations in Austin.