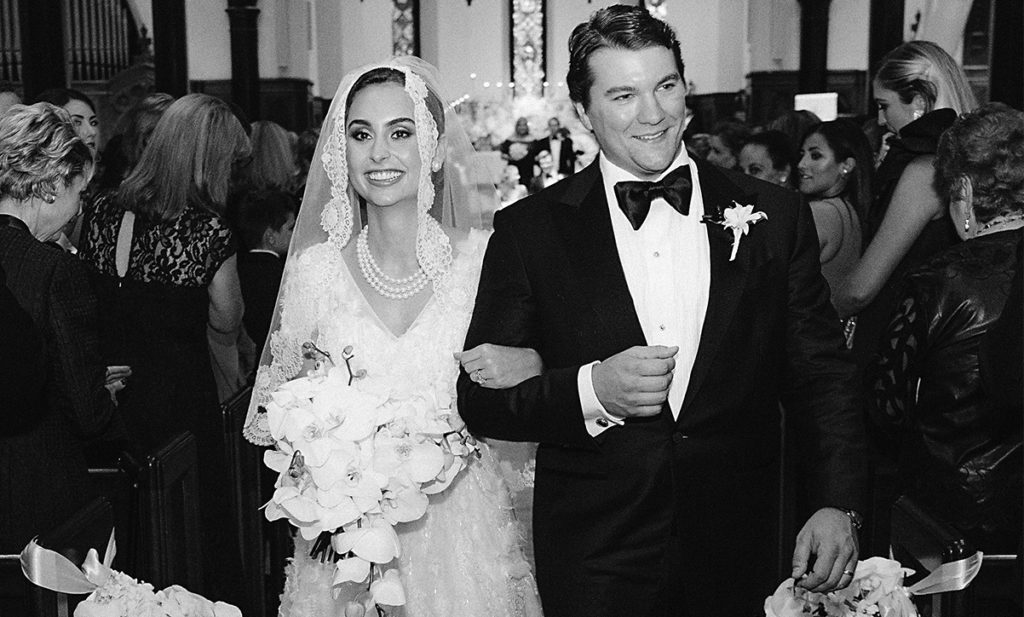 SOME KIND OF WONDERFUL

When the invitation to the wedding was received by 894 guests, everyone knew they were in for something spectacular. Frances “Carolina” Roberts, the daughter of Elizabeth and Barry Roberts and Andrew Jackson “AJ” Lewis IV, the son of Liza and Jack Lewis, all of San Antonio, enjoyed a two and half-year courtship and a one-year engagement, after initially meeting through the San Antonio German Club, a brahman social club in the city.

The couple was engaged in a truly fitting Texas-style…on the groom’s family ranch. With a bottle of 1995 Dom Perignon and monogrammed cups by his side, AJ asked Carolina to be his life mate while overlooking the ranch perched on the Pedernales River. “Before I knew it, I turned around and saw AJ on one knee, with a ring in his hand. It turned out our families were all waiting for the green light so they could come and meet us where we were. They came bolting down the hill with bells and whistles,” enthused the bride, Carolina Lewis.

The evening wedding, which occurred before the COVID-19 pandemic began, took months of planning for the grand weekend to happen in San Antonio. Billinda Wilkinson of Wilkinson Rhodes event production company and her team of international designers creatively directed the event, and Danny Cuellar of Trinity Flowers collaborated to  execute a magnificent design for the church. The wedding weekend’s festivities began with the rehearsal dinner for the family, wedding party, and out of town guests, at the Coates Chapel at the Southwest School of Art. The wedding venue, St. Mark’s Episcopal Church, was a magnificent setting with a mix of the bride’s favorite flowers. Under the direction of Wilkinson Rhodes, Danny Cuellar created the bride’s vision for the church including a floral armature specifically designed for St Mark’s Episcopal Church.

The bride walked down the elongated aisle wearing a dress that was a custom combination creation of Marchesa and Creviax by Javier Castillo. She wore a beaded pearl butterfly brooch, as well as an antique lace train that had been passed down for four McAllen family generations. “One of my favorite parts of the ceremony was when our Reverend Matt Wise asked me and AJ to turn around and look at the audience. He told the audience that the night before (at the rehearsal dinner) he had walked around the room and asked some of the bridesmaids and groomsmen, What do you love about Carolina and AJ’s love for each other? He then shared with us, and our guests, many of the sweet thoughts our friends’ had said the night before,” said Carolina Lewis.

Immediately after the ceremony, the newly betrothed couple joined the family dinner upstairs at The Argyle, while the wedding reception was in full swing below. “We enjoyed an intimate dinner with our parents before going out to the reception, which gave us a chance to relax, enjoy a cocktail, and sample all the wonderful foods being served at the wedding reception before greeting our guests,” remarked Carolina Lewis. The colors in the elaborately tented reception were hunter green, white, and blush pink, with shades of gold. It was a feast for the guests’ senses as over-scaled floral consisting of over 50,000 hybrid delphinium, hydrangea, larkspur, phalaenopsis, and garden roses arranged in unique floral designs welcomed guests at every turn. Upon entering the dinner, attendees were enveloped by a floral wonderland spanning the length of the tent. The ceiling was filled with over 5,000 stems of cascading flowers and foliage. The bridal party tables featured lush flower runners with arching floral garlands rising above them.

Since the couple had planned a honeymoon to Asia, there was an Asian flair to the buffet dinner with a selection of food stations astutely provided by The Argyle team. There were gorgeous De Gournay-style framed panels around the reception and a beautiful bar created with a series of brightly colored fans mixed with orchids and other tropical flowers. The bridal couple shares a love of food, especially sushi, so it was a treat to have three sushi chefs freshly preparing various rolls, nigiri, and sashimi, along with an incredible noodle bar with ice-cold Asian beer and sake pairings. The fresh seafood bar was topped with an exquisite ice sculpture of two kissing elephants whose trunks formed the shape of a heart.

The specialty cocktails also beautifully represented the couple with “his” and “hers” drinks. The “his” drink was a traditional margarita on the rocks, called a Spanish Spark named after the groom’s favorite drink, the Chispa, served at the famous Soluna Mexican food restaurant in San Antonio. The “her” drink was a twist on a French 75 cocktail called a Purdey Girl (named after the couple’s English cocker spaniel) and consisted of champagne, vodka, cranberry juice, with a large ice cube with small orchid flowers frozen in its center. The bride’s cake, created by Cakes by Cathy Young of San Antonio, was strawberry, with blush pink icing and filling. The groom’s cake was custom made by The Painted Cake. Half of the cake portrayed an African scene with a Baobab tree, elephant, campfire and tent, while the other half was a scene from their Fredericksburg ranch with personal touches to the bride and groom, such as their dog, Purdey. The cake was cut with a ceremonial sword from AJ’s maternal grandfather, Brigadier General James S. Billups, from when he attended the United States Military Academy at West Point. The fun continued in the dance tent, where the bar surrounded a two-story tree filled with over 600 stems of elongated, bright white, dripping phalaenopsis orchids, while the tent poles themselves danced with 25 feet of garlands of silver dollar and seeded eucalyptus and more than a thousand roses of different varieties.

Attendees at the reception enjoyed dancing to the Georgia Bridge Water Orchestra, from Jordan Khan Productions, and were also treated to a performance by Cris Cab, who was a wedding guest. The after-party was in the Coates Garden, the newest addition to The Argyle,  and had guests dancing the night away by music provided by D.J. Rooney G, in from New York.

The couple’s Asian honeymoon took them on an extended journey ranging from Bali to Japan, where they look forward to visiting again soon. They reside in San Antonio, where Carolina, a graduate of The University of Texas at Austin, has just started her own company with two of her cousins, and AJ, a graduate of Texas Christian University, is an executive at his family’s business, Mission Restaurant Supply. “In our spare time, we love to travel, go to the ranch and beach, cook, play with our dog, play backgammon, and spend time with each other’s families and friends,” said Carolina Lewis.