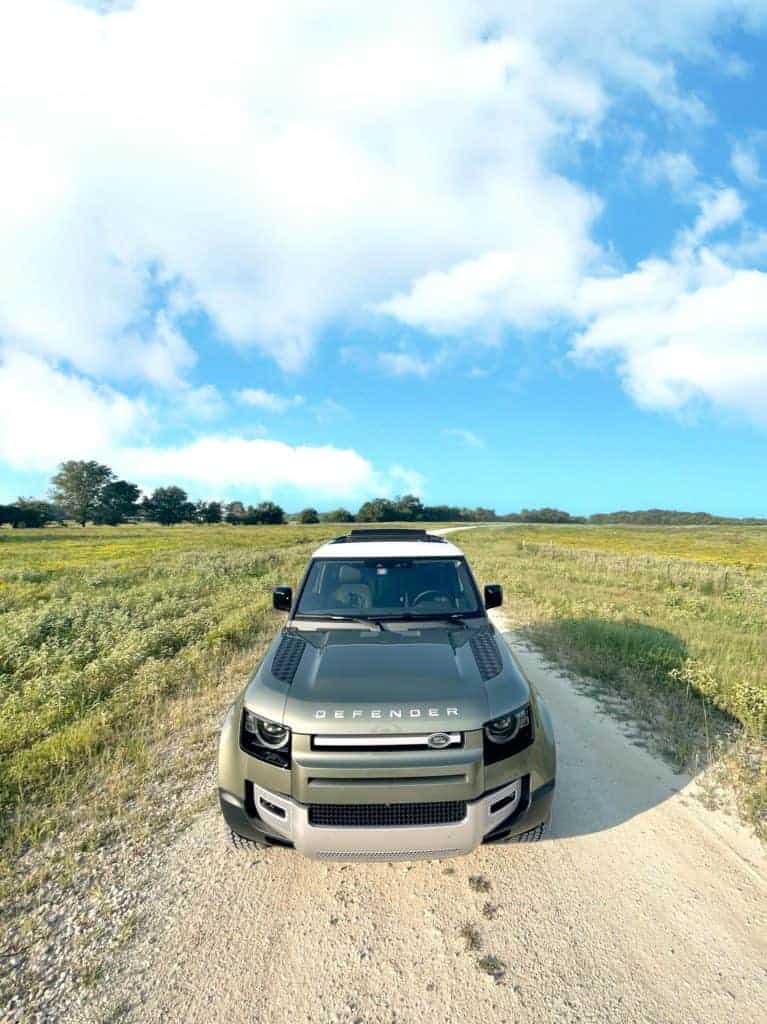 HOME ON THE RANGE

Few vehicles are as beloved as the original Land Rover Defender. The iconic off-roader gained a reputation globally for its rugged capability and broad appeal. You could spot almost anyone behind the wheel of a Defender…from the local farmer to the Prince of Wales, that’s how ubiquitous they are. It was considered to be the British equivalent of the Willys Jeep (the original Land Rover prototype was built on a Jeep chassis). In fact, the utilitarian design was part tractor and part passenger car. What started as a simple farm implement became an international icon and the legacy behind one of the most well-known luxury brands in the world.

In 2016, the original Defender’s over thirty-year production run came to an end, so replacing a vehicle beloved by so many would be a monumental task. The new Defender would need to harness the rugged image and styling of the classic Defender, yet in a modern package. Somehow the two-door 2021 Defender 90 ticks all the boxes, with its timeless retro style, rugged utilitarian interior, and the right amount of luxury without being pretentious. This isn’t an ultra-luxurious Range Rover; this is a proper go-anywhere off-road vehicle built for the country but still civilized enough to drive to the city. Plus, it looks even better once you get it dirty.

I decided to take the Defender out to its natural habitat, a country estate here in Texas, to put it through its paces. This model is the limited-production First Edition, which gets several upgrades over the base model, including a 3.0-liter V6 that produces 395hp, a front jump seat, white contrast painted roof, 20-inch wheels, Electronic Air Suspension, and several other technology features. But by far, the best option is the folding fabric roof that spans almost the entire length of the passenger compartment for when you want to feel the wind in your hair, and the sun on your face while driving down a narrow country byway.

Inside is sparse. The rubber floors, rugged door panels with exposed body-color sheet metal, simple controls, and weather-resistant materials cover the seats and dash. The First Edition has a unique leather and woven textile seating combination that looks like it will hold up to almost anything, a leather-wrapped steering wheel and gearshift knob. Looking graceful while getting in and out of the back seat is quite the task, yet with the front jump seat, the Defender 90 offers seating for six in a pinch. It is perfectly comfortable for four adults. Cargo space is limited, so plan on adding a roof rack if you want to haul people and luggage.

Meanwhile, back at the ranch, the Defender’s air suspension can be set in the Off-Road mode, which gives the little Rover 11.5 inches of ground clearance, while the base model with its standard coil suspension still offers 8.9 inches of clearance. Across the fields, streams, and through the woods, the Defender was confident, inspiring, and felt planted. When the trail gets tight, or there are obstacles to overcome, the standard surround-view camera system shows both front wheels, so no one has to get out to spot where the big rock is on the trail. The Terrain Response system also takes the guesswork out of off-roading.  Simply select the mode: Auto, Grass, Gravel, Snow, Mud Ruts, Sand, or Rock Crawl. Combined with the Hill Descent Control and All-Terrain Progress Control systems, the 90 can make almost anyone feel like an off-road hero.

While I don’t think you can go wrong buying any Defender, I would put my money down on the Defender 90 base model. With its simple mechanical suspension, 296 hp turbocharged four-cylinder, and an extensive ala carte options menu, you can be driving a Defender 90 for under $50,000. That is a deal considering a fully loaded Defender 90 X can come in at just over $90,000.

No matter which Defender model you choose, Land Rover has made it simple to add on four choices of accessories to fit any lifestyle. The $1,902 Country Pack includes mudflaps, additional scuff plates, fender flares, and even a portable rinse system. The $2,817 Adventure Pack includes gear racks, an integrated air compressor, and several other off-road-focused accessories. At $4,259, the Explorer Pack is designed for the hardcore off-road enthusiast and includes the Expedition Roof Rack, a raised air intake, and other overland-focused accessories. Finally, for the more urban explorer, Land Rover offers the Urban Pack at $1,317 that includes metal pedals, rear scuff plate, front under shield, and a spare wheel cover.

For those seeking the ultimate adventure, Land Rover has released the limited production Trophy Edition. Starting at $90,000, just 220 of this unique Defender model will be sold in the United States. Owners who opt to purchase the Trophy Edition will be invited to compete in an off-road adventure competition hosted at the world-famous Biltmore Estate in Ashville, North Carolina. The competition will consist of a series of challenges ranging from off-roading to teamwork and physical skills. The winning team from the U.S. will earn the chance to compete in the 2022 Eastnor Trophy Experience in the United Kingdom against teams from around the world.

The Defender is currently available at dealerships and is priced in the ballpark of the Jeep Wrangler Rubicon or a well-optioned Ford Bronco, but with the Defender, you become part of the legend. Even if you never take an adventure to a distant land, even driving the Defender to the grocery store feels more adventurous. Besides, who doesn’t need a little more adventure in their life these days?