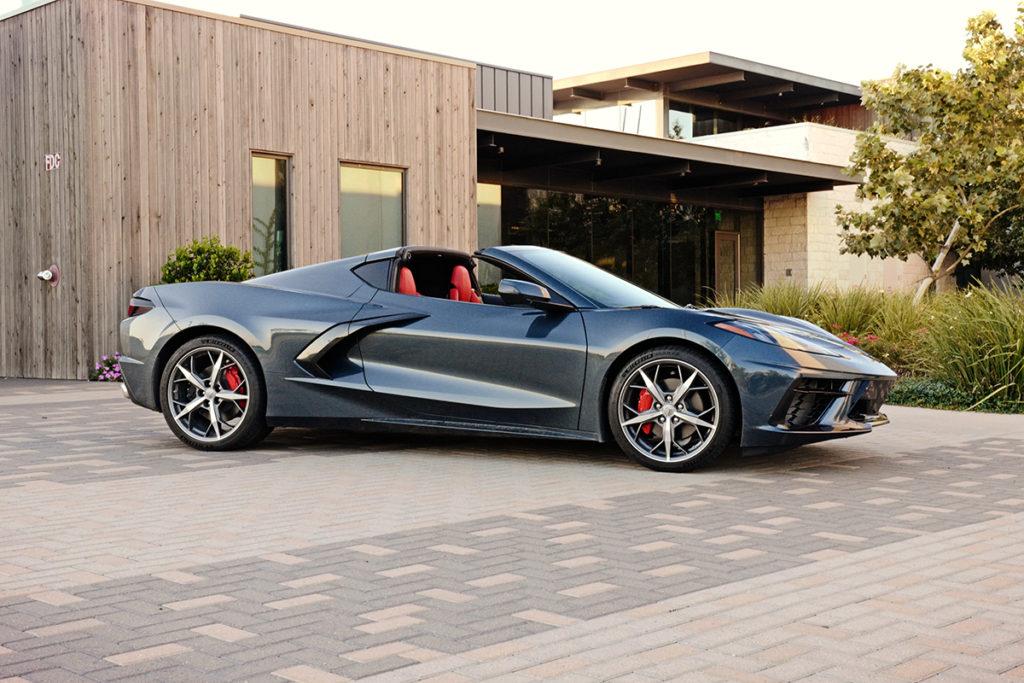 Some would say the Chevrolet Corvette, when it was introduced in 1953, was the most revolutionary luxury sports car of the era. Fast forward with our on-the-go Mike Satterfield of The Gentleman Racer.com, who unleashes the 2021 Chevrolet Corvette C8, the ultimate weekend warrior.

I must admit I didn’t know what to expect from the new Corvette C8. The first production mid-engine Corvette has the potential to be a blue-collar exotic, punching well above its weight. It has the look, but only driving it would determine if this new generation of American sportscar was a worthy competitor to the Italian and British supercars that have dominated the category for decades.

On paper, the C8 has much to offer: outstanding performance, stunning good looks, and a massive trunk (by exotic-car standards) that has the ability to carry a full-size golf bag. My first impression is it looks even better in person. Remove the Corvette badges, and most people would never guess they were looking at a car that costs about the same as a nicely equipped Volkswagen Touareg.

Blasting down the back roads of Texas, the C8 is everything you want in a sportscar: open-top, a great soundtrack, razor-sharp handling, and looks that draw attention anywhere you go. Park a C8, and there will be a crowd ranging from high school kids to much older car enthusiasts, all excited to see the new Corvette. While this will fade over time, as more C8s are delivered, this was the first American car I have tested that has ever drawn as much attention and interest as a McLaren or a Lamborghini.

The new C8 isn’t just cool to look at; it has the performance and handling to go head-to-head with other mid-engine sports cars on the market today. With a base price of just $58,900, the new Corvette is thousands less than the four-cylinder Alfa Romeo 4C and has a faster 0-60 time than the Audi R8, a car that starts at over $140,000 more. Add on the $5,000 Z51 performance package and the 0-60 time drops to match that of the Ferrari F8 and Ford GT, for hundreds of thousands of dollars less.

Also, it is fair to mention that unlike Ford or Ferrari, Chevrolet will simply sell you a car, without an application process requiring you to tell the manufacturer why you deserve to buy their car or contract to restrict your ability to sell the vehicle in the future. You can simply walk into the local Chevrolet dealer and place an order.

The C8 I tested did not have the Z51 performance package, yet did have some excellent options, bumping the price to just over $71,000, far less than any comparable exotic, but also within the range of most modern sports sedans and muscle cars. A Shelby GT500 starts at $74,095, a new Porsche 911 at just over $99,000, and the entry-level Aston Martin Vantage will set you back $139,000, making the C8 look like even more of a bargain. The real comparison to the supercars will be the Z06 version of the new Corvette, which is slated to be released in the 2022 model year. With its C8.R derived 600hp V8, active aero, and likely starting price at under $100K, it will be hard to justify buying any supercar for twice the price.

But it isn’t going to be enough for the new Corvette just to be a good deal. It has to be on par with the competition in performance, technology, and especially build quality. I drove a 2018 C7 Grand Sport last year, which had some quality issues I would not expect on a car with an MSRP of over $85K. The new C8 addressed my concerns from the previous generations. Not only does the Corvette handle, stop, and drive as you would expect from a modern supercar, it has the fit, finishes, and details of cars that are far more expensive. Unlike past Corvettes, the C8 doesn’t feel like a parts bin special, made of borrowed parts from other GM pickup trucks and passenger cars. Everything you touch in the car feels high quality and bespoke to the Corvette.

The other advantage the new Corvette has over the boutique sportscar manufacturers is it is supported by General Motors’ resources, which gives the Corvette the network and technology of one of the largest carmakers on earth. There is no oddball operating systems for the infotainment and HVAC, no $2,000 oil changes or phantom dealer network, and no wildly overpriced tuning required if you want to modify it. With a small block Chevy between the rear quarters, the automotive aftermarket has endless options for Corvette owners seeking more performance.

Before the C8, I never considered myself a Corvette guy. I liked them, mostly the classic models. But modern Corvettes never really appealed to me. I never found myself wanting to buy one, but one weekend in the new C8 made me a believer. In Sport mode, it is lively, loud, and fun, especially with the top off. Swap over to Tour Mode, pop the top on, it settles down and delivers an average of 22 mpg with a quiet cabin, perfect for enjoying the excellent sound system. Chevrolet managed to build a Corvette that can do everything: it’s a real working-class hero on a track day or canyon run, while still comfortable enough for a lazy Sunday drive or down to the local country club.

With two decent-sized trunks, a reliable American V8 in the middle, and a Targa top or full convertible, it is hard not to like the new C8. I drove the Corvette back-to-back against the McLaren 570S, a car that is over $130,000 more than the Corvette. While the McLaren was better, I don’t know if it was $130,000 better. The Corvette is not as raw as the McLaren, which has more of a sense of occasion since even at lower speeds, the 570S feels like a race car. Perhaps a better comparison would be the new McLaren GT, a vehicle designed to offer a better ride, more storage space–or even hold a set of golf clubs. But for the price of a McLaren GT, you could have three new C8s and still have money left over.

The Corvette is sporty, and with a few minor tweaks to the suspension, exhaust, and perhaps adding an aftermarket supercharger, it could be a lot more car for a lot less than its British and Italian counterparts. While we have had some American supercars before, like the Ford GT, the Saleen S7, and the SSC Aero, none have ever been so obtainable and realistic, making the C8 the perfect weekend (and weekday) toy.