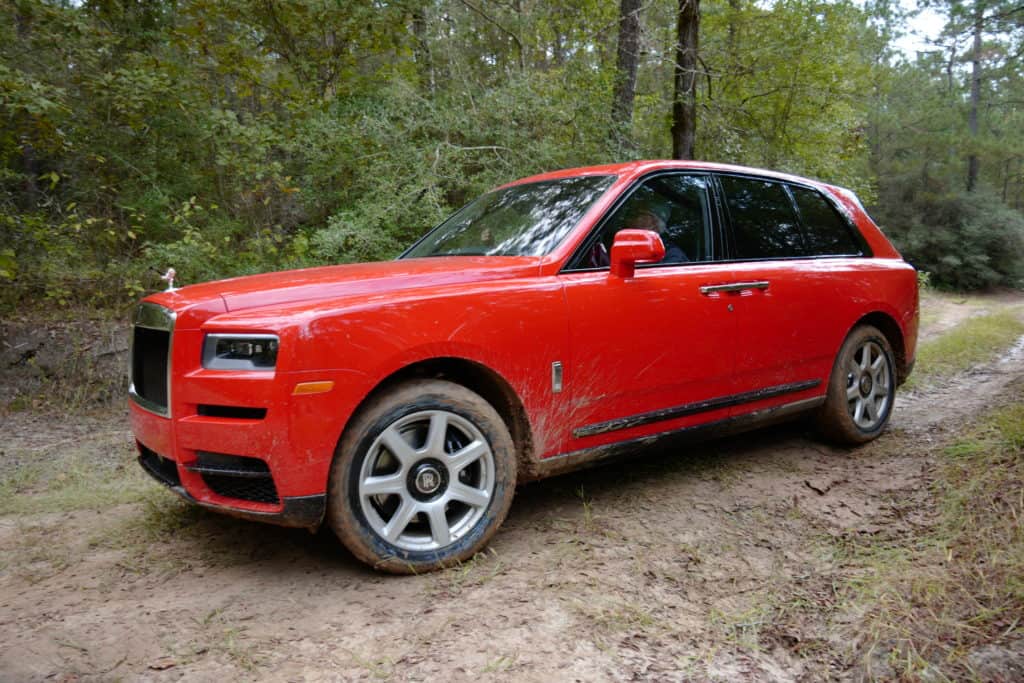 The Rolls-Royce, a luxurious car by anyone’s standards, has a new groove. Its Cullinan model, a super sleek SUV, offers something for anyone with a taste for high quality. Join our TheGentlemanRacer.com’s Michael Satterfield as he takes one out for a spin and leaves the city behind.

If you say “Rolls-Royce,” most people envision something like those 1980s Grey Poupon commercials, stuffy, aristocratic, luxurious, but somehow a bit dull. Modern Rolls-Royces are anything but boring, and with new products like the Wraith and the upcoming Specter, that is starting to change. One of the first and most controversial models to break the mold was the marquee’s first SUV, the Rolls-Royce Cullinan. Since its launch in 2018, the Cullinan has become one of the brand’s most important vehicles, but can the Cullinan handle the duties of an actual SUV? To find out, I took it to a $20-a-day off-road park in Huntsville for a day in the dirt.

The Rolls-Royce Cullinan I was driving costs nearly double the median home price in Walker County, Texas, where General Sam’s Off-Road Park is located. Most Rolls-Royces don’t see many country roads, let alone dirt roads. So, while the Cullinan has a button in the console that says “off-road,” hardly anyone uses it. Still, Rolls-Royce claims it is a capable off-road vehicle designed for oil barons and cattlemen who need to survey their vast landholding in the lap of luxury.

The shiny red Cullinan was outfitted with standard wheels and winter tires, the best option available for our adventure since 33-inch BFGs weren’t on the order sheet. This particular Cullinan is painted “Hell Rot,” which is basically fire engine red. In the country, it would be easy to mistake this massive bright red SUV for a volunteer fire vehicle speeding down a dirt road. All the Cullinan needs is some gold lettering on the door and ladder on the roof, and it would be ready for service in the local VFD.

I started off light, taking the Cullinan down some dirt roads and improved trails, but eventually, I headed to more advanced trails, which would be challenging for most stock SUVs. Surprisingly, the Cullinan took it all in stride. As I explored the trails of General Sam’s, I expected at some point to get stuck, requiring the backup truck to pull me out, but it never did. Unlike most SUVs with a plethora of switches, buttons, and levers to get into the off-road mode, the Cullinan literally has just one button to push, which simply says off-road. Just push it, and the Cullinan does the rest. After all, it would be indecorous to have to switch gears or get out of your heated seat to lock the front hubs.

I have never been so comfortable while off-roading, the perfect leather seats, isolation from outside noise, and the ability to focus simply on driving while the advanced Rolls-Royce off-road system figures out the rest. The same road scanning cameras and air ride suspension that make the Cullinan amazing to operate in the city makes it surprisingly capable off-road. The system is designed to take on deep snow, sand, mud, even fording streams. Once you reach your far-off location, deploy the optional Viewing Suite, and enjoy nature as Rolls-Royce intended.

Slow and careful is generally how you spend most of your time off-roading, but it wouldn’t be right if I didn’t see how the Cullinan could handle itself with a bit of speed. After all, there is a high likelihood that you might have to flee a rebel army or some international crime syndicate while driving your Rolls-Royce in exotic locations off the beaten path. Anything can happen, right? The Cullinan might be the size of a small army tank, but it is a fast tank that can power slide through mud, rip down dirt trails, and use all 563hp to shuffle uphill at great speed; you’d have a fighting chance at outrunning any Bond villains behind the wheel of it. In the world of SUVs, the Cullinan is in a league of its own. Even the Bentley Bentayga, one of my all-time favorite SUVs, has a starting price of just $177,000, while the Cullinan…has a base price of $330,000. But of course, being a Rolls-Royce means there are plenty of luxe options, and those options make the one I am driving come in at just over $417,000. Sure, for that kind of money, you could pick up three Range Rover Sport SVR Carbon Editions and still have money left over. Yet nothing makes the statement like seeing the Spirit of Ecstasy perched atop that imposing chrome grille, even when it is covered in mud.