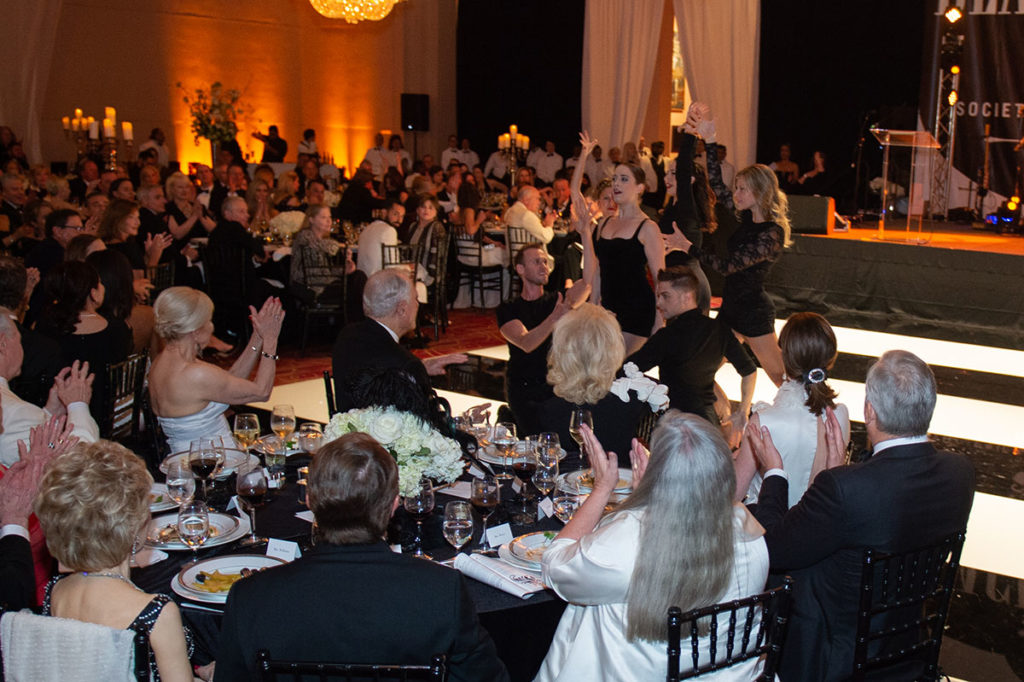 ON WITH THE SHOW

THE SETTING: The Society for the Performing Arts held its Black & White Ball at the Wortham Center Grand Foyer to celebrate over 50 years of bringing the world’s best performances to Houston. Reminiscent of the Party of the Century hosted by Truman Capote in New York City in 1966, the SPA Black & White Ball was indeed the party to remember this season.

THE STYLE: Over 400 black tie guests, clad in black and white with a dazzling array of bewitching masks, enjoyed cocktails and canapés while perusing the silent auction. Jackson & Co created a fabulous three-course meal and Rebekah Johnson created an elegantly over-the-top room décor with cascading crystal chandeliers installed above beautiful towering sprays of orchids and roses on the tables. Auctioneer Jeff Smith raised a record-breaking  figure from the fabulous auction curated by Yasmine Haddad. Guests were then mesmerized by the exciting performances of the cast of Chicago and then danced the night away to Empire 6 at the after party.

THE PURPOSE: The chairs for this unforgettable night raising over $500,000 were Mary Ann and David McKeithan and Cheryl and Sam Byington, with Margaret Alkek Williams serving as honorary chair. Rini and Edward Ziegler were the community honorees and HEB was the corporate honoree. The Society for the Performing Arts presents internationally acclaimed artists from the entire performing arts spectrum, traditional to avant-garde alike, from large orchestras and dance companies to recitalists and solo performers, for audiences at Houston’s Jones Hall.