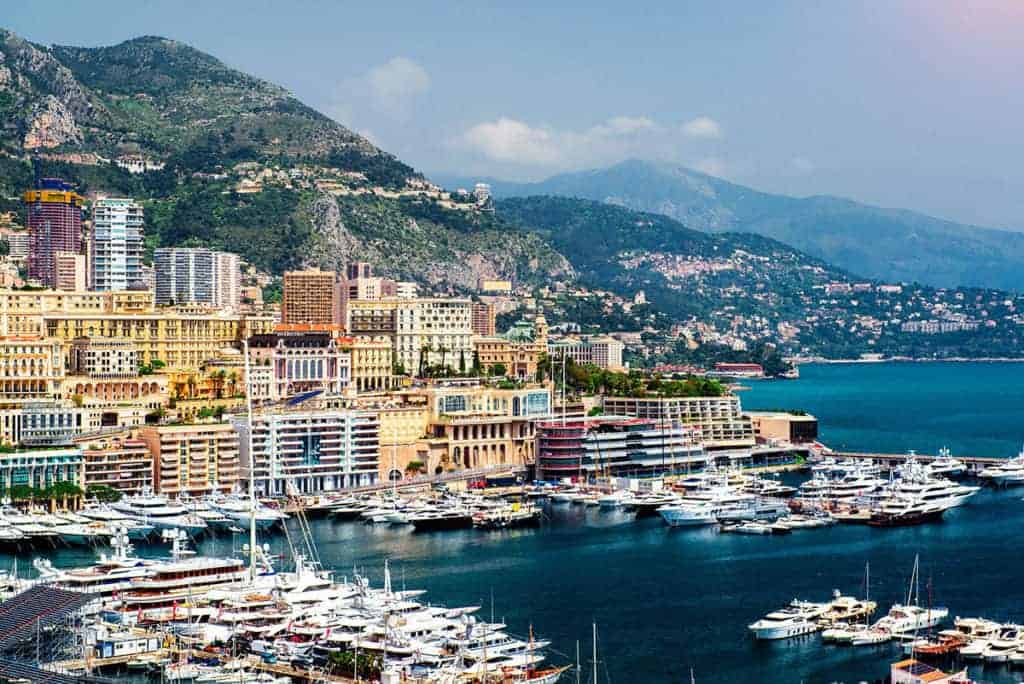 The South of France is always a favorite for visiting Texans. Especially, Monaco. Join our intrepid traveler Gordon Kendall as he jets to the French Riviera and reports on why the French and Texans love having a quality-filled vacation there.

If it has not been a year of travel, it has been a year of dreams…of travel. Where has your imagination, if not your passport, taken you? For some, the adventurous out-of-doors lures, while others seek to rediscover personal favorite haunts. Then, there are those who want to splurge. In recounting recent trips of pre-pandemic times, one delightful but too brief day trip to Monaco and the international luxury hub of Monte Carlo should inspire those sybarites. Yachts? Yes. High fashion? Of course. All the man-made luxury available set against a backdrop of incredibly natural scenic beauty. A sudden, impromptu glimpse of a genuine prince certainly wasn’t a detraction from the excitement.

Visitors to this famed Principality arrive as best they can: yacht tenders streak in and around Port Hercule, depositing the nautically endowed, and the heliport and helipads atop many a building welcome those who descend from the skies. Many a luxury car, often sporting custom colors and trims, huddle at hotel front doors like elegant dogs waiting for their owners to take them out for perambulations. Or, you can take the train and enjoy the breathtaking scenery it affords, as you travel, from either Menton or Villefranche-sur-Mer depending on your direction. On a clear, bright (if a bit hot) summer day, whether you look to the hills or along the stunning coast, it would be difficult to imagine a more beautiful setting.

Our own journey into Monaco that day began in a manner appropriate for a venue known for gambling. From our starting location lay the Italian attraction of Cinq Terre with Monaco in the opposite direction. As gambling has for so long determined Monaco’s fate, a coin toss, not a hand of Baccarat, settled Monte Carlo as our choice, and we set out from the station at Ventimiglia.

Our guide, an affable Brit named Paul Thompson, who makes it his business to squire visitors through this remarkable place, met us at Monaco’s modernist train station, and we were soon walking the sundrenched Quai Albert along the Grand Prix course. If ever there was a place with stories to tell, it would be Monaco. There are many recounts of famous cars, drivers, and races for car buffs, and related tours focused on those aspects of the place can be had. Of course, for movie fans, there are walking tours of the many locations used in films, such as Hitchcock’s 1955 classic, To Catch a Thief, and, to cover both cars and films in one go, Frankenheimer’s 1966 equally classic Grand Prix. What would tours of these kinds be without a bit of gossip? Our guide shared tib-bits about the apartments looming above us, all with price tags that would make those who spell money in any language with a “B” think twice. Interesting though were, our guide’s recount of the tiny country’s history, heroics of various car drivers, and its astronomical costs, still we slipped away in thought. How to describe a place about which you have always heard but are now actually there? For it was easy to see there were two faces to the Monaco we then encountered.

First, Monaco’s breathtakingly scenic side, a dramatic coastline outlined with beautiful cliffs and gardens, the majestic port laden with yachts of surreal proportions and designs, like creatures from name your Sci-Fi film waiting to return to their aquatic galaxies. Turn the other direction, however. There, towards the hills above where there are…buildings…and more buildings. Like so many boxes from Lawrence Graff, all stacked together, hurriedly, on top of each other, some seeming to tumble onto others. Each, precious and expensive, perhaps beautiful in its own way. How to know with each visually on top of the other? This chock-a-block image stood, in contrast, to the vista just a head turn away. Our guide had the answer to clear from our minds what he called these contrasting Legoland visions. Visit a palace. Specifically, “Le Palais Princier,” to see the changing of the guards at noon. Rediscover, in other words, that unique magic surrounding Monaco, no matter which way you look.

At the palace, in a throng a few minutes later, we stood, waiting, to watch as centuries of ceremony would be carried out for another day in front of the palace gates. Our experienced guide, however, sensed unfamiliar activity. The guards, as he put it, “are up to something.” Barricades suddenly appeared, lines of white-suited men formed, and around the corner appeared a phalanx. “Oh, good! We’ll maybe get to see Prince Albert,” he exclaimed. Then, in a brief flash, the princely coach out of the group went past.  With a quick nod of his head, one man in back turned and acknowledged the crowd as the processional streaked by and through suddenly opened palace gates. Were he mounted on a white steed, such a princely image would have made the scene most fairy-tale-like, indeed. All of us, however, standing in the Monaco noon sun, envied the air-conditioned practicality of this modern-day prince: a white Lexus 460 sedan.

The palace secured for another day, we set off inside on a tour of its for-your-eyes-not-cameras-only treasures. Since the group of us were not privy to invitations to the apartments we had passed earlier, the ornate palace of gilt and silk would be the closest we would come to experiencing similar ambiances. That said, who could not think the palace a perfect setting for such a style icon as whom we know as Grace Kelly, but was Princess Consort of Monaco, or, simply, Grace de Monaco?

One story of the fabled palace and its inhabitants is from fine art photographer Gray Hawn. She photographed Princess Grace’s last portrait before her untimely death in 1982. “Of course, Princess Grace was gracious and lovely and definitely a princess. Prince Rainier was funny and intelligent,” shares Hawn. “As a photographer, I’ve always had a dreamy love affair with France, and especially at the thought of photographing Princess Grace. The first time I went to Monaco, I stayed on the French Riviera, and when my room overlooked the Mediterranean Sea, with all of its lavish yachts, how could I not be in love with such a beautiful sight?”

Another Texan, Houstonian philanthropist Lynn Wyatt, has many fond memories about the south of France, especially since Princess Grace was a close friend. “I was there every summer for a long time, and I always enjoyed entertaining guests who would come visit,” she says. “Nancy Reagan invited me the first time. Then, I got a villa–I didn’t want to buy since home to me is Texas. I was fortunate to have met so many fabulous people while there–they stayed with me, and I stayed with them. How lucky I was to be able to do those things. Of course, Oscar would be there between his business in Houston and the Middle East.” In fact, so popular was Lynn Wyatt that her annual birthday parties, during the high summer season, became a legendary and coveted invitation.

Onward, we knew lunch was in order. Over Monaco’s own beer…a full-tasting malty brew with perhaps a hint of rose, we contemplated what lay ahead. Our bank balances prevented a full-on assault of the gaming tables, but visiting the casinos, at least their lobbies were gratis, as was wandering past the shops. Those shops. All your favorite brands present and accounted for, and a few that even give the most ardent fashion followers pause. As to their offerings? Fur coats in July to wear on chilly yacht evenings? A parure of diamonds in time for this evening? That handbag? Your credit card, please, and it was a business to do your shopping pleasure in this luxury-laden metropolis.

We sought another respite… from the sun in the lobby of The Fairmont Monte Carlo, complete with a frothy cocktail. More stores awaited our examination. Venetian shoes scattered with crystals in every style imaginable lured those ladies so interested in Rene Caovilla. The sartorial delights of Stefano Ricci promised to transform any man into being mistaken for an Italian count or, perhaps just as well, extremely rich. Across the way, another place caught our eye. “Pawn Shop” would be too lowly a description. No matter such comparisons, how could such a place not attract with its outrageous display of still shiny yet slightly faded luxuries? What we saw there, the once riches of others were now their costly cast-offs. Thus, they were all the more intriguing, n’est-ce pas? Their mystique being their own stories, indeed, as much as any image conjured by their brand. But what might these tales be? Were the many hubcap-sized gold Rolexes sold to pay off that one unlucky poker hand? The (very) many more Hermes Birkin bags deaccessioned in order to cover unexpected “expenses”? Or, were their former owners simply bored and burdened by yet another purse in their closets? The shopkeeper would just shrug if asked, so we didn’t.  Such stories may never be known, perhaps for the best. Isn’t it fun to wonder how the coveted become the commoditized in such a place as Monaco?

Had we stayed for dinner, of course, Le Louis XV, Alain Ducasse’s many Michelin starred outposts in the Hotel de Paris would be a draw. We heard from one lucky source that even the breadbasket with accompanying pots of hand-made butter was exquisite. Other intelligence revealed Marcel Ravin’s Blue Bay (with merely one Michelin star) at the Monte Carlo Bay Hotel and Resort is a wonderful choice for fine dining in an atmosphere slightly more contemporary and much less ornate than Chez Ducasse. We look forward to our next visit, or, perhaps, the one you will take there, to inform us better.

Our time running out, we made it past the beach to the cement steps near the Grimaldi Forum. Walking back to the station, we watched the bathers diving into the sapphire waters, truly sans souci. Back on the train to Italy, the brochure of the current exhibit, Histoire d’ Une Rencontre, which we saw at the palace, again intrigued us. As this was our first trip to Monaco, so, too, was the show about the first time then-Grace Kelly met always-Prince Renier III May 6, 1955.  From that “first date,” complete with meeting not only the Prince but also his pet tiger, came forth the engagement leading to her becoming the iconic Princess Grace of Monaco.

Upon reflection, something more came about from that meeting, did it not? Monaco’s image emerged and remains as being the place for dreams like never before and forever and eternal. Anything at all. A place where it’s possible to make your own dreams come true. Then at the altar for Princess Grace, or now at the gaming tables, for us all.  Show the world from the palace throne room or the yacht deck your own dreams did come true. Even icons have dreams, and in Monaco, those dreams remain for us all, and unlike almost everything else, there: no charge.

Show the world from the palace throne room or the yacht deck that your own dreams did come true. Even icons have dreams, and in Monaco, those dreams remain for us all, and unlike almost everything else, there: no charge.