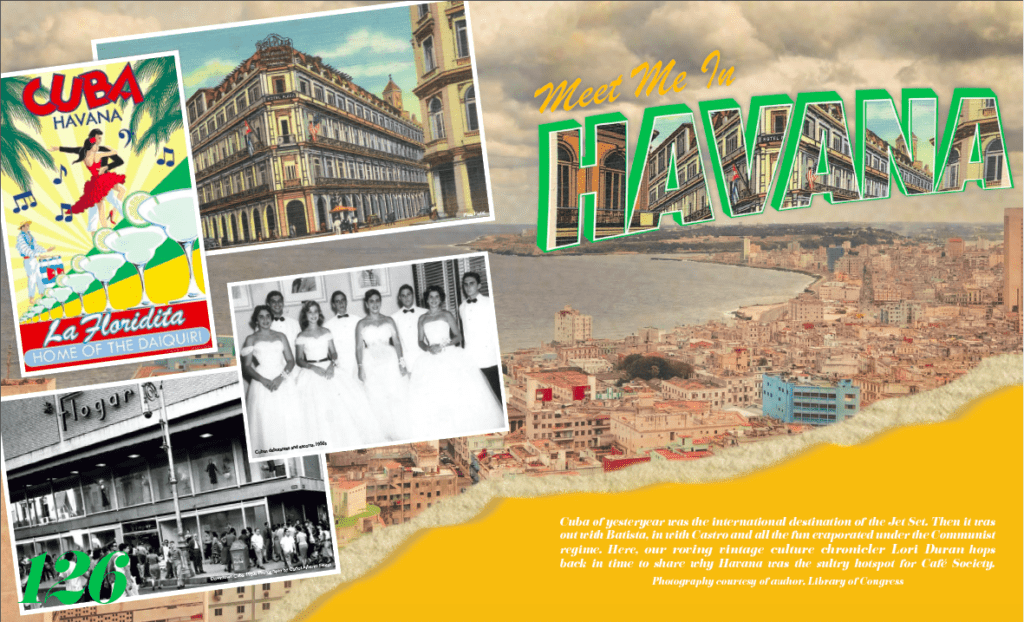 MEET ME IN HAVANA

Cuba of yesteryear was the international destination of the Jet Set. Then it was out with Batista, in with Castro and all the fun evaporated under the Communist regime. Here, our roving vintage culture chronicler Lori Duran hops back in time to share why Havana was the sultry hotspot for Café Society.

Photography courtesy of Library of Congress, Author’s Own

There is a reason why Havana was called the Paris of the Caribbean before the Communist regime took over. I still recall my grandfather telling me how he and grandmother never understood why the Cuban people turned to communism since they seemed to all be living a good life. Then my mother reminded me that her parents never ventured its city, when they visited. If they had maybe they would have seen some of the poverty in the countryside. But they only saw the inner city with its dramatic architecture and its beautiful suburbs like Miramar that went on for what seemed like hundreds of blocks. So, it appeared to be a land of plenty.

It’s been said that when Christopher Columbus first saw Cuba her described it as “more beautiful than any I have ever seen”. Sometimes I’ve also heard Havana was just a highly decorated watering hole mostly owned and operated by the American mafioso. But others have explained that Cuba was a successful and complex capitalistic society that had growing middle and upper-classes. Yes, it had casinos and mob-related business and also, diverse and homegrown economies. For example, it was an agricultural leader in the sugar industry which created wealth and sugar barons who were skilled at manipulating the markets for sugar.

Havana residents enjoyed their fast-growing economy, famed restaurants, fashion shows, coming out parties for debutantes, country clubs, beautiful beaches balmy weather. They also briefly had a Cuban Gran Prix. Many Cubans enjoyed the good life and the Cuban was firmly cemented into the Jet Set circuit of must-stays. It was this affluence that many saw when visiting the island just 105 miles from Florida. The Havana suburban homes were well-built and not dominated with tall protective fences surrounding them like they are in more impoverished countries.

Then came revolution and the Cuban president fleeing on January 1, 1959. George Raft, the Hollywood actor, was managing the Hotel Nacional in Havana at the time and was awakened by the sounds of gunfire that night. In the end, Fidel Castro was immediately successful in overrunning Havana and took up headquarters in the posh and just then recently opened Havana Hilton.

Havana had its share of world class hotels. The Havana Hilton had been built just before the revolution, at a cost of $24 million. The venue opened with five fun-filled days of festivities in 1958 and with Conrad Hilton himself in attendance, accompanied by his companion, actress Ann Miller. The Havana Hilton was Latin America’s tallest and largest hotel. In fact, it boasted 630 guest rooms, including 42 suites; an elegant casino; six restaurants and bars, including a Trader Vic’s and a rooftop bar; a massive supper club; extensive convention facilities; a shopping arcade; an outdoor pool surrounded by cabanas; and two underground garages with a capacity of 500 cars.

In the late 1950s work had also began on the Havana Riviera. Already envisioned as “The Riviera of the Caribbean”, it was considered the epitome of resort-construction, and was certainly one of the costlier hotels in Cuba. The hotel was not only near downtown Havana, it was advantageously close to residential Miramar and its Country Club. When the Havana Riviera opened on December 10, 1957, it was the largest purpose-built casino-hotel in Cuba or anywhere in the world at that time outside Las Vegas (the Havana Hilton surpassed its size a year later). The opening act that night at the Copa Cabaret was Ginger Rogers and her music revue directed by former MGM musical director Jack Cole.

The Hotel Nacional de Cuba where Raft fled for his life, also known as Hotel Nacional, was developed with a mix of styles including Sevillian, Roman, Moorish and Art Deco. The hotel was constructed in just fourteen months on the site of the Santa Clara Battery, which dates back to 1797. Parts of the battery has been preserved in the hotel’s gardens, including two large coastal guns dating from the late 19th century. Interestingly, it is speculated that the Eloise books by Kay Thompson about a mischievous  six-year-old may have actually been inspired by a Cuban girl who grew up in Hotel Nacional, not the Plaza Hotel that ended up being Thompson’s setting for the stories.

During the first half of the twentieth century was a time of unbridled prosperity in Cuba. The lives of many in Havana revolved around family gatherings and lavish social events. Cuba had a rich vibrant merchant economy including the formidable El Encanto department store known for its sizeable Christian Dior boutique.

Just before the revolution, the late 1950s were a magical time in Havana. Earnest Hemingway had stationed himself at the El Floridita where he helped popularize the Daiquiri cocktail. Havana was a compulsory stop for jet-setters and movie stars. The Havana night clubs featured entertainment like Nat King Cole at the Tropicana, Tony Bennett at the Sans Souci, Maurice Chevalier at the Montmartre and Frank Sinatra at the Hotel Nacional.

The only problem Cubans seem to have was their politics and their president. Never widely popular, President Fulgencio Batista had come to power as a dictator in 1952 and capitulated quickly by the end of December 1958 after finding out that he had lost all support and no longer was effectively in control. In stark contrast was Fidel Castro, a well-educated son of a wealthy landowner. Some Cubans, who had vast resources and much to lose, originally supported Castro in driving out and replacing Batista.

As soon as Castro, an authoritarian communist, took control of Havana his true intentions became apparent and those who had the means to escape did so. Cubans who had assets abroad were the lucky ones. Baggage of those leaving was limited to one suitcase per person. There are stories about people who had jewelry and pieces of their family silver taped to their bodies, sewn inside their clothing, or made other surreptitious arrangements to leave with as many of their valuable assets as possible.

So many years after the communist revolution there is still hope for a return to more freedoms and a return to prosperity. They physical decay of Cuba since the revolution is well documented. Isadora Tattlin wrote in her book Cuba Diaries: An American Housewife in Havana, when flying into Havana in 1990 that as their airplane descended for landing her view out of the window was described as, “…we see houses and roads. We search for cars. There are none; then, closer, we see one, moving patiently. Closer, we see Olympic-sized swimming pools with (now it begins) no water in them, with high platforms for diving boards but no diving boards, just bent rusted metal supports. We see rusted metal supports for billboards; the billboards having fallen off long ago.”

Cuba’s economic losses and decay s has caused great suffering and poverty. It’s understandable that anyone questions whether the Cubans really needed this revolution. Hopefully capitalism will return, and travel restrictions will continue to relax so that someday again Cubans can live well and Americans can more easily travel to Havana with hopes of a glimpse of its glamorous tropical past.