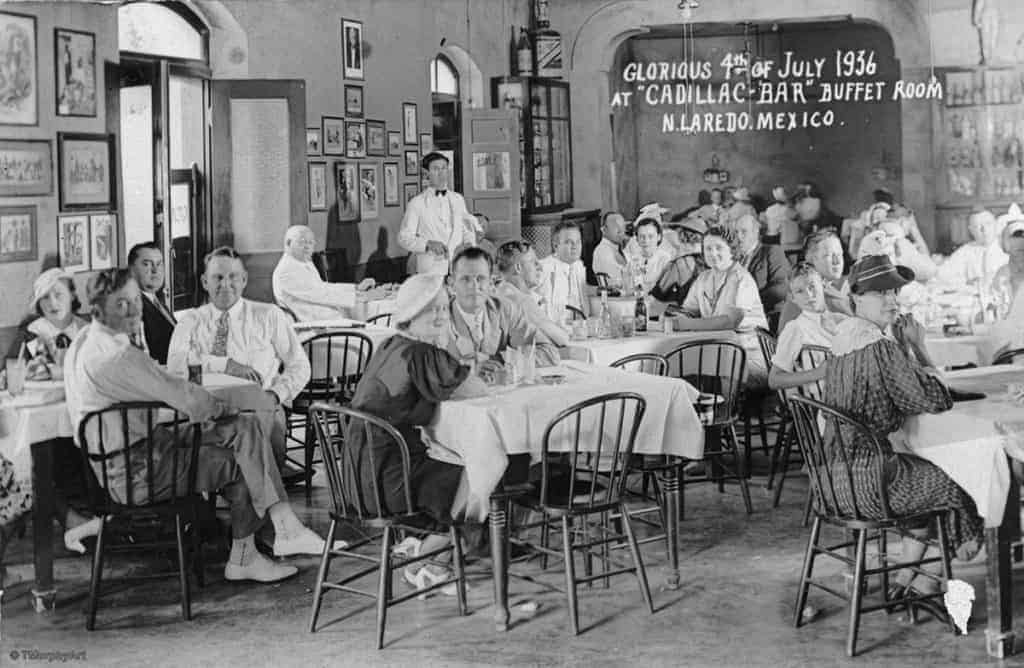 MEET ME AT THE CADILLAC

The famed Cadillac Bar in Nuevo Laredo holds special memories in the hearts of so many Texans. A destination of its era, the nostalgia for the fabled Mexican bar and restaurant lives on, according to our Texas pop culture chronicler, Lori Duran.

I can still remember stepping into the venerable Cadillac Bar. The spacious interior was both casual and refined. Everywhere I looked, besuited waiters were attending to every table. The food coming out of the kitchen looked heavenly. And the enthusiasm of the clientele was palpable. We had driven from Corpus Christi to Laredo, parked our car at the shopping mall on the border, and simply walked across the international bridge into Nuevo Laredo, Mexico. It was an easy walk and I have such fond memories to this day.

Wanda Garner Cash, the granddaughter of the original owners, also shares her insight, from her new book, Pancho Villa’s Saddle at the Cadillac Bar: Recipes & Memories. “The Cadillac was a special place that served exotic food and cocktails in a comfortable atmosphere,” says Cash. “It was unlike anything else. Prohibition in the U.S. had brought about the creation of this legendary watering hole. Maybe we thought it would last forever. Unfortunately, Mexico was not altogether business-friendly. And the Cadillac weathered storms and changed hands by the time it finally closed 11 years ago.”

It all started with Mayo Bessan, an ambitious bartender and waiter in New Orleans. Bessan worked at several establishments, including Henry Ramos’s renowned Imperial Cabinet. In 1920, Bessan’s career was halted with Prohibition in the U.S. And just a couple of years later, he left his honeymoon early to travel to Nuevo Laredo, Mexico, to seek opportunities for life and livelihood. The city appealed to him since business was booming on both sides of the border. Bessan and his wife eagerly moved there, and he took his southern Louisiana recipes with him.

The 1920s brought prosperity to Laredo and Nuevo Laredo, especially as Prohibition hung over the landscape and attracted visitors south of the border to wet their whistles. Laredo, then known as the Queen City of the Rio Grande, was a major port of entry for goods coming into the U.S. Bessan saw this as an opportunity. In 1926, he opened a genteel drinking hole and restaurant in Nuevo Laredo, titling it with the rich-sounding name, Cadillac Bar, formerly known as Cabello Blanco (White Horse). Bessan hoped the elevated name would lure respectable Texans inside. Did it ever. Instantly. The customers came, all dressed to the nines, by bus, car, train, and airplane. Bessan infused the menu with Creole flavors and lured his buddies from south Louisiana to be the cooks. The Louisiana friends also organized a gambling operation in the backroom since it was legal in Mexico.

The establishment offered nice cocktails, as they were touted then, which would become an understatement with its future reputation. Meanwhile, the kitchen offered seafood and delicious sauces, and things went well as the social headquarters among the sprawling, arid landscape of South Texas into Mexico. Business was profitable, even during the lean depression years in the U.S., which was then followed by an economic downturn in Mexico. But, Americans would pay for good food and drinks despite the tough times. For more than half a century, Bessan’s restaurant attracted notables, politicians, and ranchers as well as plenty of tourists who would come to shop and eat in Nuevo Laredo and stay at the gracious La Posada hotel in Laredo.

The Cadillacs famed drink, the Ramos Gin Fizz, was a frothy concoction that Bessan learned to make in New Orleans and taught his bartenders to replicate. The notoriously labor-intensive drink requires a plethora of shaking, but it was worth the effort because it quickly became a customer favorite. In 1949, the Roosevelt Hotel in New Orleans contested Bessan’s use of the Ramos Gin Fizz title because the Roosevelt’s owners had trademarked it in 1935. So, the Cadillac changed the name to New Orleans Fizz, but everyone knew its pedigree. The food menu included Louisiana specialties such as shrimp gumbo, grilled quail, frog legs, and turtle soup. It also featured TexMex favorites such as guacamole and enchiladas and plenty of mouth-watering frosty margaritas when a gin drink wouldn’t do. With the respected bar and cuisine, linen tablecloths, and impeccable service, the Cadillac was a popular destination along the border.

The Cadillac had a broad following, from Texas Jet-Setters to shoppers lured by the silver jewelry and pottery. Beyond the city on nearby leases, hunters were beckoned by dove, deer, and quail. “It was my father, Epitacio R. Resendez III (1928-1991), who used to call The Cadillac Bar his office and would actually give out their phone number 2-00-15 as his own,” says San Antonio and Laredo resident, Epitacio R. Resendez IV. “He would always be at the corner of the long bar to be close to the phone, since most calls were for him anyway.” Even though the Cadillac bar was a celebrity in its own right, in 1952, Marlon Brando and Anthony Quinn visited when they were filming Viva Zapata! about the legendary Mexican revolutionary of the region, Emiliano Zapata.

Perhaps it was the atmosphere and Mexican folklore that so many loved. Regular patrons had their usual waiters, whom they knew on a first-name basis. Outfitted in white jackets and black bowties, servers made sure that drinks were already arriving at the patron’s table by the time they sat down. Now that’s service. The atmosphere was enhanced by the décor. The Cadillac kept a saddle on display that once belonged to Pancho Villa, which survived a devasting flood in 1954 that affected much of the region.

Natural disasters aside, Mayo Bessan died in 1969, and his son-in-law Porter Garner continued the Cadillac for the next ten years. In 1979, Garner turned it over to the employees as he had grown tired of dealing with the Mexican government and the unions. Reportedly crooked bureaucrats demanded multiple payments to renew their license, and annual taxes were based on the single best weekend each year, and everything was taxed. The Garners took their family treasures, including Pancho Villa’s saddle, and left. The South Texas-based Longoria family, Ramon Salido Longoria, bought the Cadillac in 1980.

In 1991, reportedly, a Longoria family feud split the establishment effectively in two. One of them renamed the original site as the El Dorado. While another Longoria, with his partners, took the Cadillac Bar name and moved it to a new location. In the 2000s, business started slipping as violence broke out among the drug cartels in the area. Within a few years, the violence escalated, and tourism slowed tremendously in the vibrant border town. The New York Times had once called the Cadillac “The best run and most delightful watering hole” on the U.S. and Mexico border. But by the early 2000s, the drinks were still being poured even though the throngs of visitors slowed to a slow stream. The El Dorado struggled until 2010 when it closed. In the end, the famed institution had few customers brave enough to visit. The same cartel violence also claimed some of Nuevo Laredo’s beloved shopping sites.

The legendary establishment is gone, as are those carefree trips across the border. But the Cadillac food, drinks, and reputation created a powerful lure that inspired others in the tourist-dependent area. In 1977, George Jackson and partners opened their version of the Cadillac in Houston. By 2016, Houstonian Tilman Fertitta owned four Cadillac Bar locations in Las Vegas, Houston, Kemah, and Lake Charles. There were also separately owned Cadillac Bars in San Antonio and San Francisco. These outposts had similarities with the original, but they could never match it. The original, as in most cases, is usually the best.

Recently, there has been a revived interest in the Ramos Gin Fizz, thanks to the robust craft cocktail trend in Texas. The recipe for this infamous concoction as well as other favorite dishes from The Cadillac Bar can be found in Cash’s book,  Pancho Villas Saddle at the Cadillac: Recipes & Memories, which is available at bookstores such as Amazon and Barnes & Noble.

juice from one lemon

Mix all ingredients in blender.