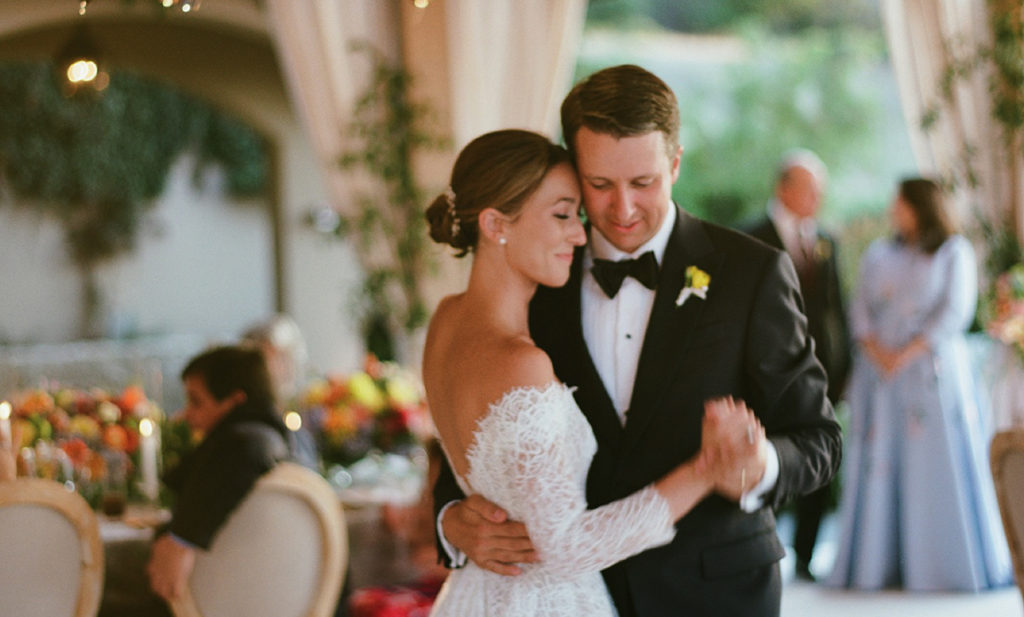 An elaborate engagement proposal would set the stage for the spectacular wedding of Sarah Elizabeth Requa, the daughter of Penny and Paul Loyd, and Jack Requa, and Samuel Finley Ewing IV, the son of Beth and Fin Ewing. The Texans were married at the Redwood Grove at Santa Lucia Preserve in Carmel Valley, near a home of the bride’s family. The bride had always dreamt of having her wedding in a ceremony surrounded by family, friends, and sky-high redwood trees.

The bride, from Houston and a graduate of Southern Methodist University, and the groom, from Dallas and a graduate of Texas Tech University, are admittedly opposites that attracted. They have very different preferences in cuisine, entertainment, sports, hobbies, and thermostat settings, according to the bride. “It’s an interesting social experiment at our house, but somehow it just works, and we end up meeting in the middle and enjoying our time together,” mused Sarah Requa Ewing.

When Finley proposed to Sarah, after a courtship of three years, they were visiting her family in Houston. She thought she was getting dressed for a fundraising gala, and as they were about to depart, Finley proposed. A dinner had been planned afterwards with family and friends, who were waiting to celebrate the momentous occasion. “I wanted to make sure that Sarah was completely surprised. I told very few people until just before the big proposal day. Everything worked out better than I could have expected,” shared the groom, Finley Ewing IV. The exquisite wedding, adapted to COVID-19 protocol, was artfully curated by Sarah Fay Egan Events of Dallas, who helmed the nuptial’s logistical and creative planning from near and far. Pastel shades of blue and green, along with the venue’s indigenous Cypress trees, were artfully integrated into the décor. A floral arch, where the bride and groom gathered to exchange their vows, was gorgeously colorful and beamed in the middle of the redwoods’ ambiance, providing the perfect backdrop for the union. The Santa Lucia Preserve is located on 20,000 acres of stunning coastal California landscapes, just a few miles inland from Carmel-by-the-Sea.

The ceremony, officiated by Kit Case, was moving for all who were there to witness it, especially the groom as he saw his future bride for the first time as she walked toward him on the arm of her father, Jack Requa. She was resplendent, wearing an ethereal Monique Lhuillier gown, and a veil adorned with Alençon lace, while carrying a bouquet by Fiona Floral. “I am usually not a crier, but when I saw Sarah come around the corner from behind the giant redwoods, I couldn’t help myself. She looked absolutely stunning, and I felt like the luckiest guy in the world,” said the groom, who wore a custom blue suit. The groom even donned custom made boots by Roma, and also outfitted each of his attendants with custom made boots.

Some of the wedding party were unable to attend due to the pandemic and California’s gathering restrictions, yet they were there in spirit. Jessica Requa Pinnell, the bride’s sister, served as her matron of honor, and the bride was also attended by Christie Loyd, Emma Rose Loyd, Lloyd and Gail Ewing, while Hayden Rome was unable to attend. They wore pale grey dresses and carried bouquets laden with silk ribbon streamers. The best man, Charlie Ewing, the groom’s brother, and groomsman Kelly Loyd were on hand, while the other groomsmen, Harrison Holmes, Matthew Requa, and Dodger Lambourn, were unable to attend. Hudson Pinnell and Parker Pinnell, the bride’s nephews, were the ring bearer. The duo’s dog, Phoebe, was also an attendant, with a specially made floral leash and collar. The couple and their families sent each guest a bottle of champagne and a pair of flutes to toast with them from afar while they watched the wedding ceremony online.

The weekend’s festivities began with a rehearsal dinner held on the back lawn and poolside of the bride’s parents’ home, with a beautiful view overlooking the Santa Lucia Preserve. Following the ceremony, there was a seated dinner for 24, down from the originally-planned guest count of 350. The theme of nature was effortlessly entwined with the embroidered dinner napkins―female guests had a blue hydrangea, and the mens’ napkins sported a cypress tree design. And, anyone who knows the couple’s families were not surprised to see the groom’s father, Fin Ewing, sing a few songs, while the band, Entourage, provided other entertainment that evening. The bride, who is 25% of Japanese descent, was thrilled that her grandmother (who is Japanese) hand-crafted a thousand origami paper cranes herself that floated above the reception’s dining area, said to represent what the heart desires, offering another unique family tie to the momentous weekend. “This is proof that a small family ceremony can be even more gorgeous than the original plan,” gushed the bride, Sarah Requa Ewing. “We loved how the traditional elements of a large wedding were still perfectly infused into our own version.”

The couple resides in Dallas, where the bride is a freelance artist and the groom is an executive with Ewing Automotive Group. They love to travel together and like to listen to music while playing outside with their dog. Sarah and Finley honeymooned in Cabo San Lucas and plan to visit Italy when international travel resumes.