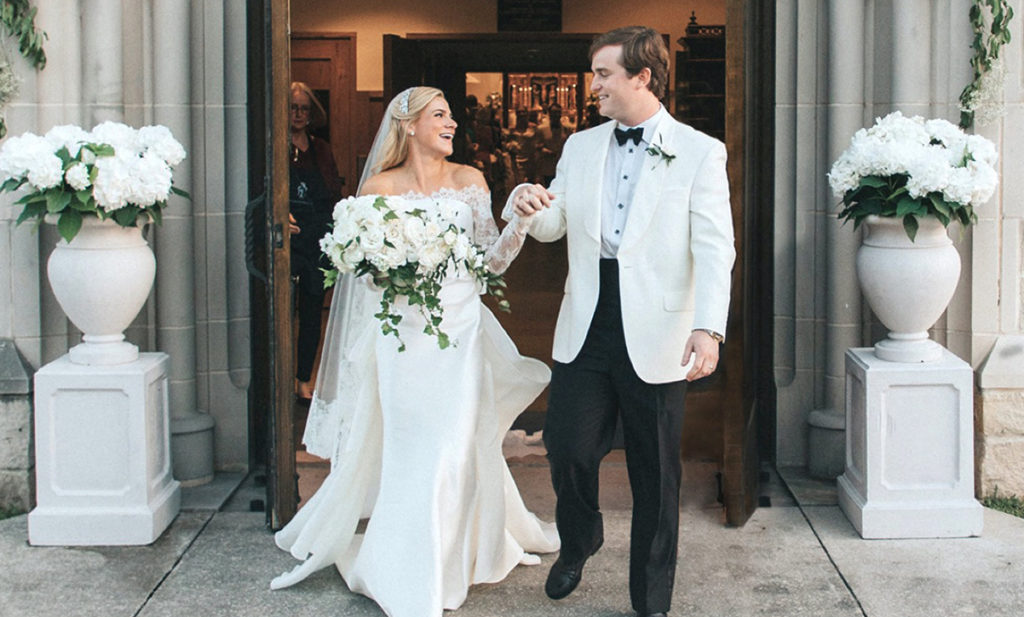 IT HAD TO BE YOU

Native Houstonians, Mary Alex Knight, the daughter of Risse and Kevin Knight, and Carter Mizell, the son of Chris and Mike Mizell, are not only alumni of The University of Texas at Austin and Episcopal High School, but are also pre-school alums as well. It was in their kindergarten class, where Carter first developed deep feelings for Mary Alex. He decided the best way to deliver his sweet thoughts would be to impress her with his literary talents through the gift of a note. To not leave anyone in suspense, the said note, of course, was saved over the years, and printed on the cocktail napkins for the rehearsal dinner and wedding reception for guests to enjoy the origins of the couple’s relationship.

As they both needed time to mature a bit, they did not rekindle their romance until much later. At which point, the couple then dated for seven years and enjoyed a ten-month-long engagement before family and friends cheerfully gathered to share in their loving, joyous union and celebrate the couple’s life-long adventure together.

The bride was genuinely surprised when Carter proposed. Mary Alex shared that she jogs the Houston Country Club golf course when it’s closed. “Carter asked me if I wanted to run the course with him…on a July day…in blistering Houston heat,” she mused. “I thought it was a terrible idea, yet agreed to go. When we went around one of the tee boxes, there was a bench with flowers and champagne, and that’s where he proposed. It was completely unexpected. Carter had arranged for our families and friends to be waiting back at the clubhouse to celebrate. The next day, both of our families, longtime mutual friends, went to my grandparent’s home in Hunt, Texas, where we continued to celebrate over the weekend.”

The wedding, held pre-COVID-19, was a grand celebration that began with an elegant rehearsal dinner at the River Oaks Country Club. The final line of the groom’s toast at the rehearsal dinner was: If you haven’t locked it down in Pre-K, best of luck to you

Mary Alex’s bridal gown was selected by Joan at Joan Pillow Bridal Salon. The designer, Italian based Le Spose Di Giò, whose dresses are still constructed in authentic creative workshops, designed the exquisitely customized gown. The intricate lace bodice, with off the shoulder sleeves, draped into a flowing floor-length silk organza skirt, secured at the back with an elegant bow and a lovely flower. The French cathedral length veil in a delicate Chantilly lace was by Romona Keveza. The bride’s crystal and mother-of-pearl headpiece was designed by Maria Elena. Like her mother, Mary Alex wore her veil during the reception for her first dance with Carter, the cake cuttings, and the toast. The mother of the bride wore a Monique Lhuiller botanical skirt with a custom organza blouse, and the groom’s mother wore a Catherine Regehr evening gown.

The couple chose a traditional southern style wedding menu consisting of fried chicken, mashed potatoes, green bean bundles, and seafood gumbo, amongst other delectable choices. The scrumptious buffet was adorned with oversized floral arrangements, tapered candles, and crystal candelabras. The bride and groom toasted with the bride’s paternal grandmother’s sterling silver goblets after cutting their five-tier cake adorned with fresh flowers by Marlene Romero. At the end of the evening, the new couple added to the festivities by celebrating Cinco de Mayo a day early. Mini margaritas, chips and queso, and mini tacos were passed, rounding out a true Texas culinary extravaganza.

Kelly Doonan Events meticulously executed the wedding, and the beautiful floral décor was designed by Susie Miller. The Georgia Bridgewater Orchestra had revelers up and on the dance floor, with photographer Marco Wang not missing a beat capturing and preserving all the magical moments. There was a unique, entertaining photo wall at the reception with rehearsal dinner, wedding ceremony, and reception photos projected for guests to view in real-time. Also, guests were welcomed to take boxed slices home of the bride and groom’s cakes, upon their departure from the reception, to eat with their coffee the following morning.

The Mizell’s left the reception, driving a vintage Packard bursting with flowers. They honeymooned for a glorious two weeks in Switzerland and the South of France before returning to Houston, where they will reside. The bride is a teacher at River Oaks Baptist School, and the groom works at Newmark Knight Frank in commercial real estate. The couple resides in Houston.