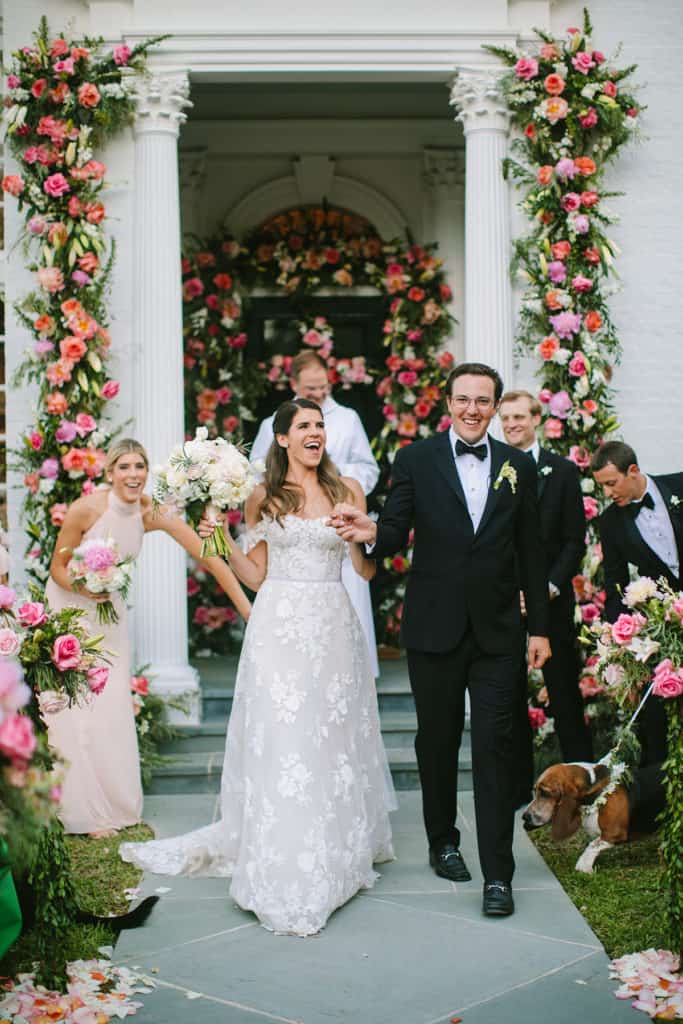 After three years of courtship, McColm surprised Blount with a lakeside proposal at The Fort Worth Boat Club at Eagle Mountain Lake. Immediately following the proposal, he coordinated a surprise engagement celebration with their friends and family who were waiting inside of the clubhouse to celebrate the couple’s happy union, followed by a private dinner at Joe T. Garcia’s. The rest, as they say, was history. After a fifteen-month engagement, the couple wed in San Antonio in the Spring of 2020.

The originally planned wedding at Saint Mark’s Episcopal Church and Argyle reception had to be cancelled due to COVID-19.  But then, just three weeks before the wedding date, the state started to open up, and a completely new wedding was quickly planned. The Blounts hosted their family and friends on the grounds of their Terrell Hills home for a much smaller, yet lively celebration that sent Macon and John off to their new lives together with the festive spirit that was authentically and distinctly San Antonio.

The wedding weekend began with an elegant rehearsal dinner graciously hosted by Eunice and Kelly McColm at Hotel Emma in the Elephant Cellar ballroom. The following day, one of Macon’s godmothers, Nita Kiolbassa, hosted the bridal party at her home for hair and make-up by Make-up Maven. Meanwhile an amazing team, including Laurie Ontjes of Illusions and Bill Haynie of JSAV,  were setting everything up at the Blount home. This included the bride’s father, Stephen Blount, who was  dubbed a real life version of George Banks from “Father of the Bride” getting the four participating dogs wedding-ready and preparing his famous margaritas for the reception! The wedding ceremony was officiated by Matt Wise of Saint Mark’s Episcopal Church in San Antonio and Andrew Thayer of Trinity Episcopal Church in New Orleans. Rev. Thayer was of special significance to the family because he renewed the bride’s parents 25th anniversary vows and married the brother and sister-in-law of the bride, who all now share a May 30th anniversary date with Macon and John McColm. Following the front yard ceremony was a romantic garden reception with dinner and dancing.

The event was coordinated by Robin Waters of Wedding Planners Inc. The floral designer, Danny Cuellar of Trinity Flowers, created a majestic floral cross that was placed on the front door which served as a gorgeous backdrop for the ceremony. This, along with exquisite cascading blooms of peonies in corals and shades of pink, roses in several colors and textures, and Casa Blanca lilies and eucalyptus, complimented the stately architecture of the home. After the ceremony, guests moved to the garden reception and were served a delicious dinner catered by Club Giraud. Everyone then enjoyed brandy freezes and wedding cakes for dessert. Special printed cloth cocktail napkins were designed by Betsy Mortimer of Bye George, who also created the fabulous wedding invitations. Performances by Mariachi Campanas de America of San Antonio and Drywater Band from Houston had the couple and their families and friends entertained and united in celebration all evening long.

Despite their inability to honeymoon in Turks and Caicos due to COVID-19, the newlyweds were able to get away to the Texas coast for a mini-moon in Port Aransas immediately after the wedding, and they plan to travel to their original destination when it is safe again to sojourn abroad. The bride is a graduate of University of Texas at Austin and works for SRS Real Estate Partners, and the groom is a graduate of Texas Tech University and co-owns ACF Tarp and Awning. The couple currently resides in Fort Worth.