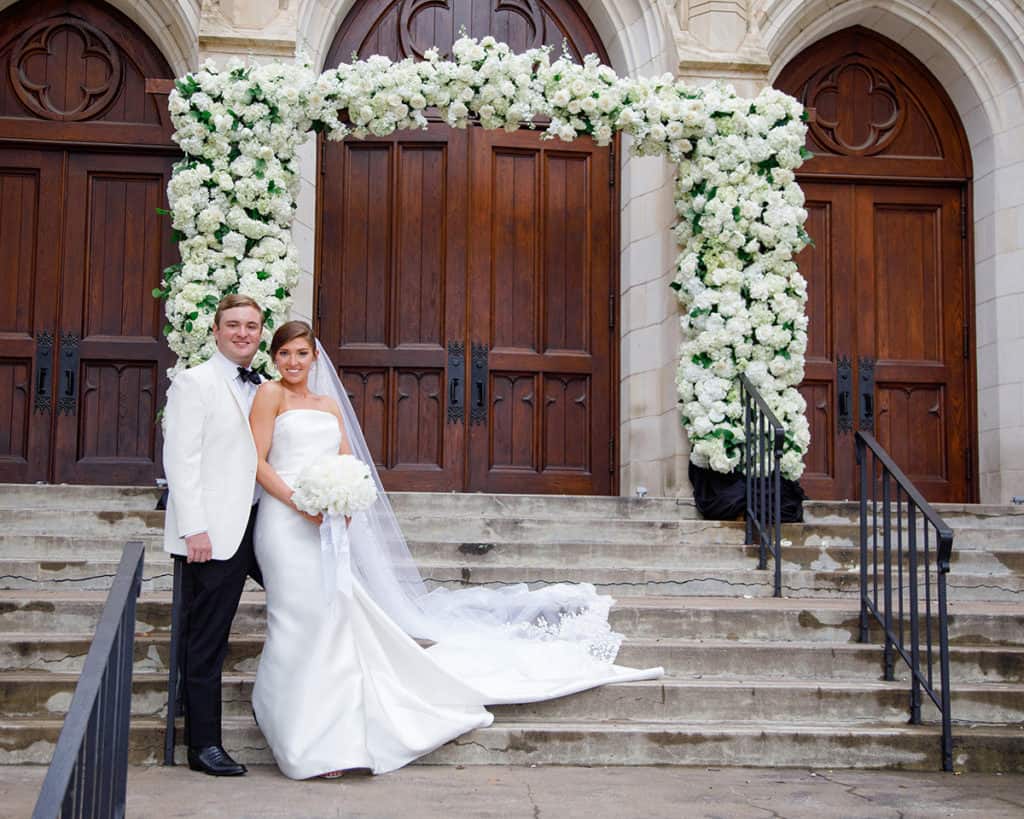 FROM THIS MOMENT ON

The Nuptials Of Jillian Fuhrmann and James Moon, Jr.

Jillian Joy Fuhrmann, the daughter of Joy and Triple Fuhrmann and James Graham Moon, Jr., the son of Lisa and Earl Keister, and James Graham Moon, Sr., were married in a ceremony in San Antonio surrounded by family and friends. Jillian, a native San Antonian, and James, a native of Knoxville, Tennessee, have known each other since they met while visiting Texas Christian University, where they both ended up attending. A friend of Jillian’s from Camp Waldemar introduced them, and they dated for six years before becoming engaged for a year. “We were in Port Aransas for Mother’s Day weekend in 2020,” shares Jillian Moon. “We had plans to meet up with our friends for drinks, and James took us on a detour on the golf cart to the Palmilla Golf Course, where he popped the question.”

The nuptials were at First Presbyterian Church, officiated by Rev. Bob Fuller and Rev. Michael Crocker. The bride wore a Rivini gown from Julian Gold Bridal, San Antonio. With a sophisticated fit and flare style, made of Neo Satin, it was  a modern, elegant trumpet silhouette. The unique oversized double-loop bow in the back finishes this stunning look flowing into a chapel length train. The mother of the bride’s dress was designed and created by Angelina Mata of San Antonio.

The wedding décor, centered around an elegant garden theme, was selected for the 600 guests. Sweet August Events, led by Katherine Lopez, planned the wedding festivities. The gorgeous floral design included primarily white hydrangeas, was specially chosen because they were reminiscent of the groom’s family roots on Nantucket Island. The hydrangeas were embellished with white roses, created and executed by Danny Cuellar and his team at Trinity Flowers.

The rehearsal dinner was held at the legendary San Antonio favorite, Casa Rio. The reception, a buffet affair, was at The Argyle. One of the groom’s favorite moments was the private sushi dinner the bride and groom enjoyed together during the cocktail hour before walking into the reception. This time together helped them savor the occasion before uniting with family and friends at the reception. Afterward, the bride’s father surprised the couple with their favorite Texas musician, Pat Green, to play the first dance, as well as some of the bride and groom’s families’ favorite songs to kick off the reception. Then, the Georgia Bridgewater Orchestra performed.

The couple honeymooned in Mayakoba and Tulum, Mexico, and make  their home in San Antonio, where the groom is employed by Merrill Lynch. In their spare time, they love to cook, try new restaurants, travel, and enjoy their golden retriever, Luna.