FOREVER AND A DAY

Elizabeth Adams, the daughter of Ann and Frank Adams and Edward “Chap” Bernet, the son of Clemmie and Brant Bernet, both of Dallas, suspected they might have a future together way back at Highland Park Middle School. Elizabeth remembered Chap as the funny tall kid in the D.A.R.E. skits and Chap remembered Elizabeth as the tall girl surrounded by friends while walking the track.

The flame ignited in high school and heated up through college (she graduated from the University of Texas and he graduated from Texas Tech University) until the couple became engaged in Boston in 2018. That’s when Chap took Elizabeth on a train to a small beach for the day on their anniversary. A Nor’easter had just passed through, so it was chilly and the waves were massive, according to the couple. Everyone in the sleepy, quaint town was out watching the waves, so privacy was scarce. Chap led Elizabeth on several walks to locate the perfect spot and finally found it by the harbor. Words, laughs and tears were shared until Chap bent down on one knee, and the bride-to-be said yes.

Both loving Mexico, the couple were married in San Miguel de Allende. The festivities kicked off with the rehearsal dinner at Casa San Panco and the Rosewood San Miguel de Allende served as the venue for the wedding ceremony and reception. “The décor, created by Macadamia Flores, was comprised of seasonal flowers from the Guanajuato region that matched the colorful streets of the quaint Mexican city; pinks, reds, yellows and pops of greenery,” shared Elizabeth Adams Bernet. “Guests walked through the Rosewood Lavender Garden upon arrival, where the Jacaranda trees bloomed in vibrant purple and Pampas grass framed the ceremony site.” Brian Worley Productions and Suzanne Reinhard Events teamed to produce the nuptial gathering weekend.

The bride walked down the aisle wearing a Spanish lace, strapless gown by Monique Lhuillier. Her earrings were from her late grandmother, a pearl ring was borrowed from her other grandmother, and lace was sewn into the hem of her dress that came from the wedding gown of the groom’s grandmother. Elizabeth borrowed her veil from her older sister, Stacy Hicks and the blue sapphire fashioned to her bouquet was her father’s first wedding anniversary gift to her mother. When Chap first saw Elizabeth, he started sobbing. Then, she tripped slightly and began laughing with her father, who escorted her, which caused Chap’s tears to turn into the biggest smile, according to the bride. The groom wore a custom Knot Standard white dinner jacket and custom navy tuxedo pants and sported a set of his great grandfather’s cufflinks that he borrowed from his father. 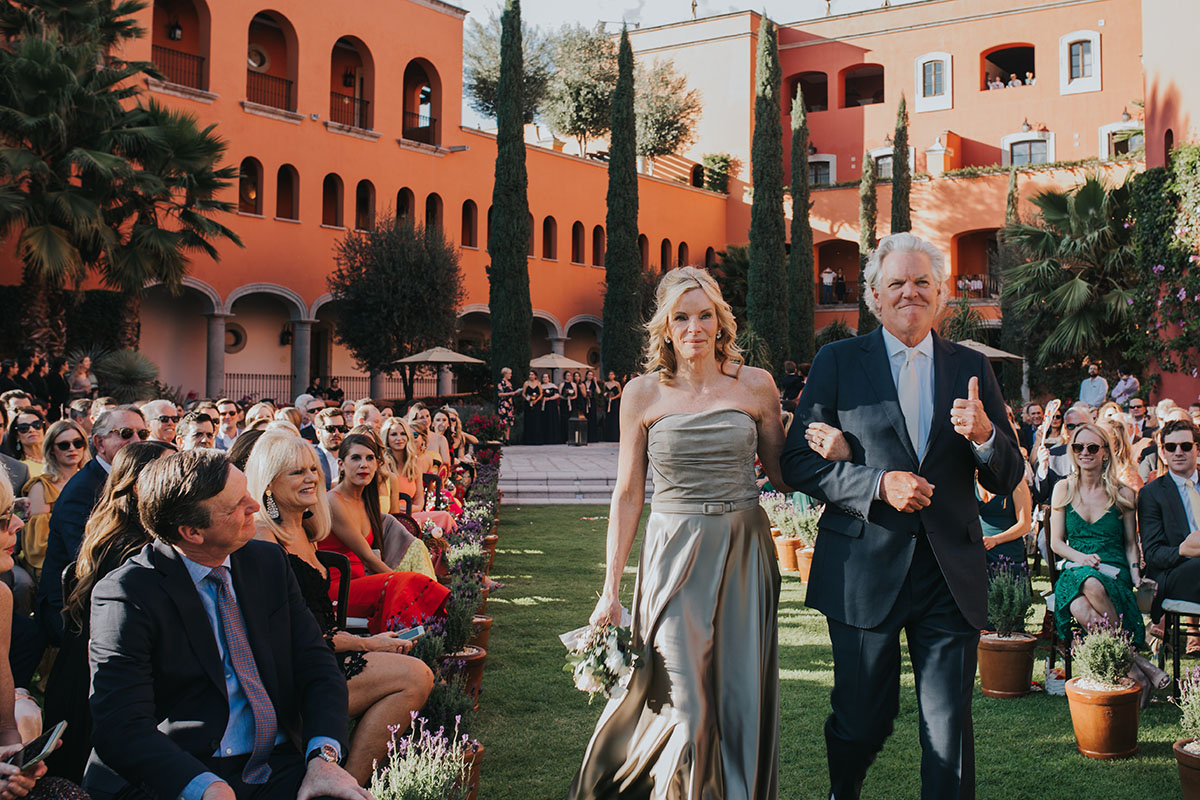 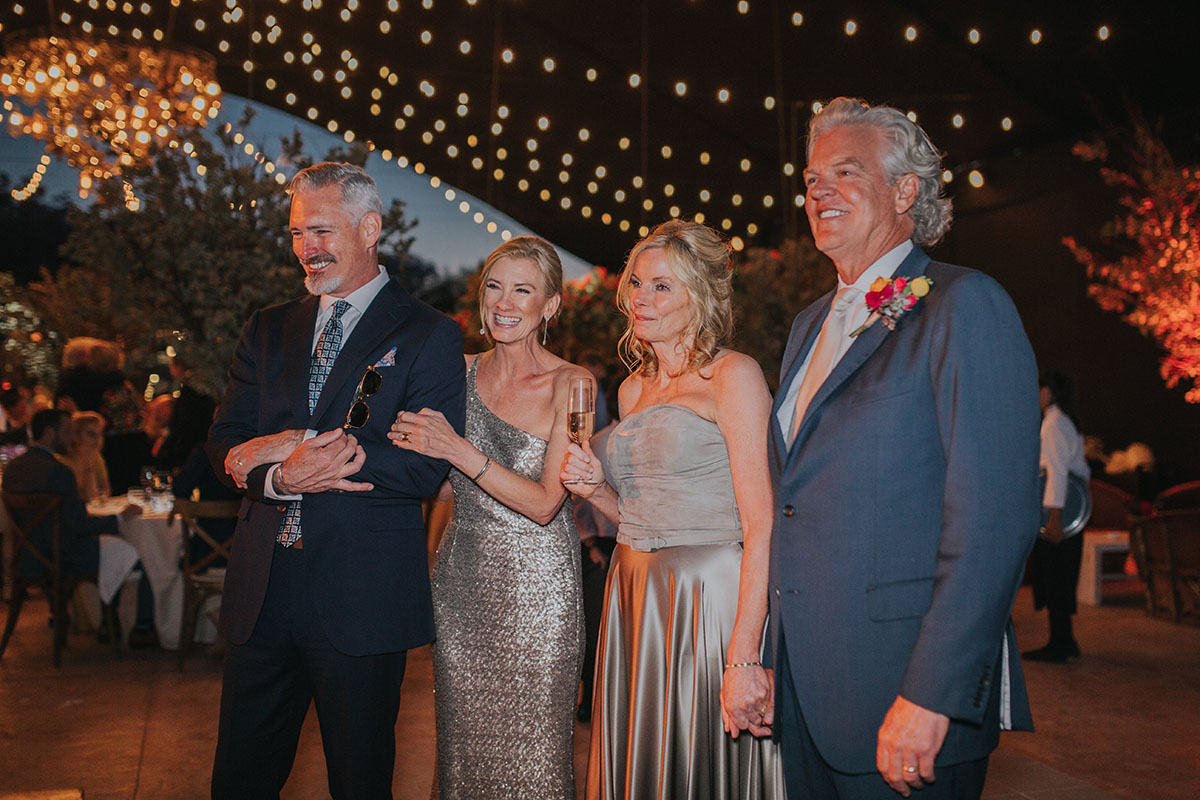 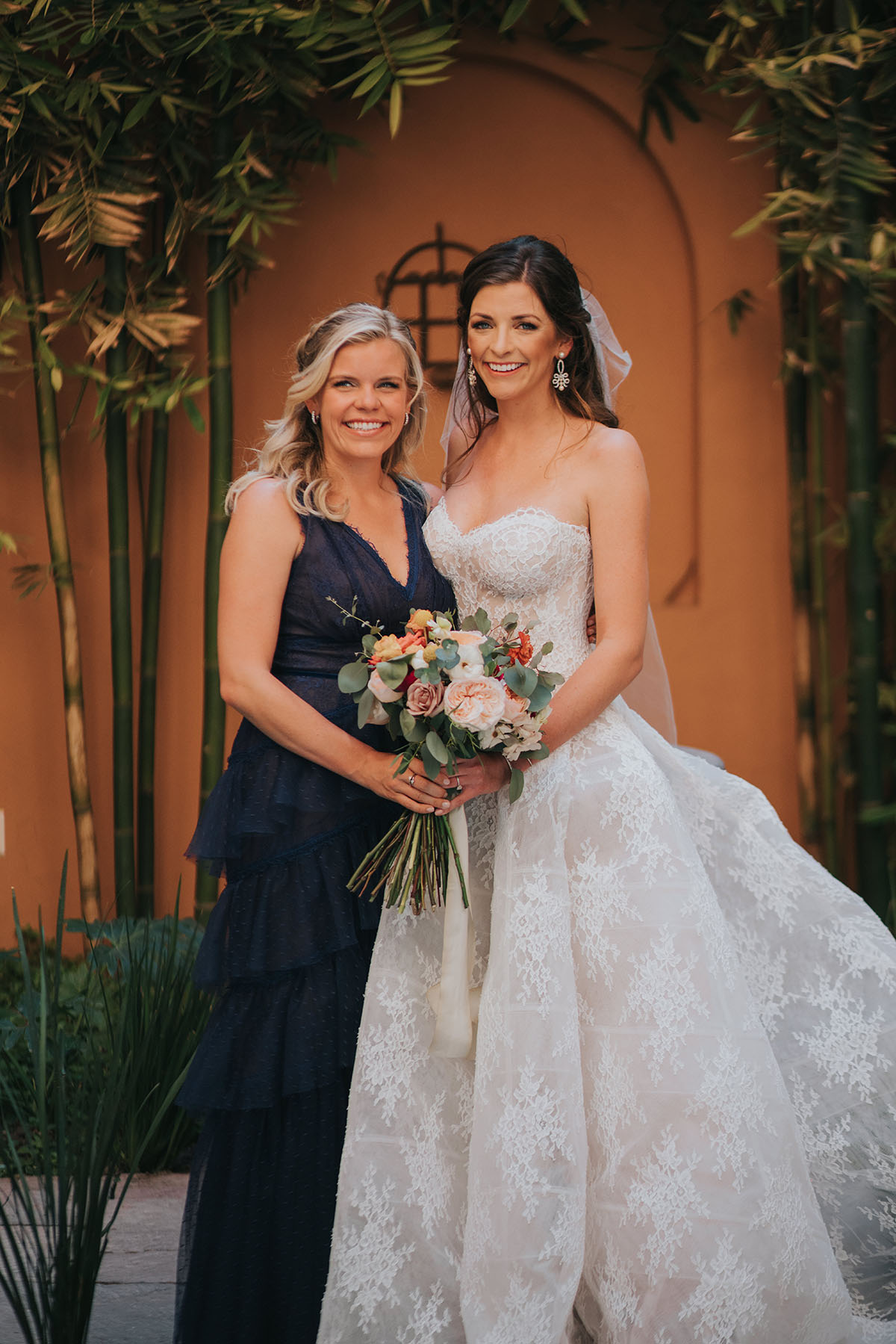 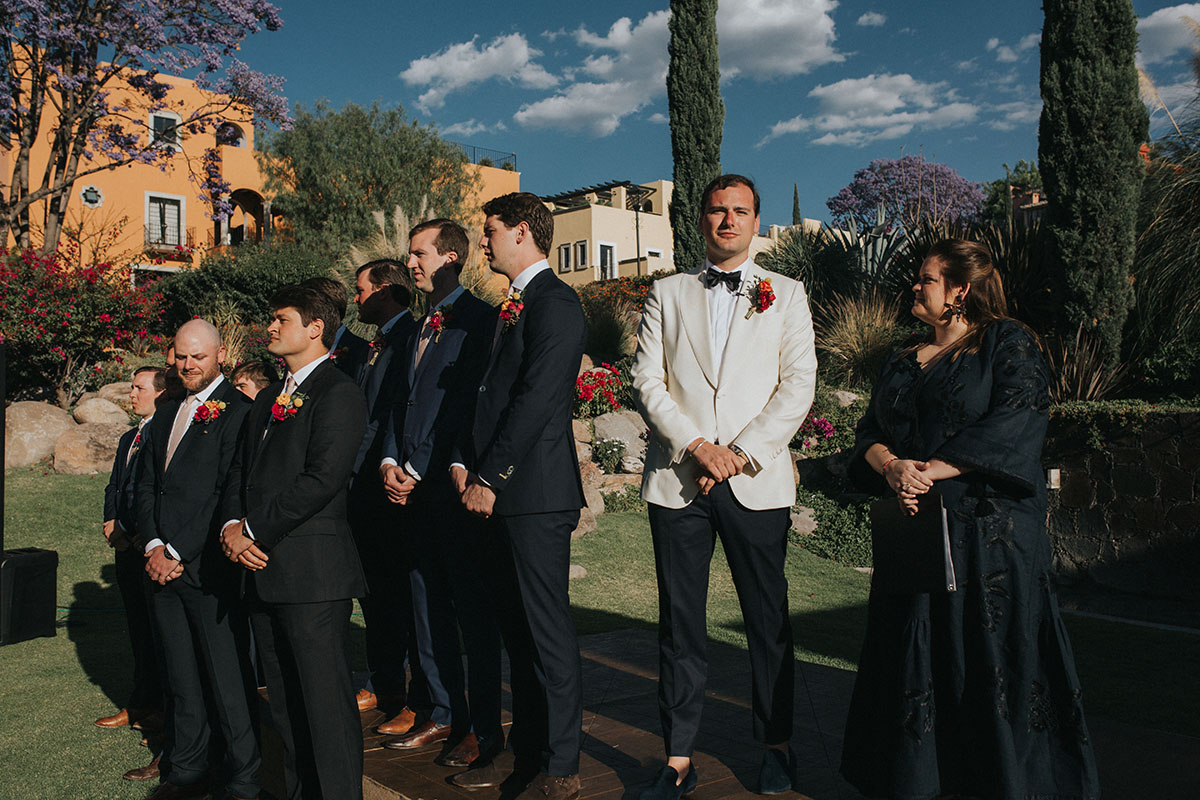 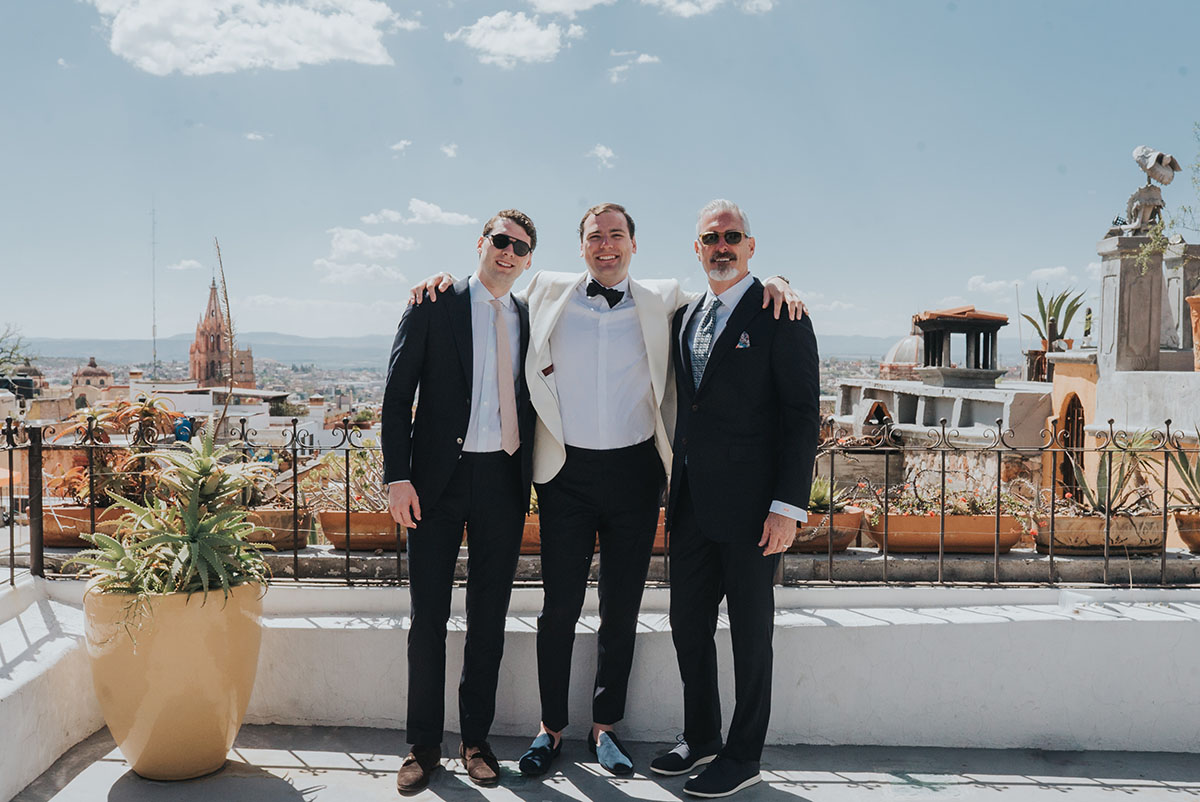 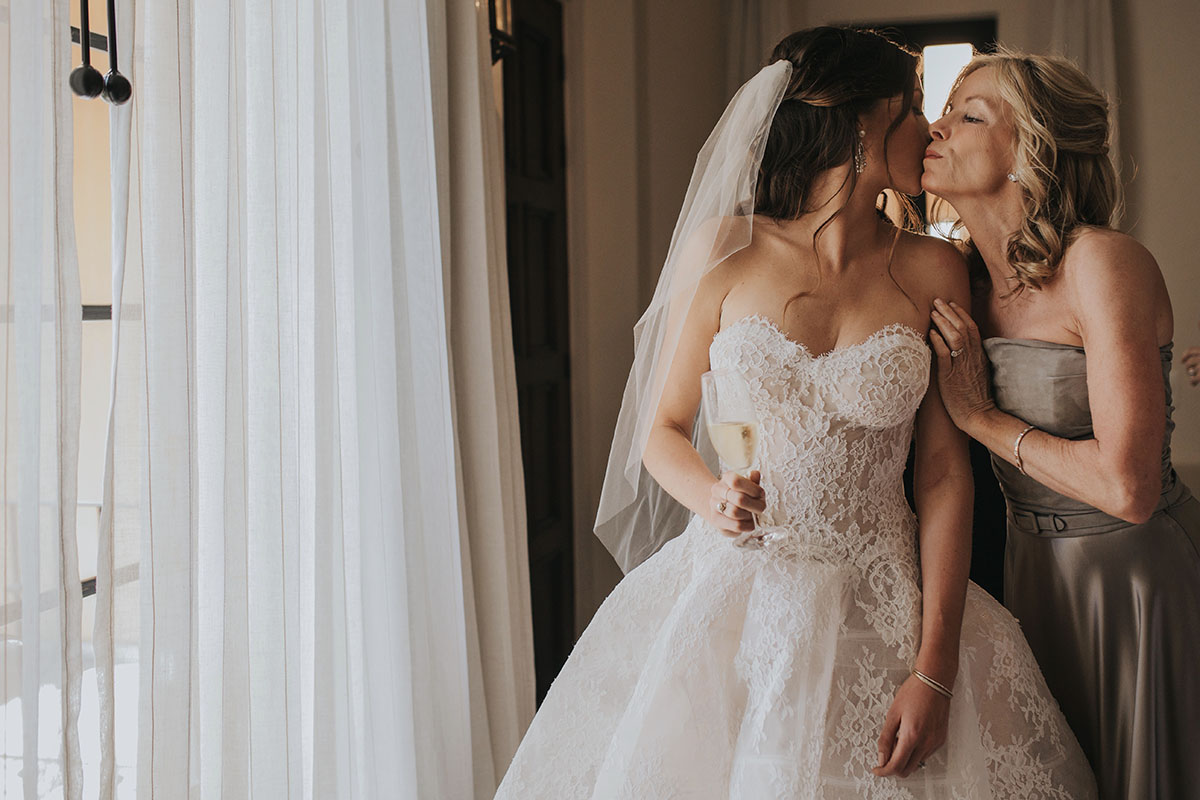 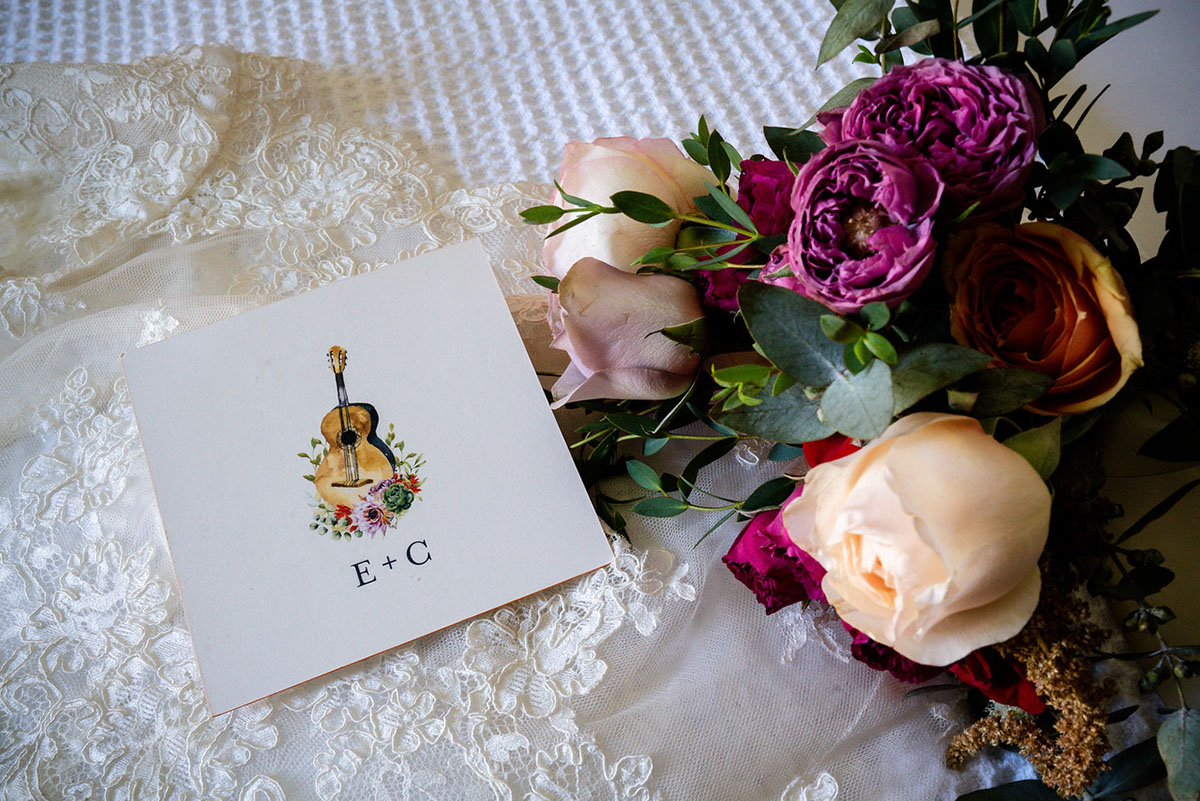 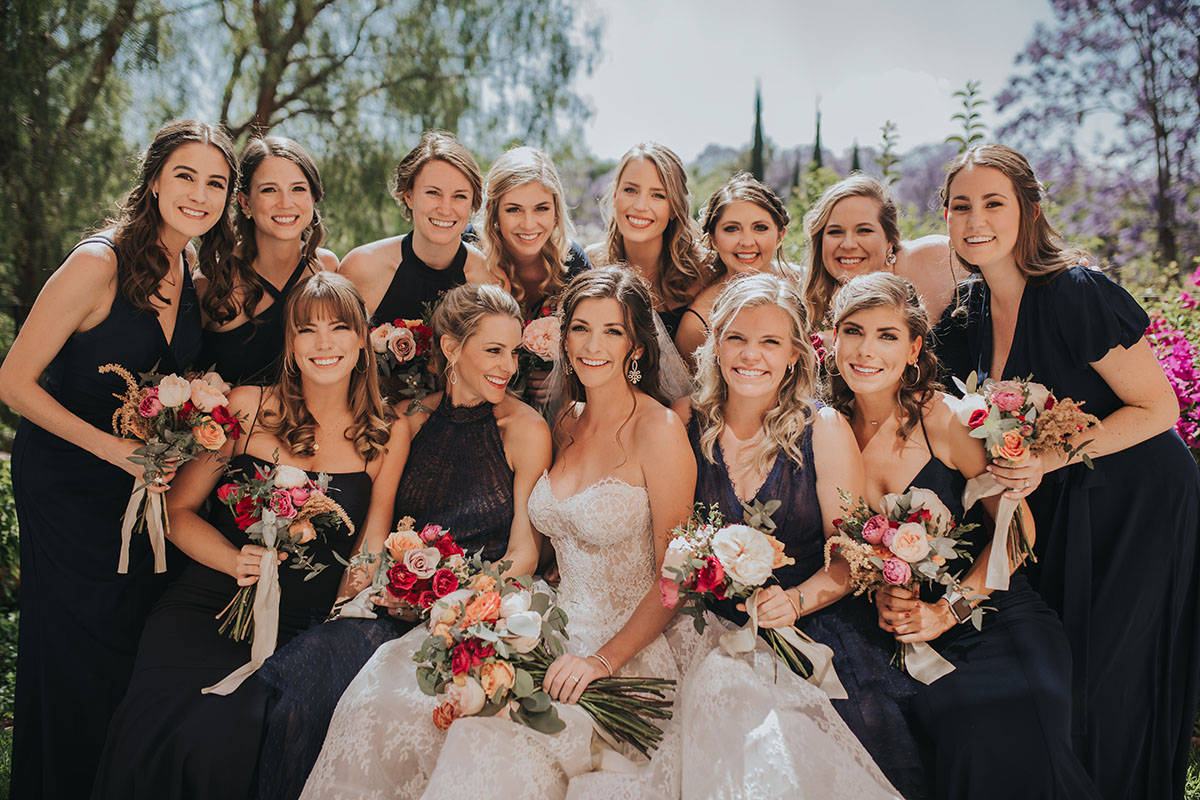 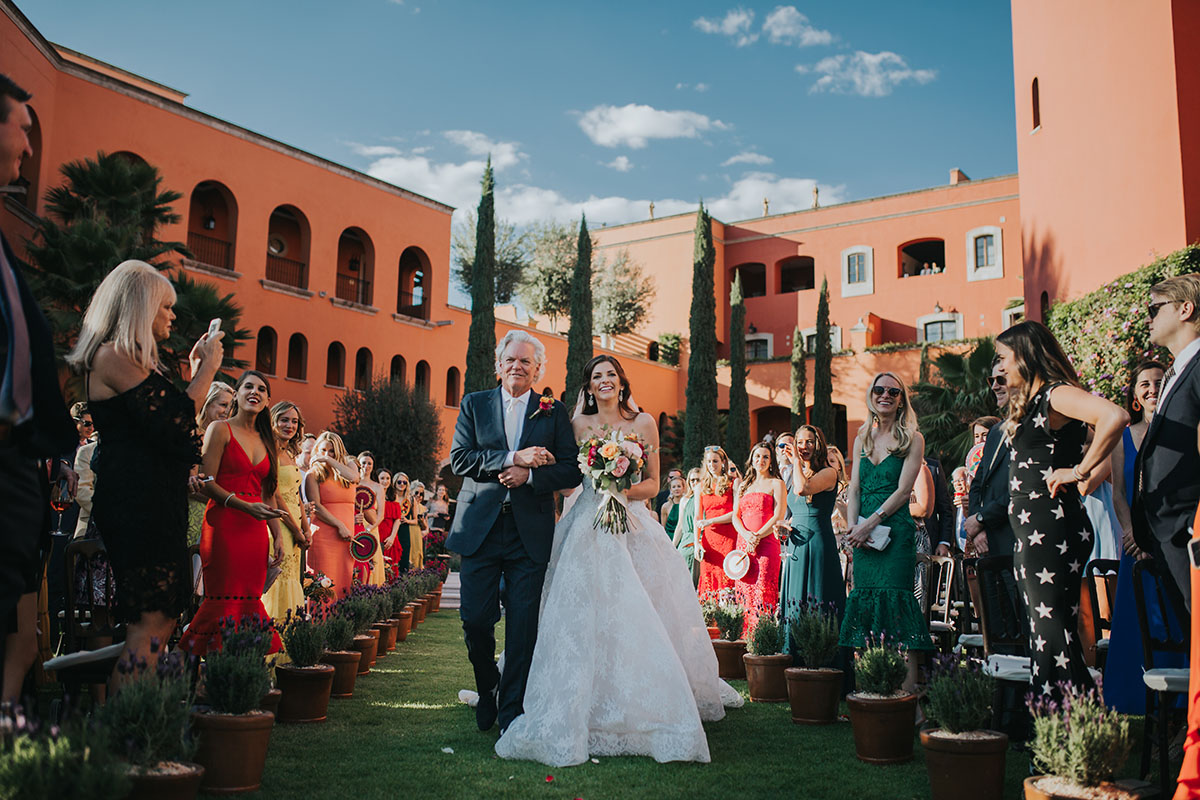 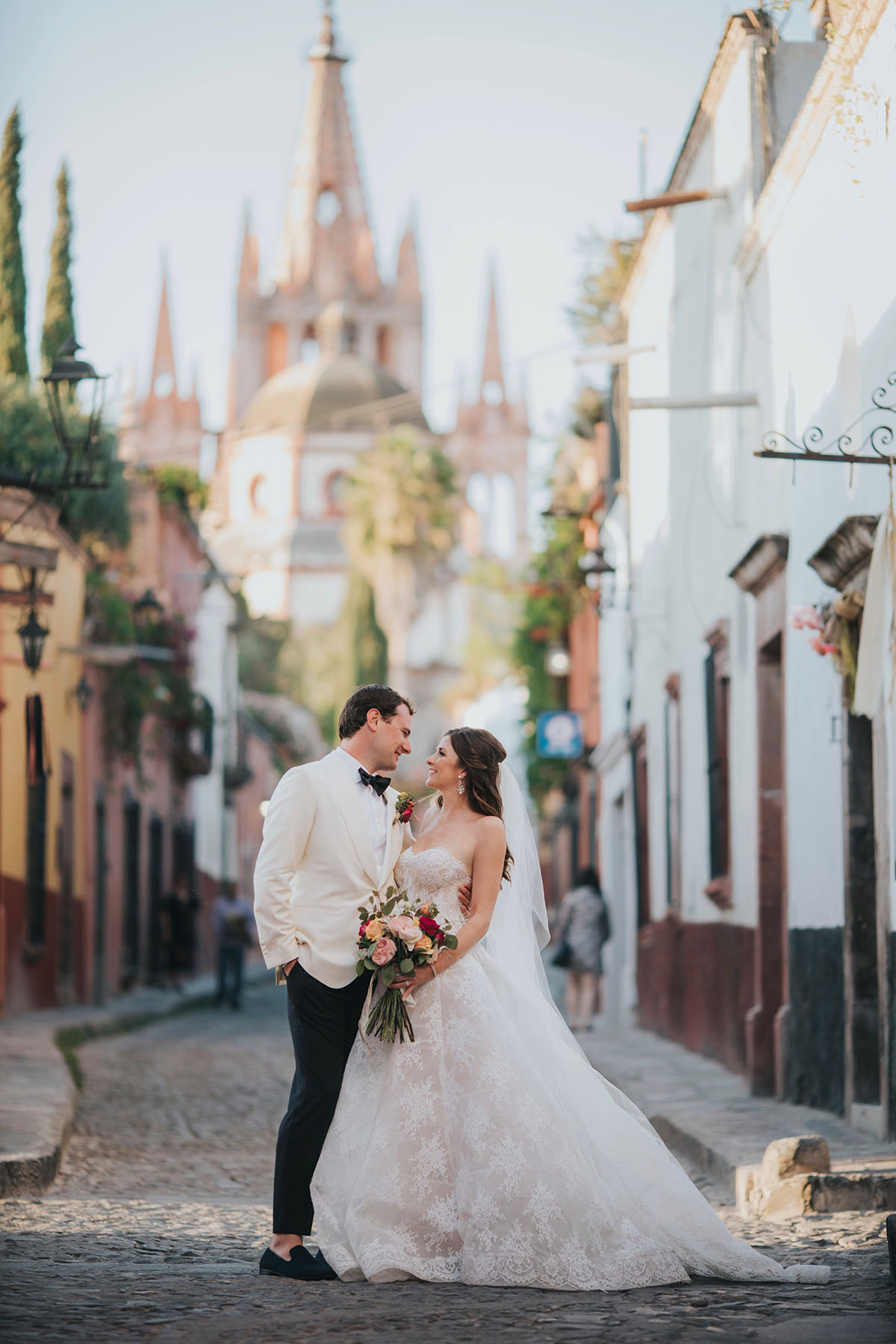 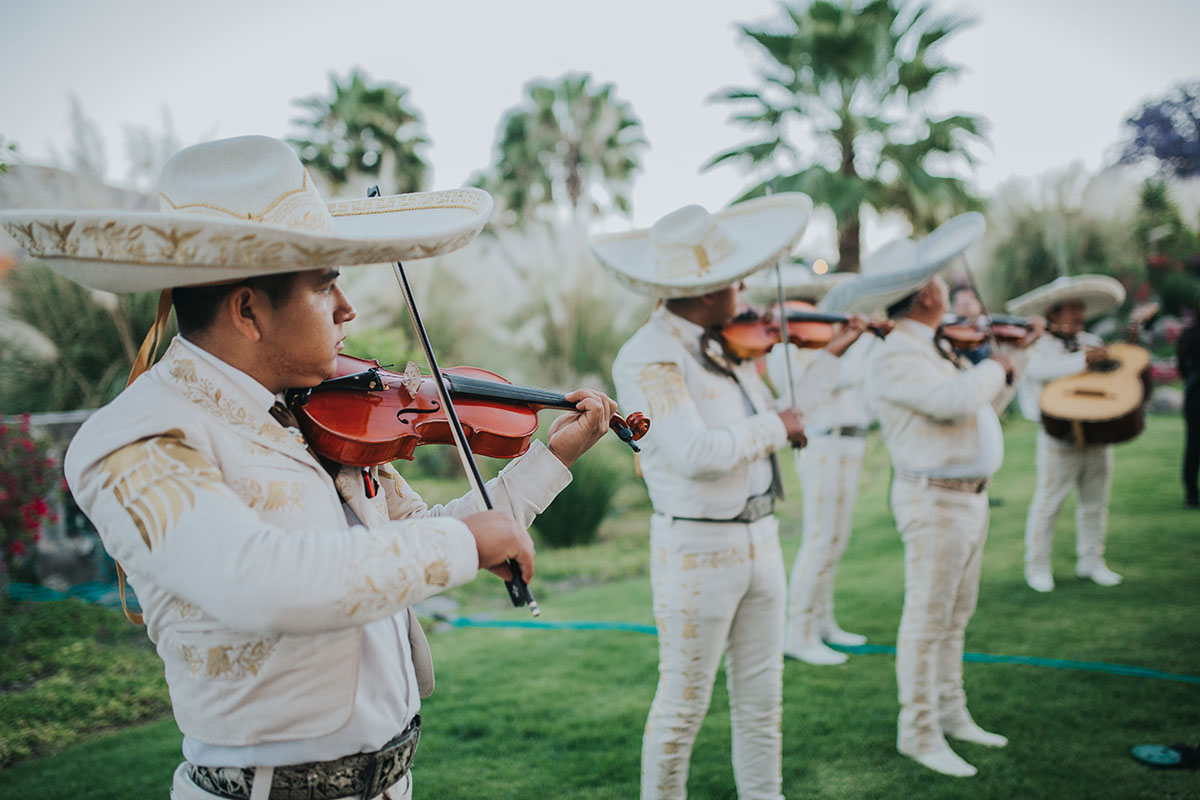 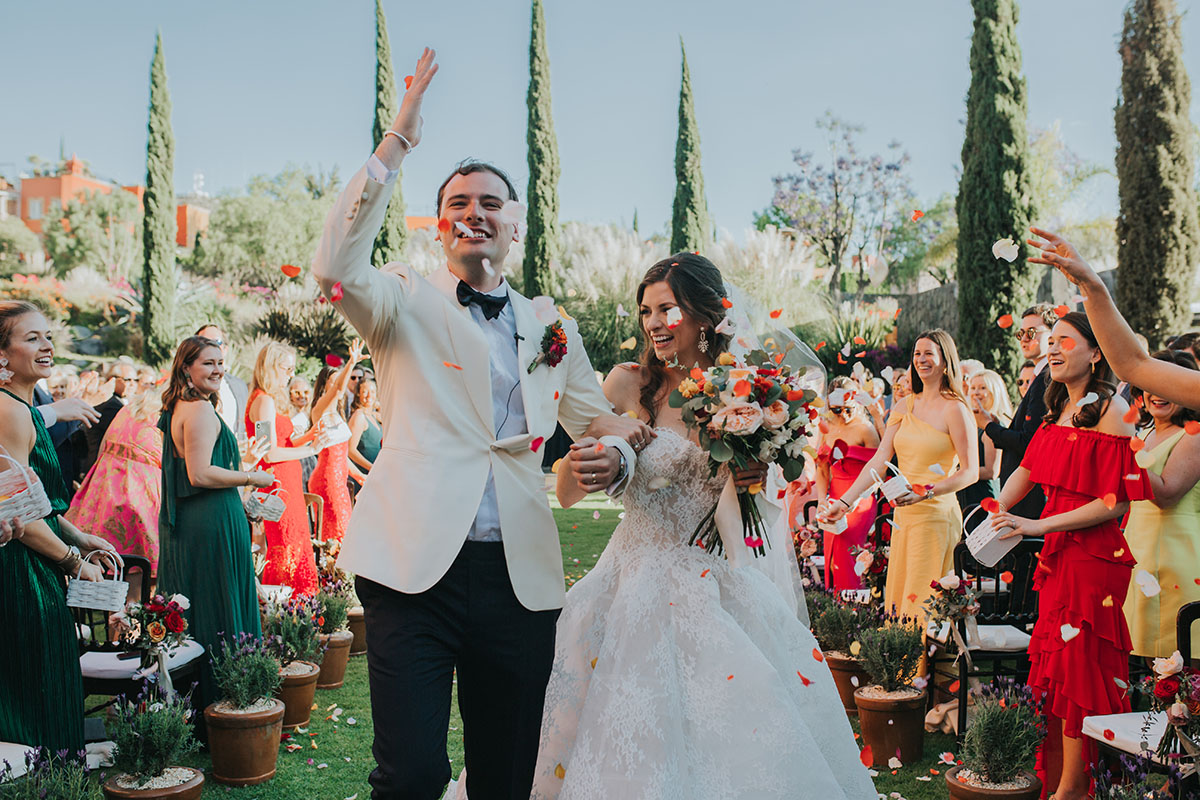 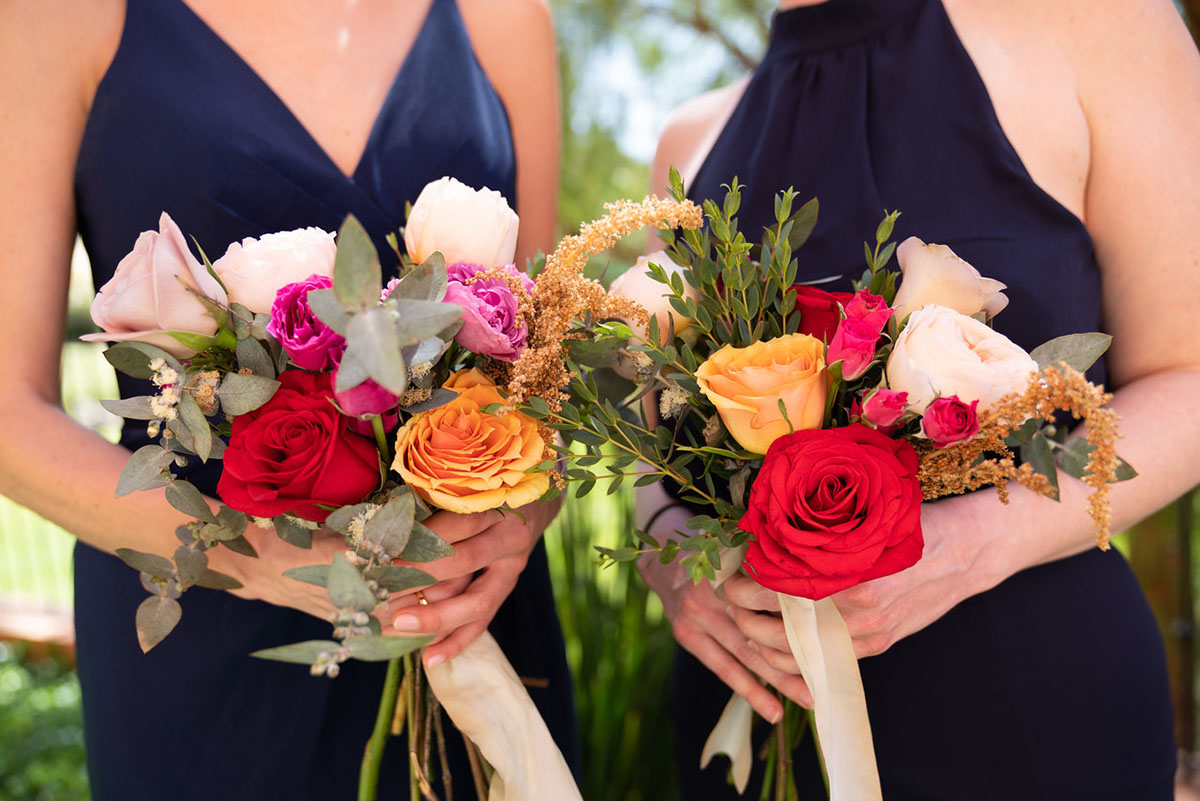 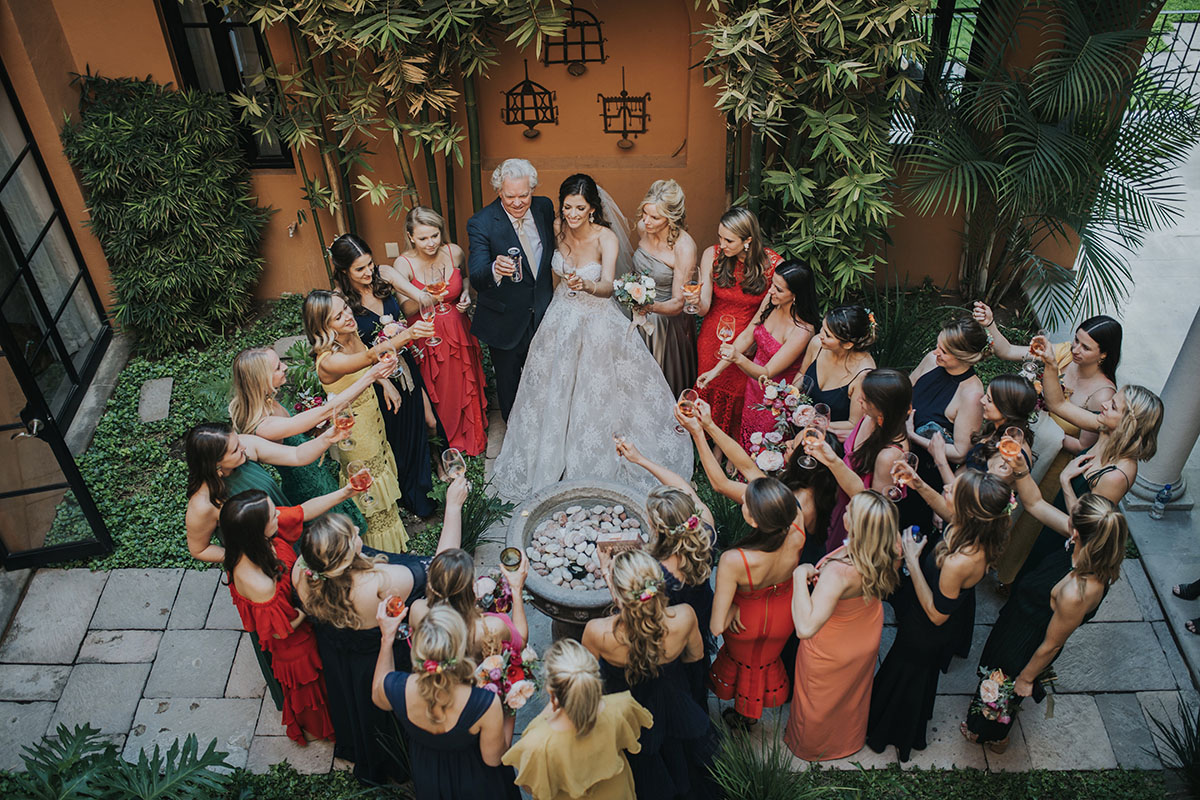 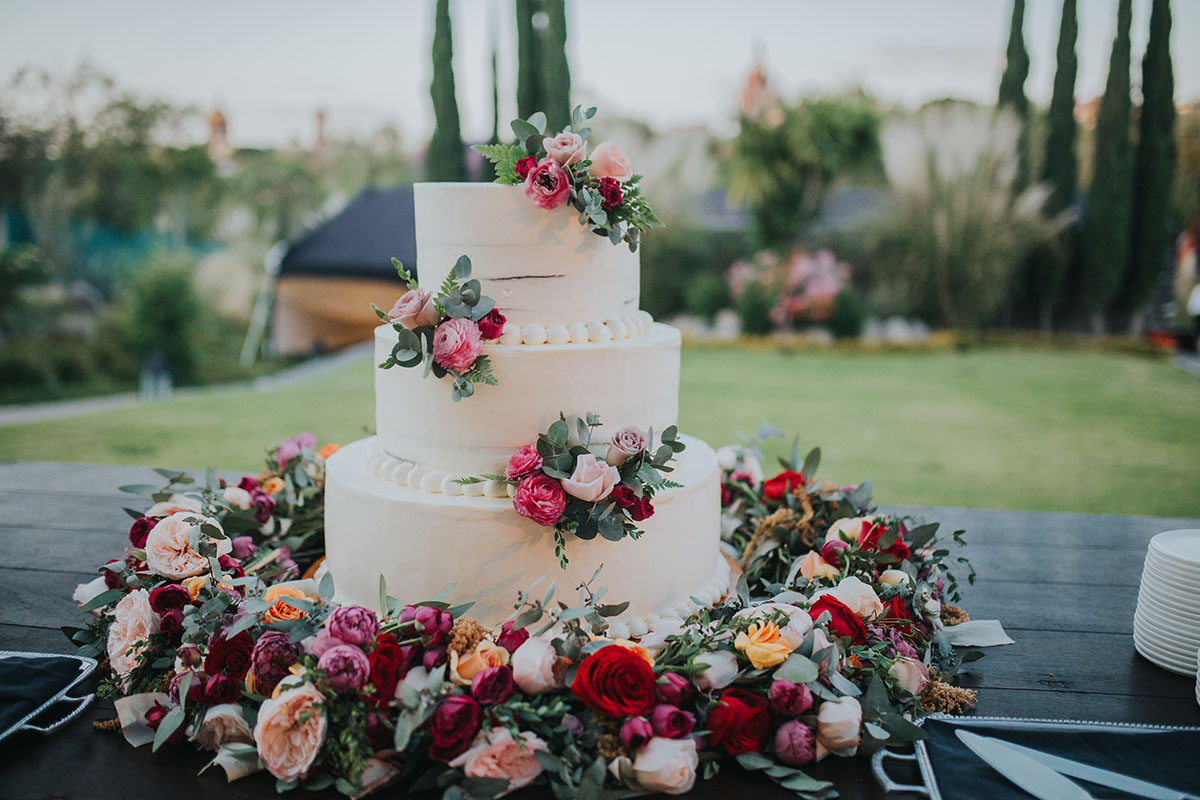 A dear friend of the couple’s, Elly Hutchings, officiated the wedding and was chosen for her close relationship with Elizabeth and Chap. Commented the couple, “Her way with words always speaks to her positive, contagious spirit.” Elizabeth’s cousins played the processional music at the ceremony where the couple was surrounded by their attendants. The bride’s sisters attended her with Stacy Hicks as matron of honor and Caroline Adams as her maid of honor. The 10 bridesmaids were: Daisy Bernet, Elizabeth Bernet, Phoebe Bernet, Georgie Ferrell, Erica Hubble, Francis Nolan, Ellie O’Neil, Melanie Proctor, Mary Margaret Shamburger, and Laura Wright. The groom’s best man was Charlie Bernet and serving as his 10 groomsmen were: Matt Bonano, Chris Calandro, Dodge Carter, Mack Hicks, Steve Lander, Billy Langhenry,  Edward Neblett, Madison Oden, Tyler Riek, and Ben Stevens. Elizabeth asked her house party to wear bright colors and sit on the aisles so she could see their faces on the way in and out, and they also threw colorful flower petals during the mariachi recessional.

After the ceremony, the venue for the reception had a fantastic view of the Parroquia parish church that was ensconced with ambient and chandelier lighting that created the perfect ambiance for guests dancing under the stars. A buffet and seated supper included guacamole, ceviche and carving stations. As the reception progressed, the first 10 songs (including the first dance) were played by Chap’s family; his grandfather, uncle, father and sister until Elizabeth & Chap joined the band for the last two songs. In fact, Chap performed a song that he had especially written for Elizabeth.

Then, the two DJs took over and as the night progressed, guests swapped their heels for Crocs, colorful ties were passed out for guests to tie around their heads and the DJs drew war paint markings in  pink, red and yellow paint on all of the guests. It was the perfect night. “The Rosewood was beautiful and Elizabeth was the most gorgeous bride anyone had ever seen,” shared the groom. The Rosewood also designed and created the multi-tiered cake that was adorned with fresh flowers and the house party laid their bouquets around it.

The happy couple spent their honeymoon on the Taha’a island in French Polynesia. They make their home in Nashville where the bride works in digital marketing at Suretone Entertainment and the groom is in corporate entertainment booking at the APA Agency. San Miguel will always hold a special place in their hearts and they plan to return often. 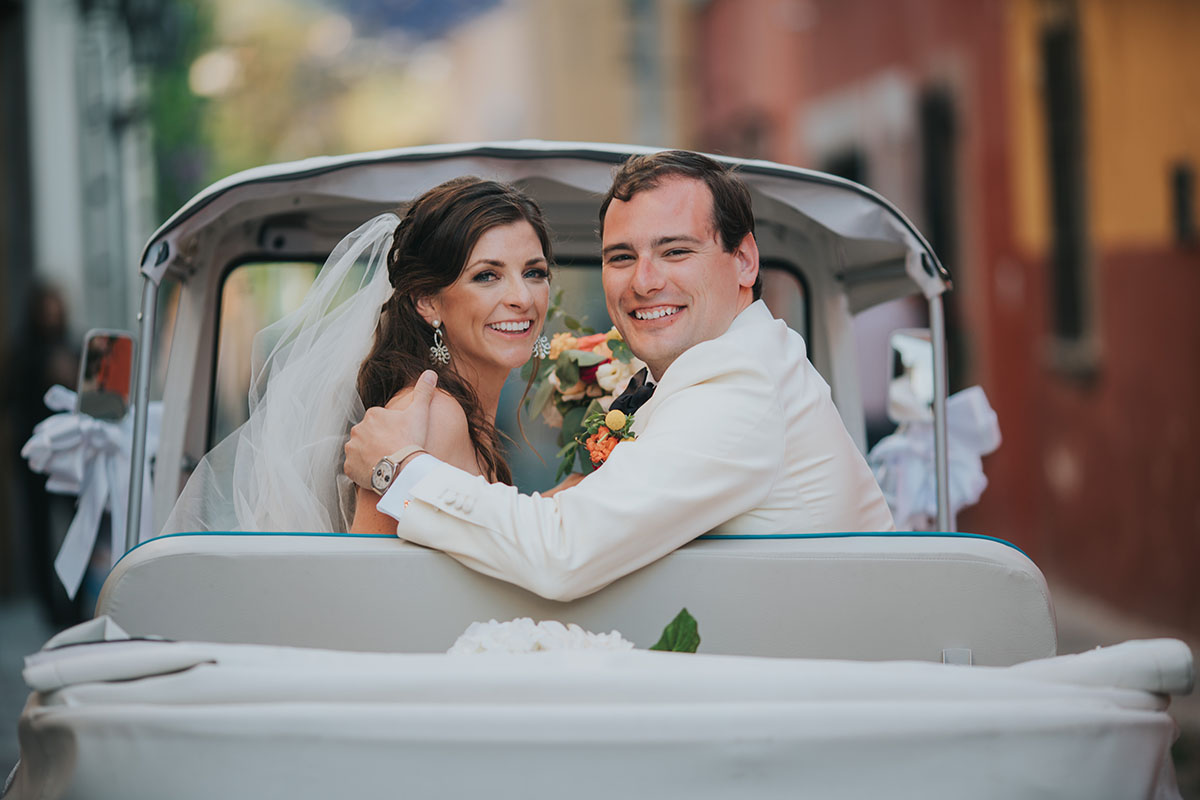 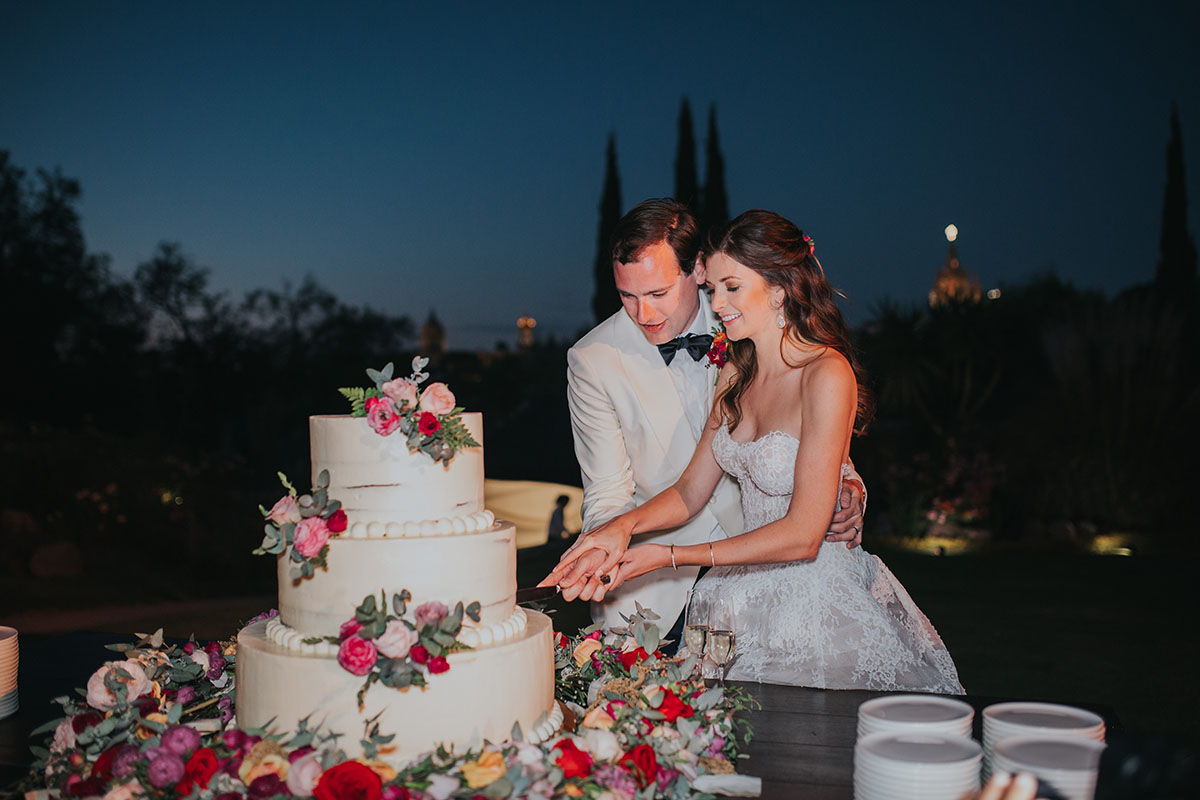 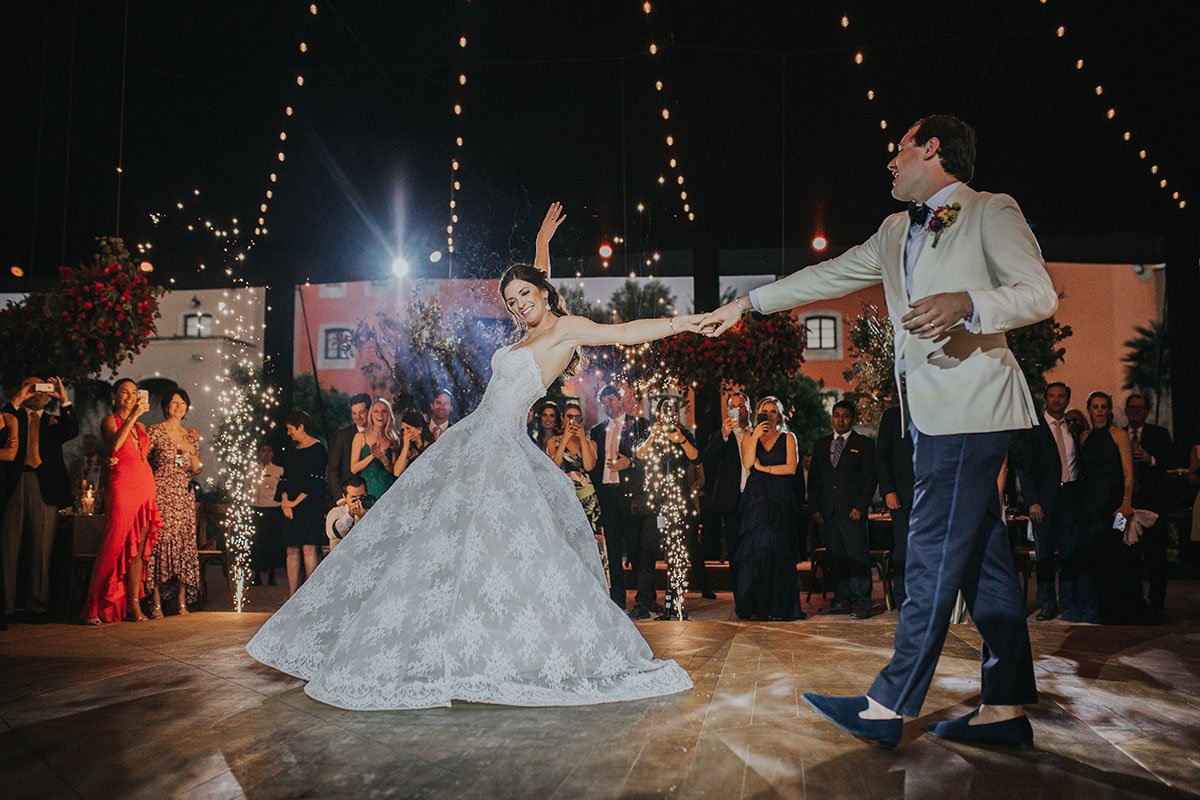 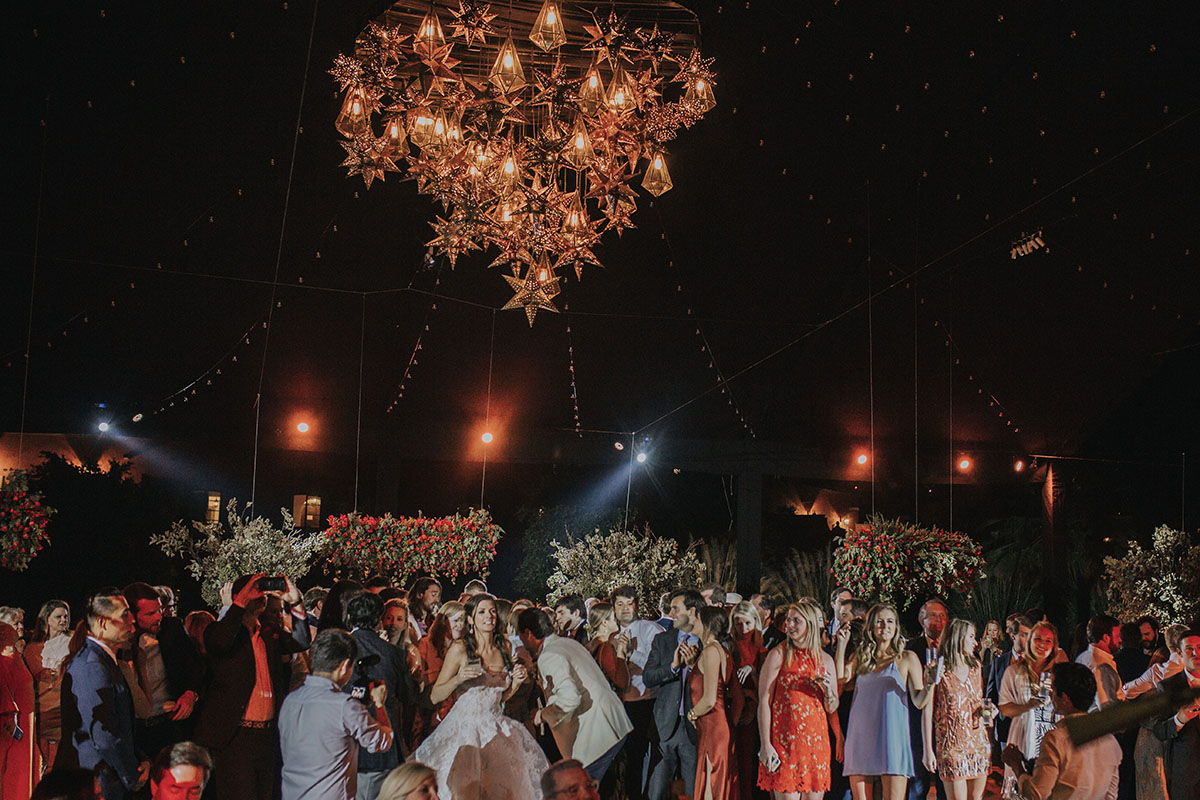 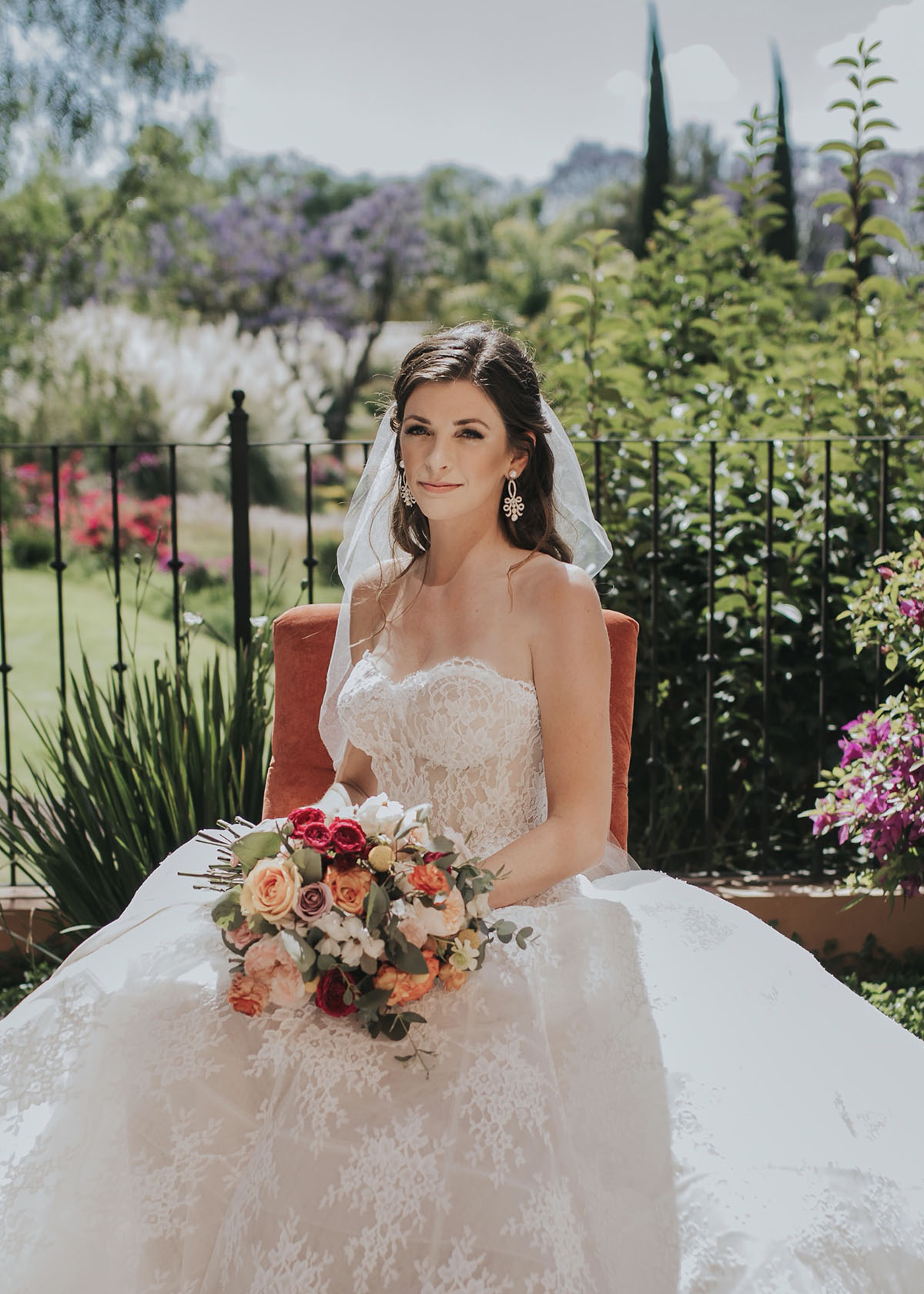 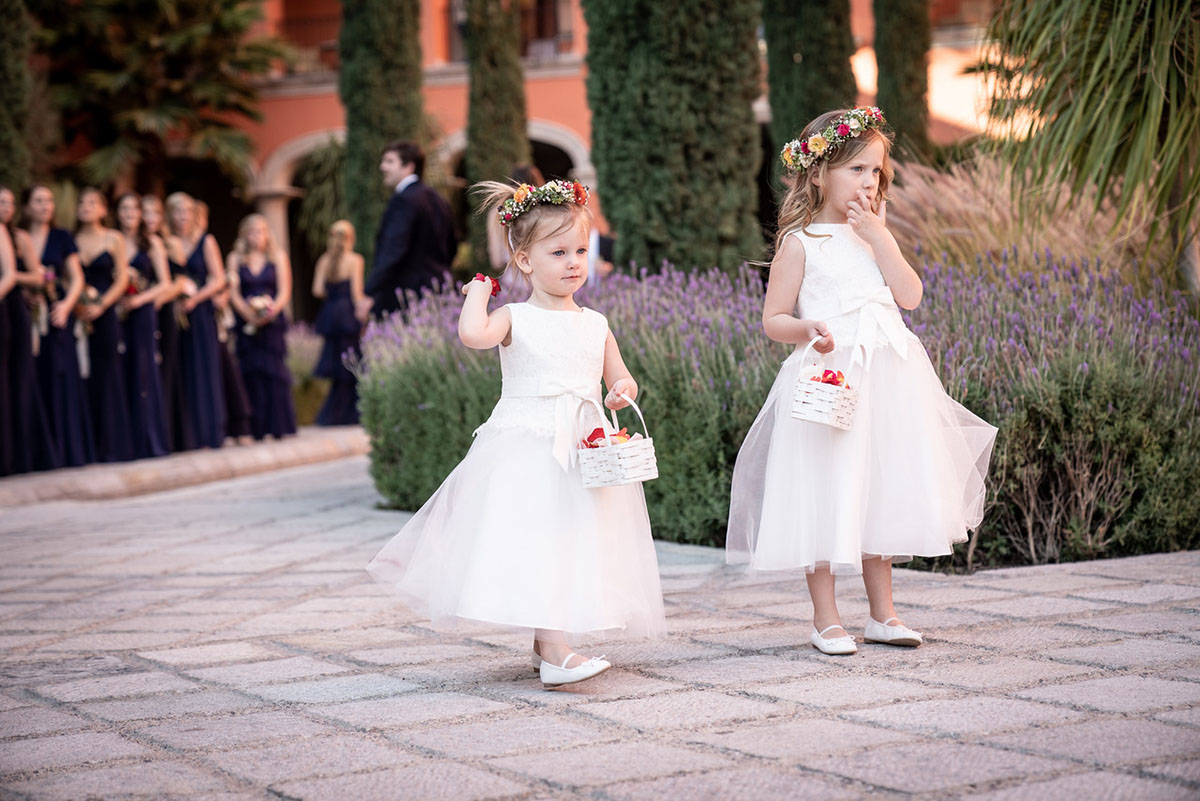 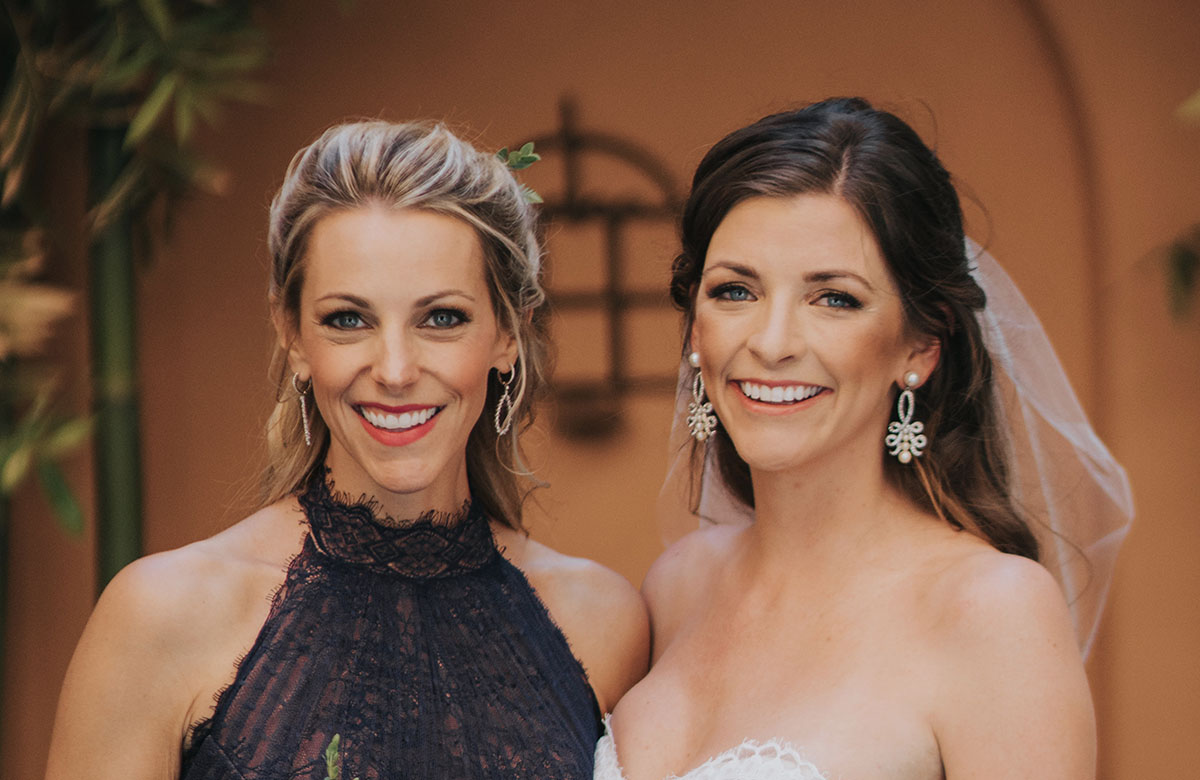 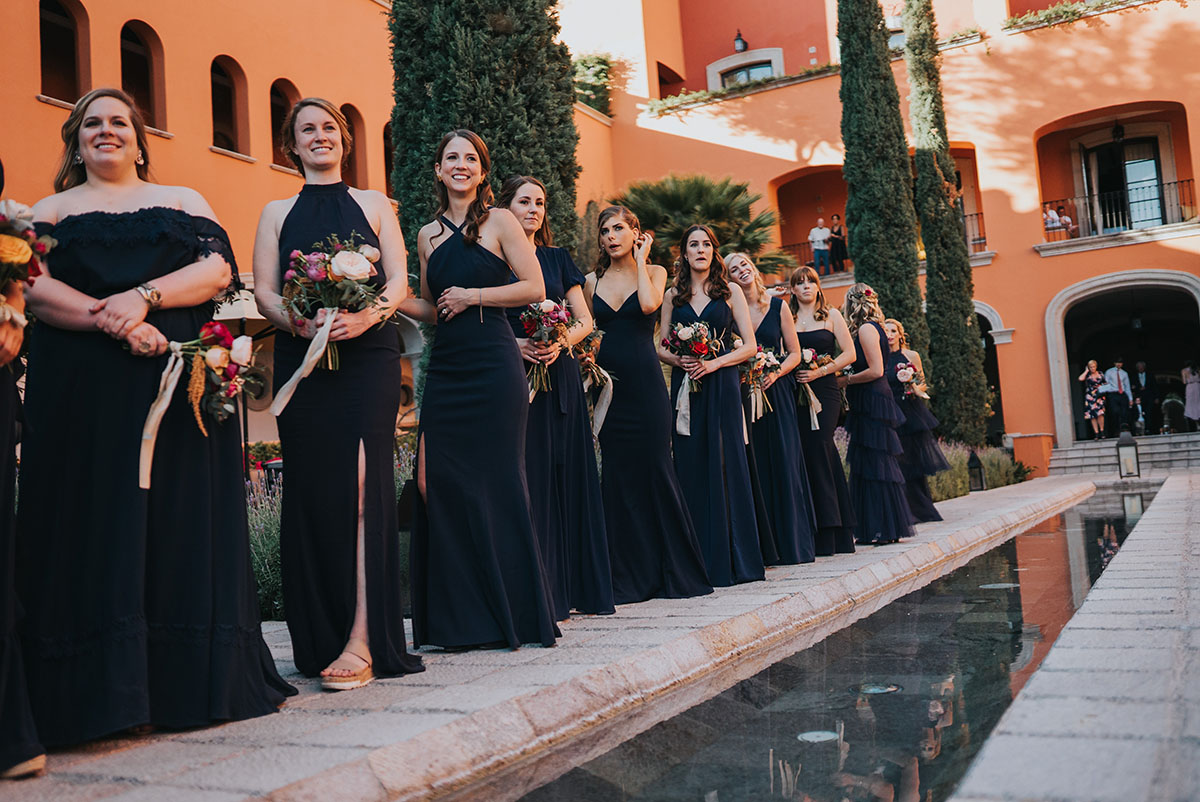 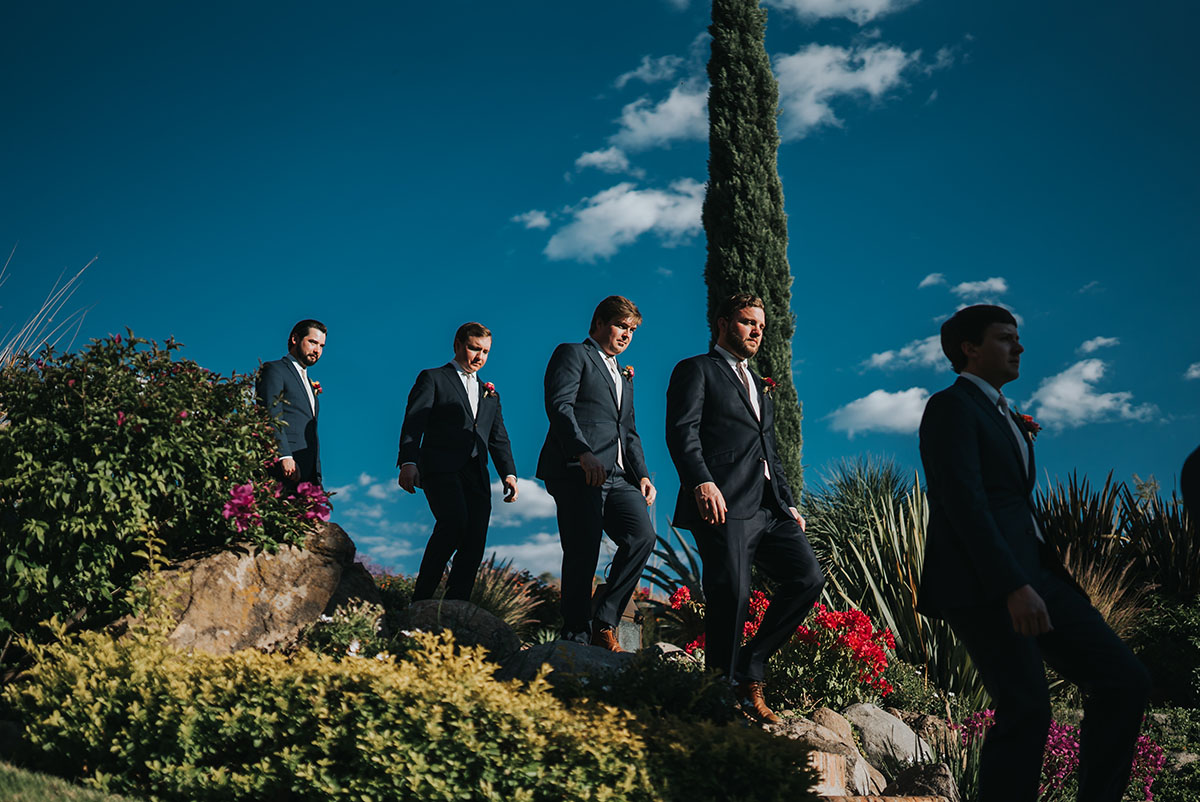 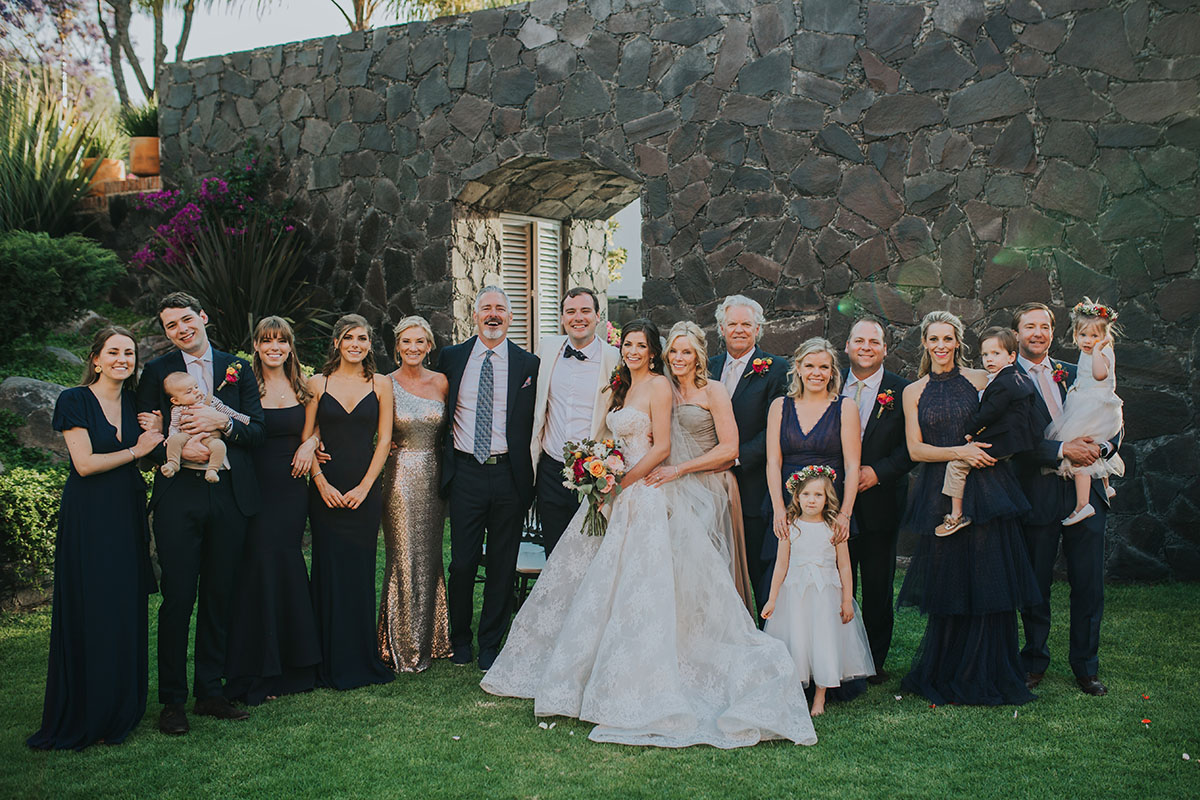