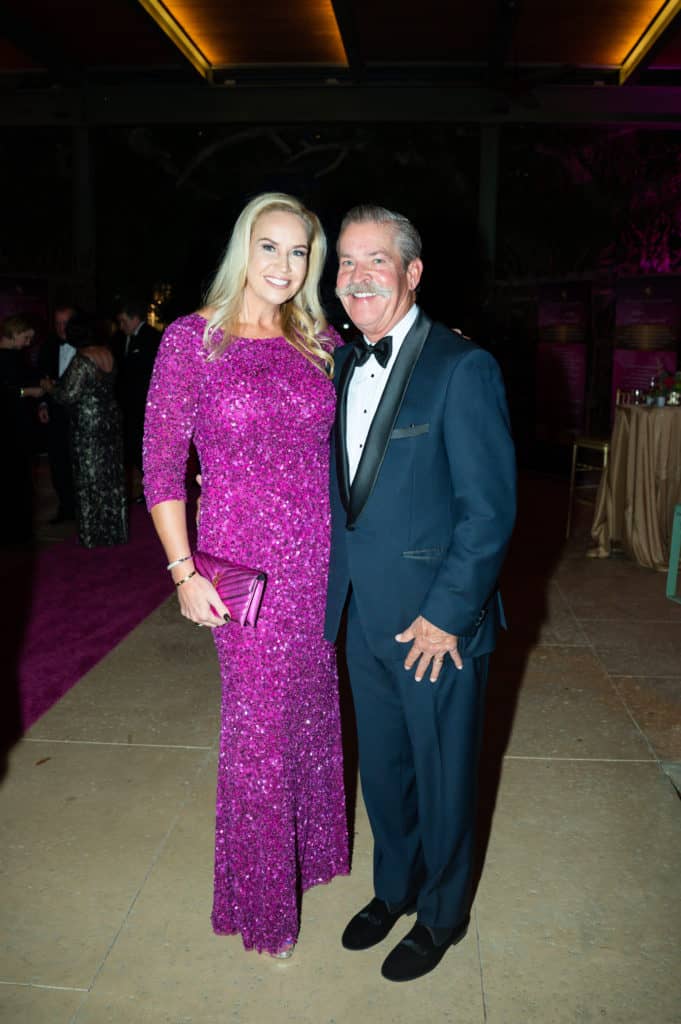 THE SETTING: The Charity Ball Association (CBA) of San Antonio’s 66th Chrysanthemum Ball was held at the Witte Museum’s Mays Family Center, with a record-breaking $1 million of funds raised by the almost 600 supporters in attendance. With pandemic protocol in place, the black-tie clad and elegantly attired guests, arrived on a 100-foot-long red carpet through a floral fantasy arch. They were then ushered into the Zachery Garden for a cocktail reception while the talented Youth Orchestra, San Antonio (YOSA), played in the background.

THE STYLE: Guests entered The Mays Family Center, greeted by a 15-foot-tall ice sculpture, in the shape of a birdcage, by award-winning Buddy Rasmussen. It mimicked the invitation design created by Elizabeth Roberts and was framed with floral details and jeweled butterflies, which encircled the base of the sculpture with magenta lighting highlighting the etched ice. Magenta, which represents universal harmony and emotional balance, was selected as the evening’s primary color palette by CBA President Terrie Musselman and Décor Chair Gayle Embrey. Complementing magenta were additional shades of lavender, green and white represented in the floral arrangements, along with jeweled butterflies that dotted the room.

The dinner began with entertainment by a dance orchestra. This year’s program was emceed by Albert Steves, assisted by his wife and sponsor member, Tricia Steves, with Carrie Catalani orchestrating an elaborate and exciting presentation of Prizes & Prize drawings. As the night progressed, guests savored decadent hors d’oeuvres, all by Rosemary’s Catering. Wine pairings were an elegant and perfect accompaniment to the gourmet meal. The evening was capped off by entertainment by the band, Blind Date of Austin.

THE PURPOSE: The special, unique, and memorable night was helmed by CBS Chairman of the Board Lynn Ziegler, President Terrie Musselman, and the many committees that orchestrated the festivities. The 2020 and 2021 combined gala Diamond Chrysanthemum Patrons were the Betty Stieren Kelso Foundation, Charity Ball Legacy Foundation, Kittie Nelson Ferguson Foundation, and the Mays Family Foundation. Even with the unusual year in 2020, the Charity Ball raised over one million dollars under the chairmanship of the 2020 Vice President for Patrons, Kelly Kennedy, and then again raised over one million dollars in 2021 under the Vice President for Patrons, Ellen O’Gorman.

The organization is so very grateful for The Charity Ball Legacy Foundation, which made a significant contribution of $125,000 in 2020 and an increased donation in 2021 of $180,000 to The Charity Ball Association. During these past two years, under the guidance of Sharon Seal, Vice President of Charities, a rigorous process was developed to determine the 36 charities to be funded in Bexar County. As a result, many needs were met for these children, such as food, shelter, clothing, safety, education, disabilities (both intellectual and developmental), and improved playground facilities.