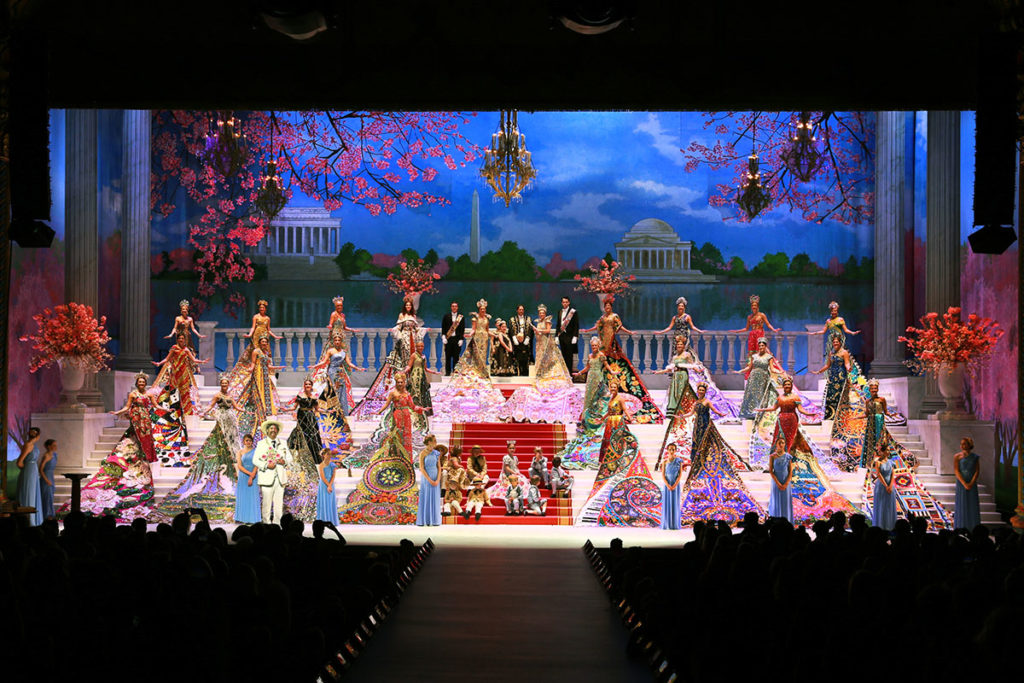 THE SETTING: The fabulous gowns and trains that are the focal point of the Fiesta coronation each year are legendary. This year the United States quite literally took center stage as the focus, too. Mistress of the Robes Elizabeth Roberts and the Court Artist Roxana Newsom spent the past year designing each work of art that would be worn by the 24 duchesses of The Court of America The Beautiful. The Order of the Alamo coronation chairman has the responsibility of appointing the Mistress of the Robes, the person to decide on a theme, find inspiration and conduct research for the Coronation robe designs. Every year the Coronation has a different theme. Some of the past themes have celebrated Argentine Republic, Treasures of Africa, Nature’s Tapestry, the Napoleonic Empire, and more. Together we focused on some of the themes that make America unique. Endeavoring to tell the story of America, but limited to twenty-four Duchesses, along with and a Queen and Princess, the details in the dresses and trains were very important according to Roberts.

With this most stately theme, the duchesses stunned in their regal gowns, each adorned with Swarovski crystals, glass baguettes, bugle beads, and custom stones. Each gown featured a 10 to 14-foot long train and weighed up to 60 pounds. The theme was inspired by American history, music, art, literature, space exploration, architecture, national parks, flora and fauna, Native Americans, America’s westward expansion and explorers to the New World. Some of the 2019 robe themes were: the New American Sound, Celestial Wonders, Celebrated Stories, Splendors of the New World, Dreams of Limitless Possibilities, and Lush Tropical Paradise.

The Princess’ train was inspired by the song “America the Beautiful” by Katherine Bates and represented the agricultural and natural riches of America’s Heartland and “Purple Mountains Majesty Above the Fruited Plain.” The Queen’s train represented architectural and environmental elements seen in Washington, D.C. representing influences from across the nation and in international friendships. The capitol, the Jefferson Memorial, the Lincoln Memorial, the Oval Office, the Resolute desk and the Washington Mall’s cherry trees in full bloom. Instead of a red, white and blue theme, we chose to focus on the delicate beauty of the cherry blossoms resplendent each spring, planted early in the 20th century to celebrate the United States’ then diplomatic friendship with Japan. No detail left unplanned, Roberts and Newsom event utilized cherry blossoms for the coronation stage backdrop showcasing this year’s creations.

The presentation of these stunning, bejeweled designs culminated with the final young lady to ascend the grand stage of the Majestic Theatre, Claudia Kiolbassa, Queen Of The Court Of America The Beautiful. The Duchesses and the Royal Princess preceded the Queen ascending the stage as well. It is a spectacular evening of pomp and circumstance.

THE STYLE: With a backdrop featuring classic American landmarks, the Majestic lived up to its name setting a most majestic scene for the Order of the Alamo’s coronation of the Queen of the Court of America The Beautiful. Fifteen duchesses from San Antonio and nine duchesses from Houston, Austin, Dallas, Fort Worth, Eldorado and Napa, California represented various themes woven into the overall collection and ceremony celebrating our state and nation. The first to make an appearance on stage were the young court pages. Each little girl, dressed in a long dress and tiny tiara, curtsied before the crowd and took her place to favorite instrumental performances that represented the United States. It was then that Lord High Chamberlain Wilbur Matthews II made his grand entrance. Serving as King Antonio XCVII was Roger Hill III and the Order of the Alamo President was Marshall Steves III. The Coronation Chairman for the festivities was  Elliott Hayne.

THE PURPOSE: Since 1891, every April, San Antonio celebrates Fiesta to honor the heroes of the historic Battles of the Alamo and San Jacinto. In 1909, the Order of the Alamo joined in what would become the city’s largest party and every year has elected a queen to reign over the celebrations. A princess and a court is comprised of twenty-four duchesses, young ladies from San Antonio, as well as outside San Antonio, are elected to represent Texas’ heritage.