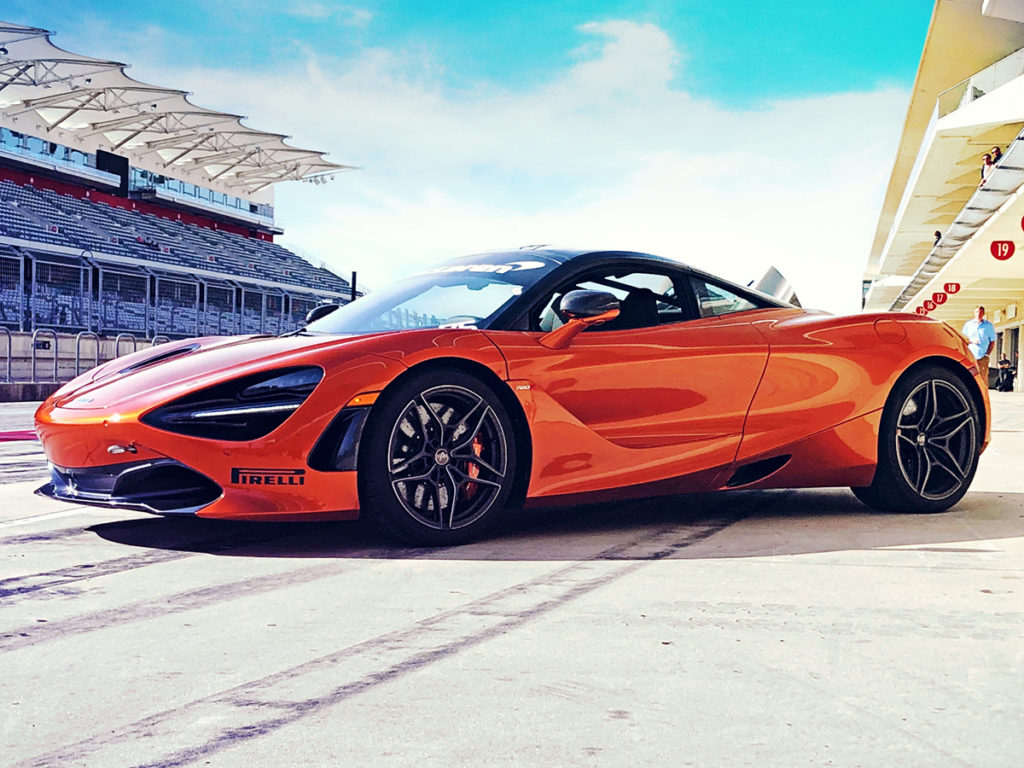 What’s it like to drive a luxury McLaren? The car was meant for both road and track, according to our automotive expert Michael Satterfield of TheGentlemanRacer.com, who takes it for a spin in the Pure McLaren experience.

British supercar maker McLaren hosts driving events for McLaren owners at some of the most exclusive racetracks in the world, from the Belgium countryside of Spa-Francorchamps to the legendary Mount Panorama of Bathurst to the Circuit of the Americas. Home of the U.S. Formula 1 Grand Prix, the Circuit of the Americas is one of the most exciting and challenging tracks in the world. Pure McLaren, the official track driving program of McLaren Automotive, allows owners to not only drive their car around a race track, but also gives them focused, in-car instruction with professional racing drivers so they can better understand how to maximize the performance of their McLaren.

Recently, I was invited by Pirelli to take part in a one day Pure McLaren experience, where I would be handed the controls of the track-focused 600LT. Not only would I learn more about the car but also  receive some much-needed seat time on one of my favorite tracks I have ever driven. Pirelli is the official tire supplier for McLaren, producing unique tires that are co-developed between Pirelli and McLaren to make sure they are the perfect fit for each car.

Upon arrival, I can tell this isn’t the typical track day, as a McLaren Senna is parked out front across from a 570S GT4 along with several other supercars. The VW Jetta press car I was driving was nice, but it did look slightly out of place next to the new Aston Martin Vantage and Ferrari 458 Pista. Walking into what is usually a garage at the track (I just recently toured these garages for the Formula 1 Grand Prix), was now a very well-appointed lounge and check-in desk. I registered and received a quick briefing on the schedule of events, and noted my next activity was lunch. Lunch was served in a suite overlooking the track. At the same time, the morning session was still out running, and the over one-million-dollar Senna, which belongs to local Austinite Josh Snowhorn, was being prepped to go out on the track that afternoon. Seeing a Senna in the wild is rare, but seeing one being tracked hard by its owner is truly amazing.

After our meal, we were directed to the driver’s meeting, where we were told that due to an accident earlier that week, there would be two chicanes added on the long back straight. That meant I wouldn’t be getting near the 201 mph top speed of the 600LT Coupe I would be driving. Back downstairs, the cars were lined up on pit row, 570S, 600LT, and 720S, as well as a few customer-owned cars like the Senna. I met my driving instructor, found a helmet, and off I went. The 600LT Coupe, 592 hp, paddle-shifted, rear-wheel-drive, is a beast. The first 600LT I drove was at the Arizona Motorsports Park (the Spider), but I had recently driven the 600LT Coupe in Dallas and loved the raw race car feel that it had, even on the street.

The first few laps I drove were to get used to the car and track, I could put it in manual mode, but had to keep on the traction control and driver aids. After warming up, I got up to speed, hitting 145-150 mph in the straights, although the chicanes cut down on the top speed we could achieve. Unlike some track days at Pure McLaren, you can pass (with permission), and soon I was getting the signal to pass some of the other cars in the group. Even though it was just an owner’s track day, there is something exciting about overtaking another vehicle, especially on a Formula 1 track. I would have several stints behind the wheel, alternating with another driver.

With each lap, I was getting faster, learning the track, and being coached on the perfect line. While we weren’t allowed to keep lap times since we weren’t technically racing, I don’t have any official times, but we definitely shaved several seconds off my first few laps. After my last round of driving, I swapped seats with the pro to see how I should have been driving the car, harder and in anger. The 600LT had so much more to give, but it’s a challenge to get comfortable when you are racing around a track in someone else’s $240,000 car. After wrapping up my session, a P1 GTR in James Hunt livery was pulled around for some special rides, and the GT4 cars were also coming out of the garages. McLaren, a maker of some of the most exclusive and expensive cars in the world, manages to have events that don’t feel pretentious and stuffy. It has staffed their company with genuine car enthusiasts who are passionate about their brand, and it shows.

If you are a McLaren owner and would like to see when the next Pure McLaren experience is happening near you, visit Cars.McLaren.com.