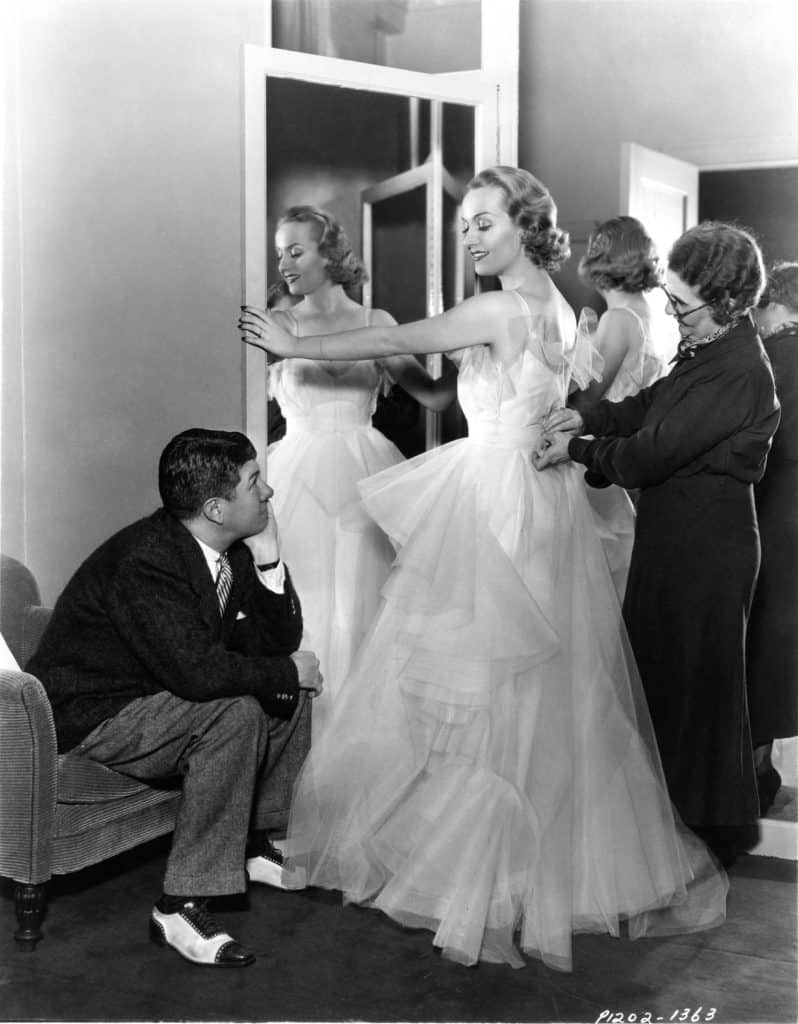 Many prominent Texans have found their fortune in Hollywood, both on-screen and off. Enter Travis Banton of Waco, who set the silver screen ablaze with his costume design talents when movies glamorously reflected our nation’s hopes, dreams, and aspirations during the Golden Age of Hollywood, according to our fashion arbiter, Lance Avery Morgan.

THE GENT FROM TEXAS

Imagine this: you were born in Waco, and you find yourself entering the hallowed gates of Paramount Pictures in 1924 to design for some of the Golden Age of Hollywood’s greatest stars of the era. The talented Texan, Travis Banton, would be one of the most sparkling things to come from Waco, beyond Dr. Pepper, by becoming one of the most legendary designers in Tinseltown’s heyday. Influences of his work can be seen in Netflix series Hollywood, Amazon’s The Marvelous Mrs. Maisel, and around-the-clock class films on Turner Classic Movies.

Banton had arrived at the fabled studio armed with a coterie of both learned and practical experience, drive, taste, and an immeasurable amount of talent. Plus, an Ivy League education from Columbia University. He’d designed for the Ziegfeld Follies on Broadway and also created Mary Pickford’s wedding gown that created an international stir at the time. From there, it was onto scaling the heights of the wildly competitive City of Angels.

At the time when sound pictures came into wide acceptance in the late 1920s and early 1930s, Banton rode to the rescue of many a director by making loud costumes…well, quiet. Or, at least, quieter. Ever the pro, he used crepe, satin, and silk chiffon, since the previously used taffeta and stiff moiré silk were literally too noisy for the new medium’s finicky microphones. With sound as a major technical issue, Cary Grant was hired on the spot from his screen test at Paramount…because he not only filled out a tuxedo nicely, but also  could walk across the room keeping an iced-filled cocktail noiselessly steady. That’s showbiz, kids.

By 1929, Banton was chief designer at Paramount, a role he would fulfill until 1938, and where he would become well-known for supplying The Paramount Look of sophistication. His success can be partly attributed to the masses of movie fans who saw his creations. In 1930, an average of 80 million viewers attended movies every week in the United States. The population at the time was 123 million, so well over half of Americans made it a ritual to visit their local dream palaces weekly to see their favorite stars.

In that pivotal style decade of the 1930s, Banton’s impact was felt from Hollywood Boulevard to Main Streets across the country and beyond, and even around the globe, thanks to the hunger for American films in lands abroad. He designed for the studio’s biggest box office stars, movie goddesses Marlene Dietrich, Carole Lombard, Claudette Colbert, Anna May Wong, and Mae West, to name a few. Banton’s epitome of elegance appears in the designs for Dietrich’s renowned vehicles, such as The Scarlet Empress (1934) and Angel (1937). For the latter film, it’s reported that Banton’s staff labored for weeks on one hand-sewn garment that was an opulent Fabergé-inspired gown of chiffon lavished with beading and bordered with Russian sable at a reported cost of $8,000 (about $150,000 in 2021 dollars).

To offset Dietrich’s conservative acting style, Banton loaded on feathers, sparkling beads, and lush furs for her over-the-top costuming so she would dominate any scene over her co-stars, even with scene-stealers like Gary Cooper and Cesar Romero. These stunning creations were magnetic to not only the camera, but also to the silver screen. They exuded strength, sexiness, and style that fans hungered to see. Dietrich, always the consummate professional when it came to her personal publicity, was a strictly self-disciplined actress and Paramount star. She reportedly had no problem standing for fittings in her wardrobe-dependent films for at least 120 hours per film. It was a creative match made in heaven for both designer and his movie star muse. They also gave the world a sexy, tailored trouser suit that still resonates today with fashionistas. Of all the stars, Carole Lombard (whose life tragically ended in a plane crash in 1942 while selling war bonds) was his most prolific muse since she also hired him to dress her off-screen. Her long, languid figure was ideal for the bias-cut dresses that especially flattered her, a Banton specialty. In fact, his designs were so loved by Carole Lombard that she demanded he design her costumes for My Man Godfrey and Love Before Breakfast (1936), Nothing Sacred (1937), and Fools for Scandal (1938), which were made by other studios, beyond Paramount Pictures. Now that is star power at its zenith, and his work with both Lombard and Dietrich is still referenced by today’s leading designers.

Life on the lot wasn’t always rosy with his clients, nor was every movie star a dream costume collaboration. One studio crisis that Banton recalled required studio chief Adolph Zukor to negotiate a feud brought on by Claudette Colbert, a longtime Banton admirer, and his costuming for Cleopatra. After rejecting two sets of costume sketches for the picture, she supposedly streaked Banton’s third set of beautifully painted drawings with blood deliberately drawn from her finger to emphasize her displeasure.

Legendary costume designer Bob Mackie felt otherwise about Banton and Colbert’s teaming. ”I recall seeing a revival showing of the pre-code Cleopatra (1934) at a theater in Englewood (Los Angeles) at the age of 14. I was in awe and mesmerized by the costumes. So, I thought to myself, ‘one day I’ll remember all these clothes.’” He continued, “Little did I know that I’d be designing similar sorts of beaded numbers for Cher on The Sonny & Cher Show in the 70s. They were so scant and skin-baring that I recall it being an issue with the CBS censors at the time.” It was an example of how Banton’s creative legacy would carry on. Another conflict involved a fitting with Banton and an ungrateful actress of the era, Nancy Carroll, who ripped a beaded garment from her body while Banton and his staff stared in disbelief. Sometimes, there’s just no pleasing a client, as any designer can attest.

While Banton designed costumes for many of the gorgeous icons still remembered today in films, part and parcel that came with ruling the Paramount costume territory was designing for B-movies that were also popular with the American public. Making a silk purse out of a sow’s ear, almost literally, he designed for forgettable potboiler films with titles like Accent On Youth (1935), Wives Never Know (1936), I Met Him In Paris (1937), to name a few of the many dozens, yet Banton still made every leading actress look every inch the lady. While at Paramount, Travis Banton designed for over 160 films, a tremendous outpouring of talent. In that era, studios released a new movie every week of the year, so his fingerprint on so many films can still be seen by cinephiles.

Part of that success and household name recognition was due to the studio’s public relations machine that was always honed and humming, offering up the major movie lots’ designers as trustworthy authorities in style. When a fashionable fad swept the country, like broad shoulders or over-accessorizing, Hollywood was usually blamed for it in the film and women’s interest publications. Travis Banton complained about this once in a 1937 film magazine when he was quoted saying, “Hollywood was given undeserved credit for eccentric styles frowned upon by Paris designers. I admit that the movies sometimes began disturbing vogues—like going hatless. Perhaps the hatless fad started in Hollywood generally because of its great weather and the healthy hair of its stars.”

It’s hard to imagine now in the overly image-conscious Hollywood that the Academy AwardÒ for Best Costume category didn’t even exist before 1948. But designers became household names, thanks to the incessant barrage of movie magazines that kept their readership informed of the film stars and teams who helped them uphold their glamorous perch high atop Mount Hollywood. An example from a screen magazine of the day offered Banton’s advice: “Don’t copy the screen costume you see exactly, because they are often too “stagey” for the average women’s wear. Our styles for picture purposes are many times the expression of the “mood” of the star in that sequence—and not the expression of the style of the moment—so don’t be led astray, and if you copy screen styles, do so in moderation and use the idea more than the exact gown or suit you admire.”

With his high outpouring of design talent, by 1939, Banton was ready for a change when his contract at Paramount ended. He pulled up stakes and moved to 20th Century-Fox studios, where he dressed stars Loretta Young, Betty Grable, Gene Tierney, Carmen Miranda, fellow native Texan Linda Darnell, and others until 1941. From the early-to-late 1940s, he was the designer at Columbia Pictures and RKO Studios before becoming the chief designer at Universal Studios, dressing actresses Deanna Durbin, Merle Oberon, Susan Hayward, and Rosalind Russell. Banton definitively proved that during the 1940s, Hollywood’s American design talent could surpass that seen in Paris.

Banton’s excessive drinking was the primary reason for his knocking about several studios. Yet, his talent was matched by only a few designers of the era, such as Edith Head, Walter Plunkett, and Helen Rose, all in a rarified circle of talent. His friendship and close professional relationship with leading lady Rosalind Russell were cemented with her films Sister Kenny (1946) and The Velvet Touch (1948). After Banton’s final motion picture assignment, the biopic Valentino (1951) for Columbia Pictures, he exited the film business. Instead, he returned to work for his former Paramount boss, Howard Greer of Greer, Inc., to design clothing for private clients. He then returned to Hollywood once more in 1956 to open a fashion salon with Russian designer Maruisa Toumanoff Sassi, then entered stage left to collaborate in designing the extravagant gowns worn by his old pal Rosalind Russell in the 1956 triumphant Broadway production of Auntie Mame.

Late in life, Banton recalled that in Hollywood, he had “loathed those endless barbecue things, deadly-dull afternoons spent staring at people wallowing in swimming pools…in a place where even the French champagne went flat as soon as it was poured.” He admitted, however, to a certain ambivalence, for he needed the studio earnings that supplied the art, antiques, and extravagant lifestyle compatible with his curated tastes. Merle Oberon summarized the feelings of their mutual loyalty when she insisted that Banton dress her in the 1945 film, A Song to Remember. She said that Banton “not only knew what the character ought to look like, but also understood what an actress was the happiest wearing, which is very rare for a costume designer. As a result, I never found it necessary to make a single change on any of his drawings.” Travis Banton died in 1958, designing for television and variety programs like The Dinah Shore Show. Yet, Texans will always be able to claim him as one of its most talented native-born sons whose creativity can always be seen any time in vintage films on Turner Classic Movies.