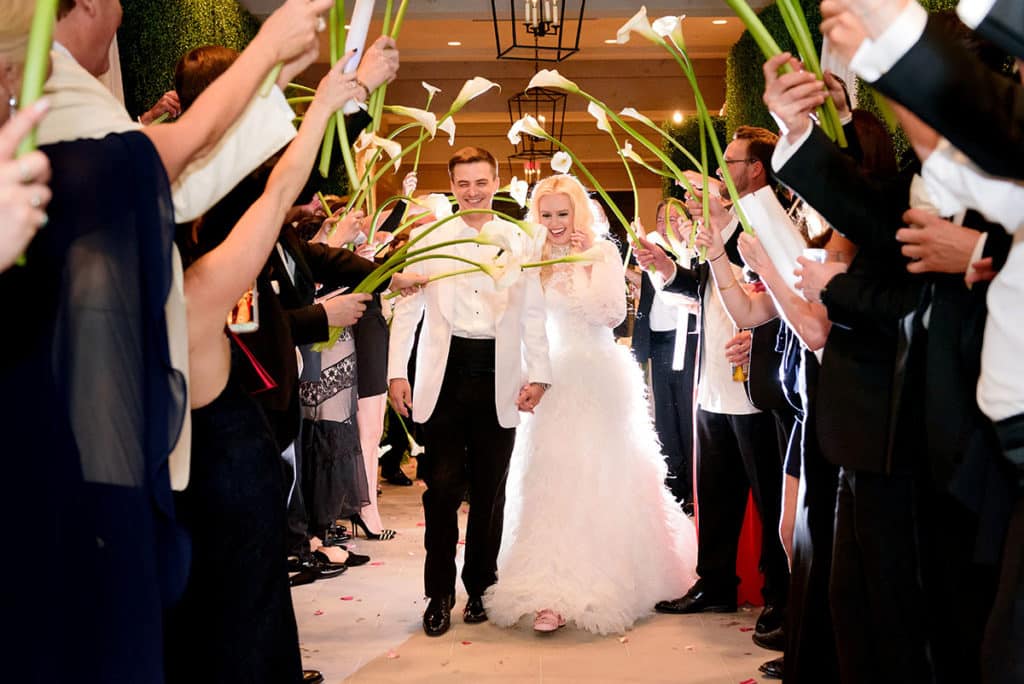 Texas natives Sheridan Butler, the daughter of Renee and Eddie Butler, and Tyler Binford, the son of Ann and Weston Binford, grew up in Austin. She went to Saint Michael’s High School, then Ole Miss. He went to Westlake High School, then Texas State. Even though their childhood homes were both in Westlake, they found each other after they graduated from college. Tyler said he was attracted to Sheridan’s beautiful smile, and Sheridan found Tyler’s sense of humor irresistible. They dated for four and a half years before Tyler drew on his good humor to proclaim his love for Sheridan.

It was Halloween 2017. Sheridan was dressed as Regina George from Mean Girls, and Tyler as Aaron Samuels (Regina’s boyfriend). Sheridan was hosting a party at her home when Tyler managed to sneak out of the party without her noticing. A young trick or treater rang the doorbell escorted by someone dressed in a bear costume. Before Sheridan could think, the person dressed as a bear pulled her out onto her front porch, removed the bear head and proposed. Sheridan said yes to Tyler in the bear costume.

That began a very busy year of meticulous wedding planning and six incredible parties to celebrate their engagement. Friends and family toasted the couple at a Monte Carlo-themed party at The Highball, a weekend-long party for the bridesmaids and groomsmen at a Lake Austin home, another patio party at a Lake Austin home, a BBQ, Bubbles & Brews, a Mad Hatter bridal tea party at the Headliners Club and an Around The World Beer Tasting Party held at Chateau Bellevue. Also, they chose Vickie Roan at The Menagerie to help them with all their wedding registry needs.

Sheridan and Tyler wanted their wedding to highlight family traditions and be filled with fun activities, flowers, themed rooms, specialty drinks, favorite foods, all kinds of music, dancing, more flowers, and photos of them during all stages of their lives. The Thursday night before the wedding, Sheridan and her mother, Renee, hosted the bridal party dinner at Tarry House. The rehearsal dinner was held at the Headliners Club (just like Sheridan’s parents’ rehearsal dinner 35 years earlier), and the Welcome Party after the dinner was hosted by the bride’s grandmother, Ann Butler.

The ceremony was held at Tarrytown United Methodist Church. Barton Strings provided the music as the bride walked down the aisle carrying a bouquet of calla lilies that was just like her mother’s bouquet when she got married. The flower girl’s basket was the same basket that her mother held for Sheridan’s parents’ wedding. She wore a Rita Vinieris-designed wedding gown accessorized with her mother’s diamond and emerald earrings for something borrowed.

Austin Country Club was transformed for the festive reception. “No detail went unnoticed,” said Sheridan. Westbank Flower Market arranged more than 3500 white calla lilies for the grand entrance. Two thousand of them stood waist high to greet guests walking down the long aisle to the party, and through the next set of double-doors, the walls were completely covered in greenery so that the callas seemed to be growing from the floor.

The bride and her mother created the names for the themed reception rooms as well as the creative names for each food item. Some of the themed rooms included the Dance Room of Ice with a mirrored dance floor and a 16-foot long ice bar that had two large beer luges on either corner that were filled with beer for guests to refill their drinks. The wedding cake was themed Beyond the Cake of Towering Jewels and the groom’s cake was called Tyler’s Texas Adventure Cake. “It had an oil rig, guitar, Westlake Chaparrals logo, poker chips and Coors beer on it,” Tyler said. “All of my favorite things besides Sheridan.” Matchmaker provided the music for guests who danced the night away.

The bride is active in the Austin community with the Junior League of Austin and the Andy Roddick Foundation and the groom works at Capitol Wright Distribution. The happy couple, Sheridan and Tyler, had a spectacular send off to start their married life together. They left in a 1963 Bentley through a waterfall of fireworks and a calla lily salute. They honeymooned at The Lodge at Pebble Beach and Half Moon Bay. It’s always been Sheridan’s dream to stay at The Ritz Carlton in Half Moon Bay since she calls it a “castle on the beach.” She thanked her parents by saying, “This was the wedding I always dreamed of. This was the wedding of the century for Tyler and me, and a day we will never forget.”