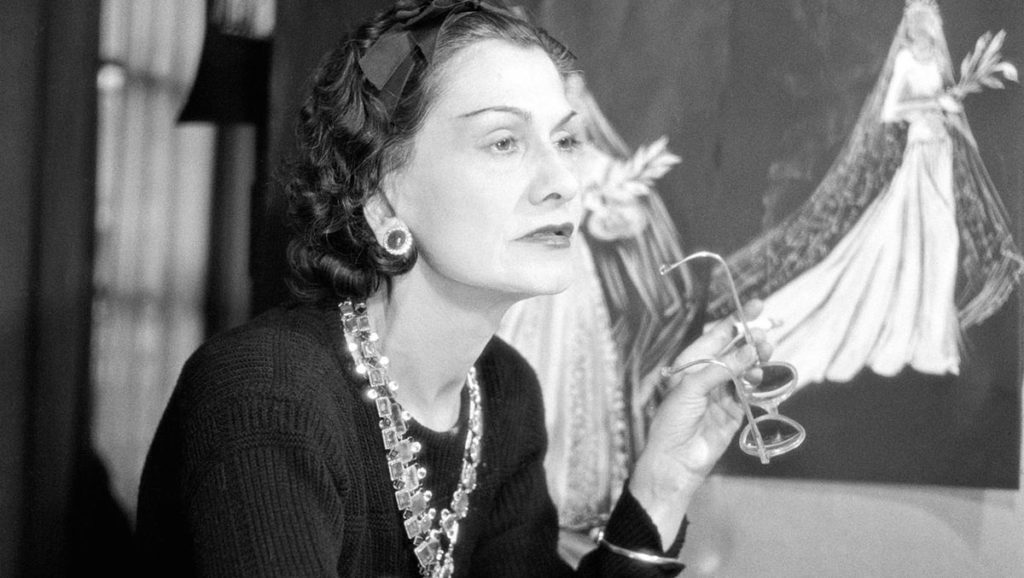 Our very own fashionisto Gordan Kendall, considers Chanel’s influences and what she might think of shopping in Texas… for herself, today, fifty years after her death. Her legend lives on, yet does her style translate?

These days, the lists go on and on about what has gone up, down, came, or went. Whether related to the economy, the recent election, the Pandemic, the price of eggs, there’s always some marker. Of course, fashion can’t miss out on any trend. The year 2021 will be no exception as it will mark the milestone of the fiftieth anniversary of the death of Gabrielle “Coco” Chanel. What more can be said about this icon and her lifetime contributions to fashion? Any follower worth her or, now his, gold buttons and “Boy” bags, knows Chanel’s story.

Convent raised, where she learned to sew, and through skill and all sorts of talents, plus good timing, and even better luck, she established not only what we know as the Chanel brand, but also brought about new ways of thinking about fashion, based on simplicity, ease, and comfort. Her contemporary, Cristbal Balenciaga, noted Chanel had very little taste. Almost all of it good, he exclaimed.

Extravagant simplicity, priced simply extravagantly, came to be le style Chanel. Of course, it was Karl Lagerfeld, of late as well, who masterfully designed Chanel clothing and accessories that kept it consistently current with times and trends. Even so, much has happened since Chanel wafted into fashion’s hereafter that cold January morning in 1971. Given the opportunity to revive her 137-year-old spirit, what might she think of her fashion legacy now? How it has withstood her absence? In the world of fashion fantasy, it’s not too difficult to imagine what it might be like to go shopping today in Texas with Chanel…for Chanel.

The lone figure in a beige wool suit stepped tentatively out from the Dallas mall and into The Store, the one that in her day Mr. Stanley had minded and had so feted her in September of 1957 with its very own fashion award. Then, they staged a fanciful show, a defilee of cows done up in fancy hats to the mirth of the fashionable crowd. Today, however, taking her sunglasses off and tucking them into the flap bag hung over her arm, she was here, not to party, but to peruse what had happened in her absence.

“Bon. Bon. Bon.” she exclaimed, seeing the entire wall of fragrances bearing her name. “…and right inside the front door, too. I like that. I’ve always said ‘a women should wear perfume where she wants to be kissed’…because I want to be paid when she wears mine. Oui?”

“Don’t be ridiculous. It is the Chanel suit. Whose would I wear? That bit of upholstery Dior calls a suit?”

“Then, perhaps, you should visit our boutique upstairs?”

Going up the escalator, she peered at the people she saw below. Where had most of their clothing gone?

“C’est quoi cette folie. What is this, craziness?” she exclaimed. “They are mostly naked, these young, not so young, people. I said it in 1968, and I must agree with myself, fashion has become nothing but une exhibition de Viande, a show of meat. But still, my sandals do look so well even with these awful blue pants cut so short on the legs with their edges fraying loose.

There was a flurry of excitement as she entered her namesake boutique on the third floor. Associates and other shoppers crowded around; all were holding some kind of metal plates in their hands. Annoying, as they occasionally emitted blinding blinks of light into her eyes.

“Love the hat,” exclaimed one young man, who then swept it off her head and onto his own. “Post this on Insta, everyone.”

“Vintage, you say? Mais, non, this is…was…from my latest collection. No one will buy someone else’s old clothes to wear. Quelle folle. There is no fashion in old clothes, I predict, you’ll see,” she said with a knowing wink of her eye.

Then, all of a sudden, she was whisked into the changing room by the crowd, each holding some kind of garment, at once strange, but also somehow familiar, as each bore her famous “double-C, interlocking logo, the one she knew so well.

“No, go with the leggings under the shorts,” said one.

“But how about this tunic top, instead?” asked another.

“We need to fun-it-up,” declared one holding studded wrap band bracelets and a beret to replace her bowler hat. “Here… Post this on Insta.”

“Now, I know what it was like in the cabines, my girls being pushed and prodded about,” she sighed.

After a bit of a tussle over whether to ‘just go with the high-tops and definitely not the booties,’ with the tweed-covered sneakers winning the most likes from someone or something they seemed all able to communicate with through those strange metal plates, she emerged from the changing room and stood in front of the boutique mirror.

“Here,” said the young man, still wearing her hat, “You need this,” and with a flourish, he belted a large, long zippered pouch around her middle, her Chanel name, in all caps, boldly displayed across her very own Chanel derriere. “Quick. Post it on Insta.”

“What’s this? A costume pour le sport?” she asked into the mirror. “Ah, but these what you call ‘sneeek-eures,’ they are comfortable. Massaro’s slingbacks can cut so. Even if I did design them for him.”

Gone was the beige suit. Instead, she stood in red and black shorts worn over black patterned leggings, surprisingly easy to get used to for someone so used to wearing skirts. So much better able to move about in. A sleek sweater set, one red beneath a red and gold plaid, replaced the blouse and jacket. The enormous black beret sat at a jaunty angle on her head.

“Totally love the fanny pack,” said one. “It makes it casual…post it on Insta.”

“Un ‘fanny-paque’? And what are these dreadful things you keep holding up into my face?” she asked.

“This ‘Insta’ what is it?” Chanel was perplexed; she didn’t like to be perplexed.

“Look,” said one showing her the device, “You can post your picture on it. Get followers, even buy stuff.”

“Indeed” Chanel said, as she turned the metal plate, now alive with images appearing on its surface, in her hand.

“You mean it can really be a phone and a camera at the same time? These ‘followers.’ Why would anyone want to follow me? I can buy things, Non? With this ‘Insta’ character?”

The crowd gathered around Chanel, each posing with her, moving her this way and that to “get the right look” All around, other shoppers watched the group, taking their own pictures at what must surely be a celerity in the store. The young man handed back her hat and clothes, folded into a glossy black carrier bag for the trip back.

“How would you like to pay for these?” asked the associate.

“Oh, of course, just how you say ‘post it on my ‘Insta’?” Chanel said. She waved a goodbye and headed over in the time she had left to see what that Christian Dior had once again decreed what everyone, except she, should wear.