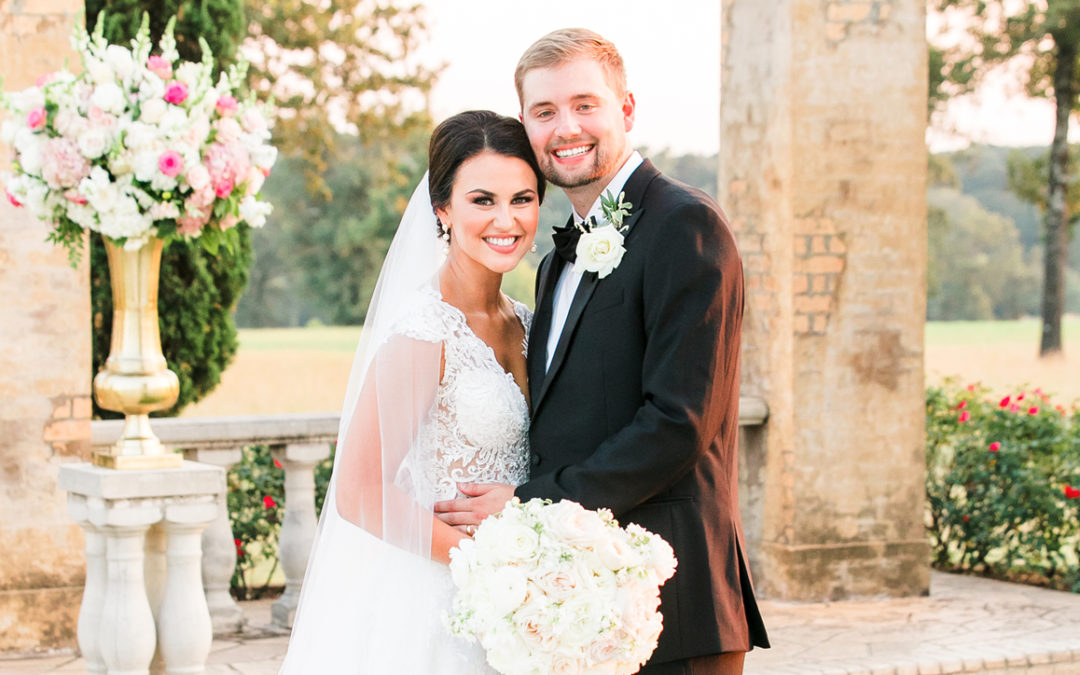 When Madison Fuller walked down the aisle to wed Drew Evans, she was accustomed to the spotlight after being chosen Miss Texas America in 2018. Texas natives Madison, the daughter of Jina and Mike Fuller of Fairfield, Texas, and Drew Evans, the son of Paula and Greg Evans of Tyler, Texas, married after a nine-month engagement. Madison’s dream of becoming Miss Texas America was an important part of the couple’s time together, as well as their shared spiritual convictions. “He is the funniest, most caring, and loyal person I’ve ever known. He loves deeply,” shared Madison Fuller Evans.

The clever groom popped the question with an unconventional plan. After a courtship of five years, Drew thought there was probably no way to truly surprise Madison, so instead, he left a note on her kitchen counter the morning of the proposal…and he made visits to her job as a kindergarten teacher throughout the day. Their family and friends continued the surprise all day long with coffee, flowers, lunch, and more special deliveries. That afternoon, Madison’s sisters picked her up to get their nails done, and when she arrived home, there was a dress to wear lying on her bed. A couple of hours later, Drew had his two best friends drive her out to the picturesque Kiepersol Vineyard in East Texas, where they met at the beautiful setting where he proposed. Then, the surprise continued with all the couple’s favorite people gathering for an after party.

The couple, both graduates of Texas A&M University, were married months before in a private ceremony with only family attending due to COVID-19. They proceeded to celebrate on a grander scale months afterward, where their festivities began with a rehearsal dinner at The Grove. The following day at Villa Di Felicita, the wedding was held, dazzling in shades of blush, ivory, and white designed by Ricardo Tomas Weddings’ event team. The bride wore a gown by Winnie Couture while carrying a beautiful bouquet. The floral designs that were abundant at the venue were created by La Tee Da Flowers.

The bride and groom shared communion during the ceremony officiated by Pastor Ken Pruitt. The bible used in their first wedding, which had previously occurred, was gifted to the couple to use in both of their wedding ceremonies. Madison’s bridesmaids included seven of her Miss America sisters who traveled from around the globe: Ashley Baldwin, Natalie Clopton, Courtney Cobia, Avery Covington, Haley Fenley, Meagan Mayo, Abby Ortiz, Anjelica Quisenberry, Morgan Roper, and Tianna Vanderhei. The bride’s sister, Mallory Fuller, was the maid of honor, while Morgan Wood served as the matron of honor. Drew’s best men were Jimmy Negem and Keaton Yeatts. His attendants were Rob Fenley, Jacob Frazier, Phillip McKinney, Sam Morey, Nick Negem, Garrett Pillsbury, Nick Roman, Jared Stewart, Hunter Stinson, and Daniel Wood.

Afterward, the reception, also held at Villa Di Felicita, commenced with signature margaritas followed by an authentic Mexican buffet supper. The strawberry wedding cake with buttercream icing, was created by The Village Baker. During dancing provided by the music from CMB DJs, the groom and his mother provided more entertainment with a choreographed dance they created, matching their outgoing personalities to the guests’ delight. At the end of the night’s revelry, the Aggie war hymn was chanted, and a colorful fireworks show ignited the evening’s moonlit sky.

The bride, a teacher with the Tyler Independent School District, and the groom, who works at Edward Jones Financial Planning, permanently reside in Tyler. They plan a honeymoon to Jamaica that will occur later in 2021. “Being able to celebrate with so many special friends and family during such a difficult year was such a blessing,” confides Madison Fuller Evans. 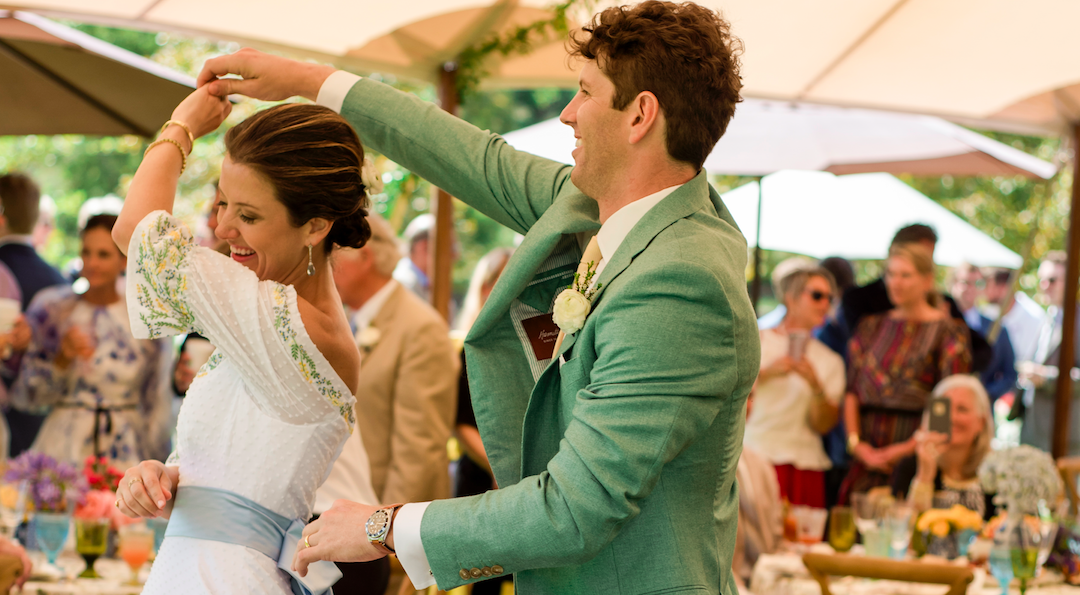 UNDER THE TEXAN SUN

Alice Johnson and Nick Adair MaRry In The Hill Country

Alice Johnson of San Antonio and the Texas Hill Country and Nick Adair of Houston found love in an unexpected place. What began as a professional relationship when Alice applied for a position with Nick’s family restaurant business, Adair Concepts, sparked into a romance only after the newlyweds had worked together for quite some time. After nearly three years of courtship, Alice and Nick tied the knot during a picturesque daytime ceremony under the Texas sun, surrounded by their nearest and dearest family and friends.

With a shared respect of family and tradition, it was only fitting that Alice and Nick planned an authentically elegant and intimate gathering at the bride’s family-owned Chinquapin Ranch in Mountain Home, Texas. Alice’s parents, Cecilia and George Hager and the late Kley Johnson, and Nick’s parents, Betsy and Gary Adair, welcomed 75 of their family members to celebrate the matrimony of their children.

After the exchange of vows, guests took their seats under a classic white tent enveloped in  greenery and flowers for a brunch reception on the lawn overlooking the water. Sophie Lochte of Sophie’s Bakery in Fredericksburg made the wedding cake  with vanilla and confetti on the inside and  flowers cascading down the side. After brunch shared by the families toasting, dancing and just enjoying the afternoon, everyone changed into their swimsuits and spent the rest of the day swimming  at the ranch. Then, that evening guests loaded a bus and enjoyed dinner at Francisco’s in Kerrville, hosted by the groom’s family, complete with mariachis and more festive celebration. After dinner the attendees ended the evening at the local speakeasy bar, Azul, across the street from the restaurant. It was a memorable day that began at Chinquapin Ranch, which is also available for special event rentals.

The newlyweds and their immediate families all traveled together to Capri, Italy for a group vacation the day after the wedding. The couple then traveled on to South Africa for the remainder of their honeymoon exploring Cape Town, Franschhoek, Kruger National Park and Mozambique. The couple resides in Houston, where Alice is in freelance marketing and Nick is co-owner of Adair Concepts.