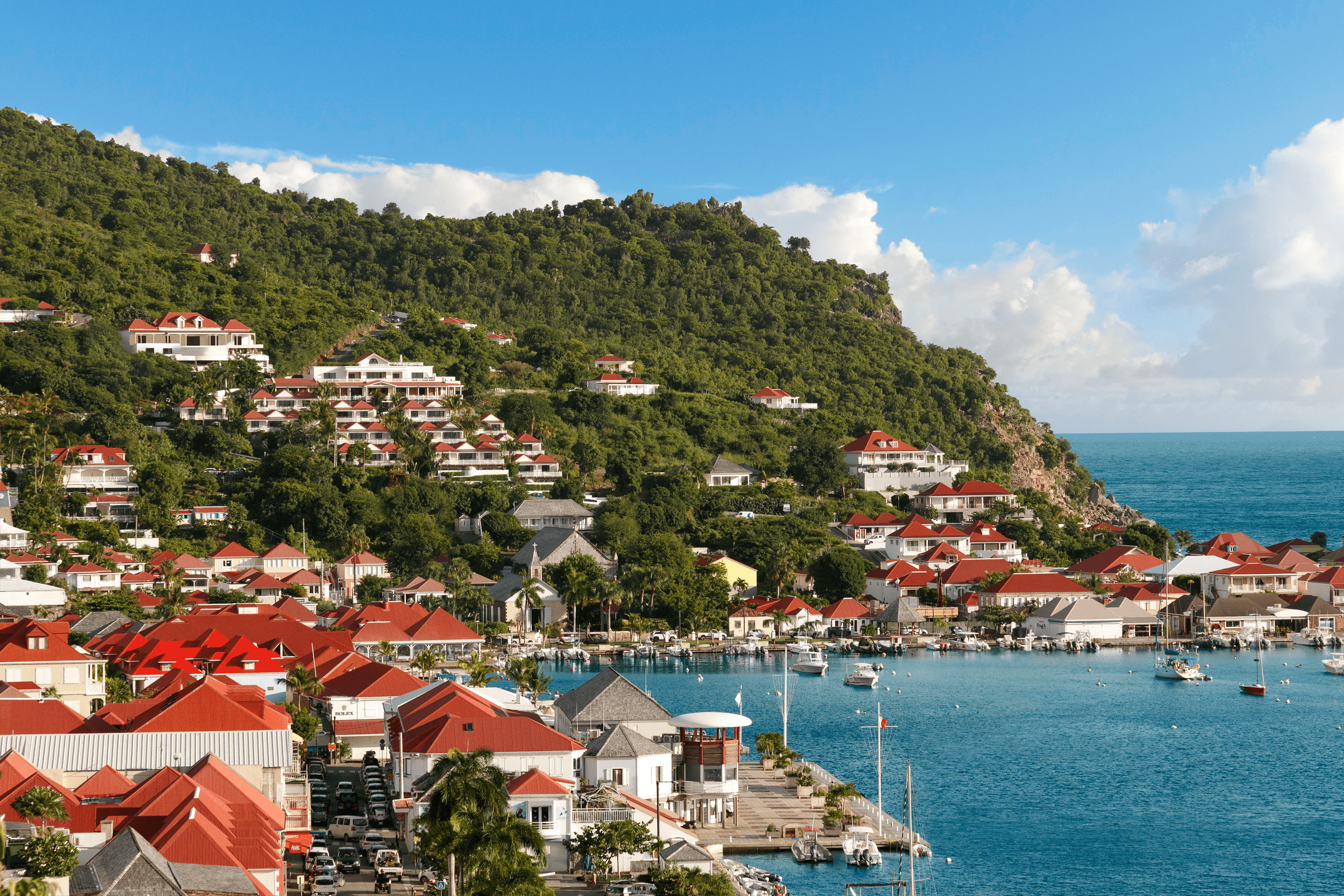 Let’s face it: St. Barts is an insider’s destination. These days, the celeb hideaway is more popular than ever, according to our intrepid global reporter, Kristen O’Brien, who recently dropped into Le Carl Gustaf, part of the Hotel Barrière Group, to experience the best that luxe beach life has to offer. 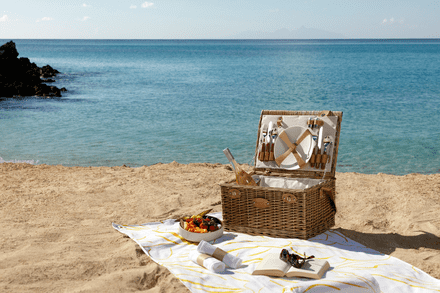 The prop plane pitched to the right, then to the left, bucking and rolling over the wind currents as we made our descent, but first we had to clear a mountain range, followed by a sudden drop in altitude, before the plane could hit the runway at a great speed and pull to a stop before ending up in the azure-colored bay at the end of the 2,100-foot runway. Most runways are between 8,000 and 13,000 feet long for comparison, so landing safely was a welcome end to the beginning of my adventure.  Welcome to Saint Barthélemy, aka St. Barts or, à la française, St. Barth. Personally, I thought the landing at Gustaf III Airport was exhilarating, but then again, I’ve always loved roller coasters. For a less dramatic arrival one can take the ferry from St. Maarten, usually a 45-minute ride, give or take some choppy waters. St. Barts is not easy to get to, yet certainly that is part of its allure and mystique.

Seeking some R&R, with ample beach time and sun, and a dash of glitz and glamour, I set my sights on St. Barts recently for four nights and it did not disappoint. The “season” on the island is a long one, from early November until the end of August, when most hotels shutter for the hurricane season. By the time I arrived, the eight-mile island was starting to pick up steam, but the height of the season is between Thanksgiving and the New Year when the population of almost 10,000 grows to include a who’s who of monied and well-heeled globe trotters and their yachts on display in Gustavia’s harbor. 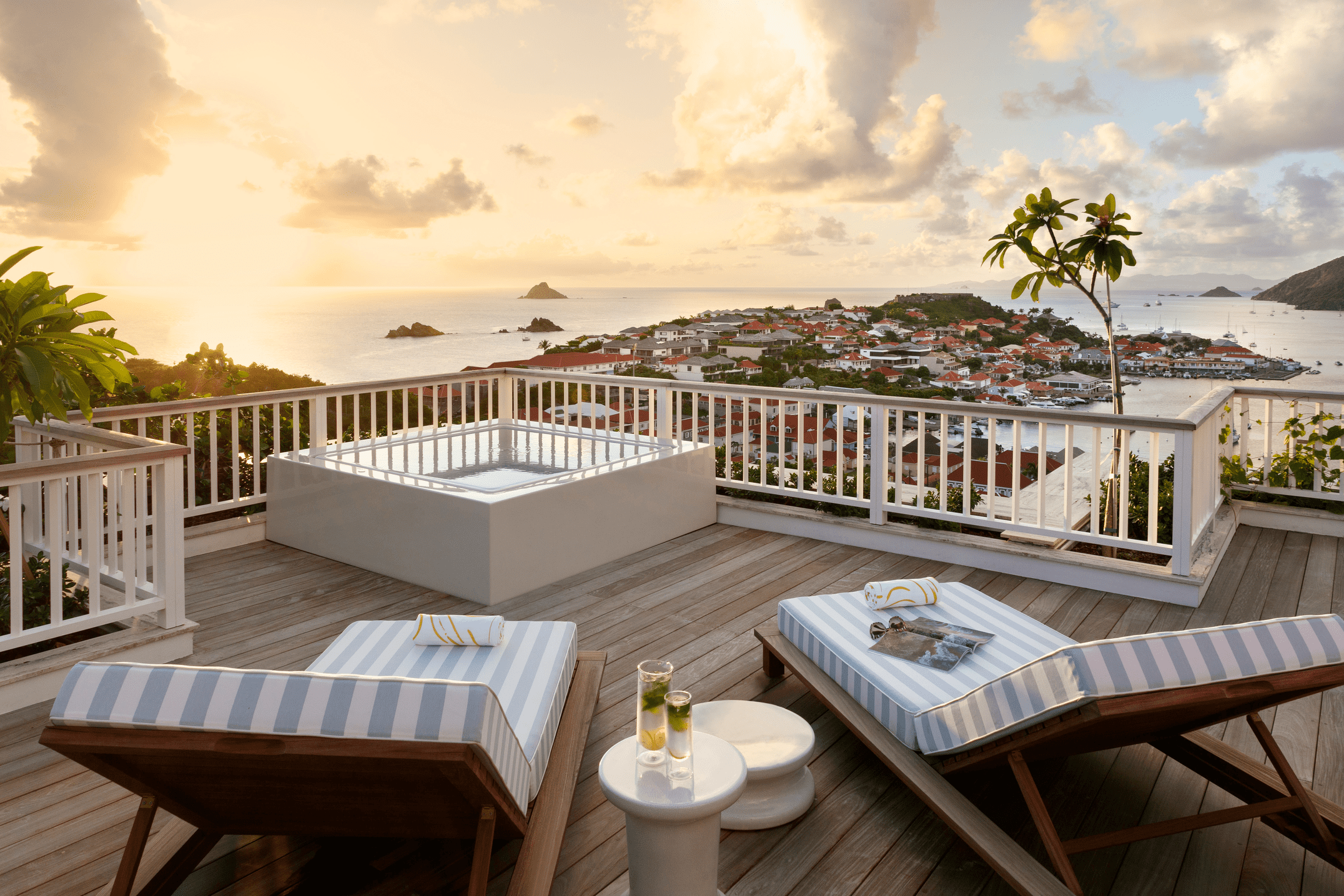 The island’s capital is named for King Gustav III of Sweden as the island belonged to Sweden from 1784 until 1878 when it was sold to France. Historically, the first jet setters arrived in the late 1960s when the Rockefellers and Rothschilds started to frequent the island and build homes. Those in the arts soon followed, with Mikhail Baryshnikov and Rudolf Nureyev as early devotees, and Hollywood celebrities like Steve Martin and Chevy Chase, and musicians like Jimmy Buffett discovered the allure of paradise. Today there are too many A-listers who frequent the island to mention.

As a guest of the five-étoiles, Le Carl Gustaf, part of the Hotel Barrière Group, I was warmly welcomed to the property nestled in the foothills overlooking Gustavia with a glass of champagne and a Carl Gustaf fan. The panoramic view immediately took my breath away as the sun set over a series of mountains rising out of the Caribbean Ocean, the red tiled roofs and colonial buildings of Gustavia, the marina with super yachts, lush palm trees and frangipanis. After a ridiculously early start and an almost twelve-hour journey from Texas, I felt like I had arrived in heaven. 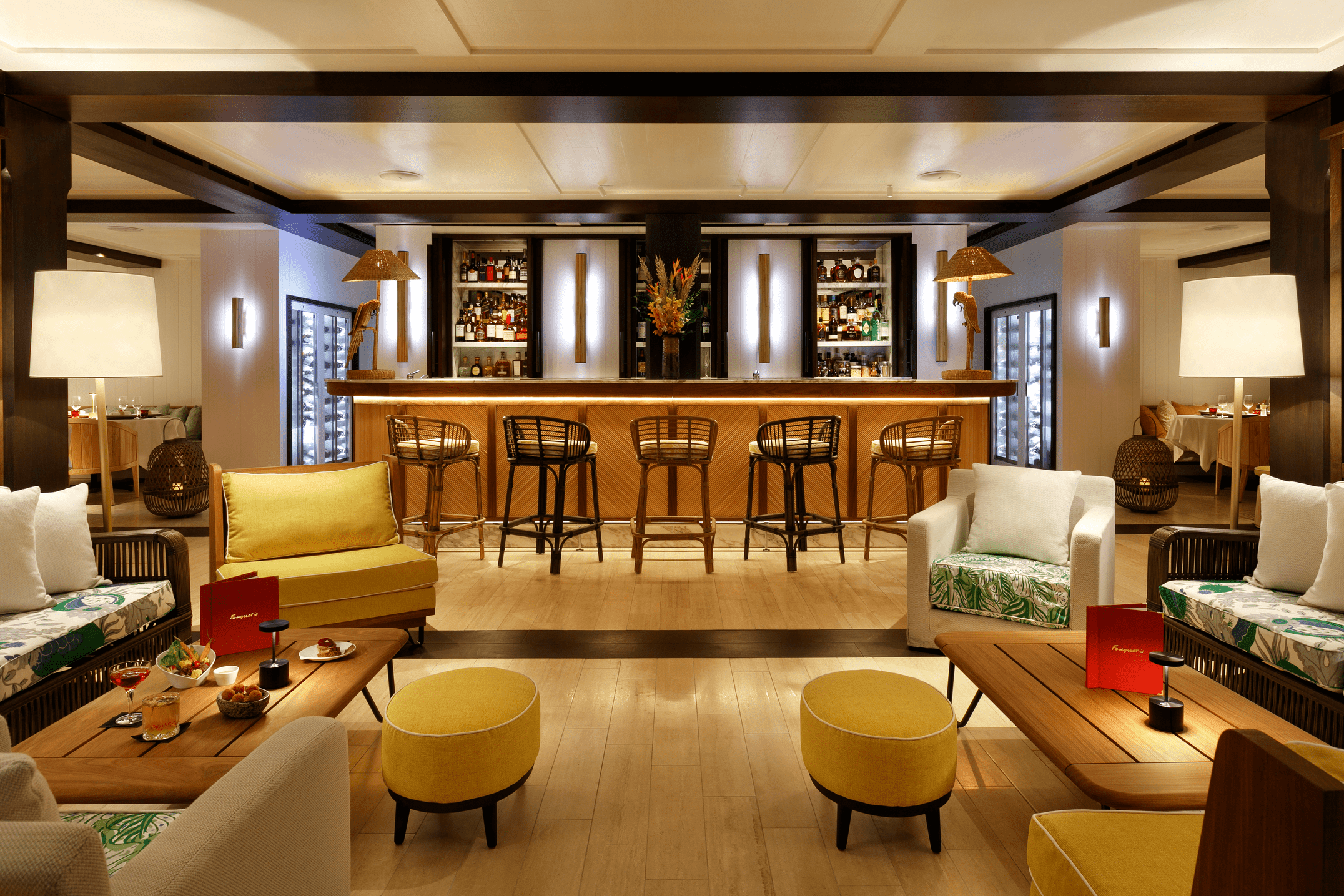 Designed by renowned French firm Gilles & Boissier, Le Carl Gustaf exudes luxury, elegance, and French-style charm throughout its 21 rooms, suites, and bungalows that all face the ocean. The bungalows come with plunge pools, and the 5-bedrrom Villa Diane comes with a private chef and butler. The colonial style Carl Gustaf was built in the 1970s and purchased by the Barrière Group in 2016. With a roster of luxury properties all over France, including Cannes and Courchevel as well as Marrakech, and the recently opened Hotel Fouquet’s in New York, this was their first venture into the Caribbean. Renovations had to be halted in 2017 due to Hurricane Irma and therefore it wasn’t until late 2020 that they finally reopened. The hotel has a chic, French ambiance, yet also fits in with the laid-back atmosphere of the island while still offering all the necessities and luxury one could desire. Pricing for the villa starts at just under $19,000 per night and for the other accommodations, there are some rooms available during the low season for $781 a night.

After settling into the beautifully appointed bungalow and catching the final rays of sunlight dipping behind the islands in the distance, I made my way up the steps to Fouquet’s to discover the cuisine created by three-star Michelin Chef Pierre Gagnaire, a mélange of traditional French cuisine with Caribbean accents. The restaurant is mostly open air with wooden floors and wicker furniture, a Caribbean house with Riviera accents, so one is always enjoying the view of twinkling lights below in Gustavia, and the warm tropical breeze tousling my hair. I was keen to try Fouquet’s signature cocktails by Emanuele Balestra created with specialty edible scents from his “Bar A Parfums.” I ordered the “Daiqui Jasmin” with Havana rum, fresh squeezed lime juice, and jasmine scent which was lightly sprayed on my wrists and then in my glass to ensure a complete olfactory experience. 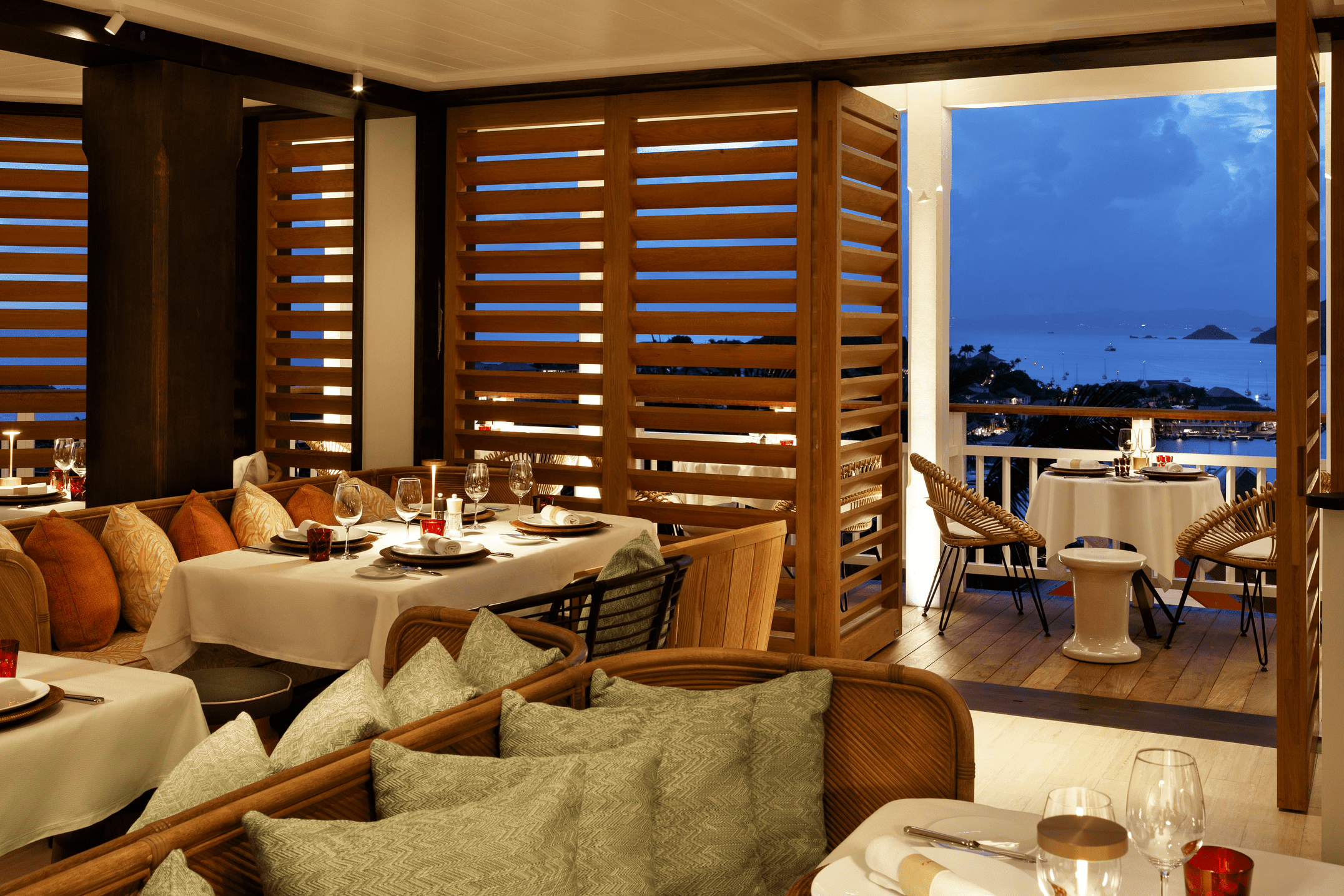 The consumable scents such as “Mandarine & Lavande,” or “Pamplemousse Jaune & Mimosa & Pelarconium Rosat” are elegantly displayed in a box on the bar. Balestra is the “King of the Aromatic Cocktail” and holds court at the Bar Galerie Le Fouquet’s at Le Majestic in Cannes. Balestra creates his palette of flavors in the form of extracts and changes them up depending on the season. For dinner I ordered a Périgord black truffle rigatoni with parmesan while my guest ordered the local catch which was prepared and deboned in the usual French Guéridon service style. The sommelier took great care of us, recommending wines to accompany each dish. I did forgo the trolley of mature French cheeses opting instead for the Crêpes Suzette, also prepared like the fish, “à table” with great panache and showmanship. The dining experience encapsulated all the elegance of a top French brasserie with the welcoming casual simplicity of the Caribbean. 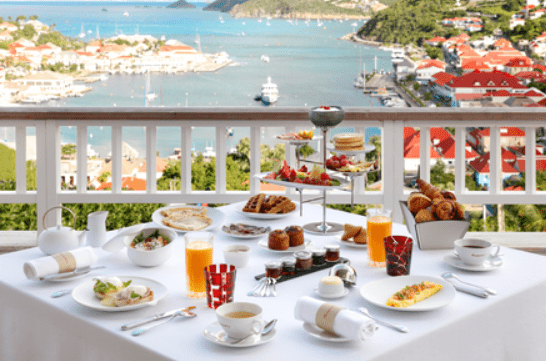 What’s wonderful at the Carl Gustaf is that you really don’t need a car and can walk to most of the places you’d want to go…a fabulous beach restaurant and club at Shell Beach, the cute boutiques and haute couture shops of Gustavia, the trendy bars and other incredible restaurants like Bonito, Bagatelle, and Orega, are all walkable, if you don’t mind climbing down a steep hill…and up again. The hotel does provide electric bicycles for their guests, as well as offering car service to the ferry or airport, and the stellar concierge team can organize taxis to other destinations on the island. On the first day I had a reservation at Shellona, the private beach club and Greek restaurant on Shell Beach, a quick five-minute walk from the hotel and where guests can easily get a day bed and soak up the sun, enjoy an Aperol, mix with interesting people from around the globe, and watch one of the best sunsets on the island. Like most of the beach restaurants on St. Barts, and there are 22 beaches on the island, there is  usually a DJ on site creating a carefree party vibe similar to Ibiza or Mykonos. 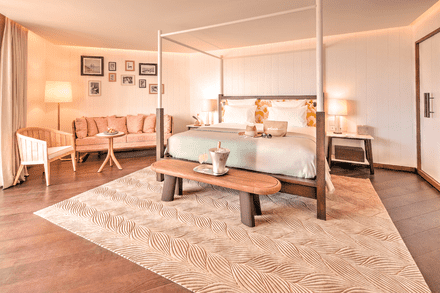 Another key benefit of staying at the Carl Gustaf? All the pampering and treatments you can dream of on site at the Spa Diane Barrière which offers multi-sensory and bespoke holistic treatments, facials, mani-pedis and tailored massage in three massage rooms as well as a fitness and yoga studio. I signed up for a massage and after an hour of bliss and relaxation. I had to purchase the Biologique Recherche lotion that was used because my skin felt so smooth, and I loved the earthy scent. The Spa also carries the local brand, Ligne St. Barth, as well as selling chic swimwear and beach attire. Other activities that the hotel offers or can coordinate besides the electric bikes and aqua bikes include organizing a Catamaran sailing excursion, water sports, hiking tours, picnics, and fishing. 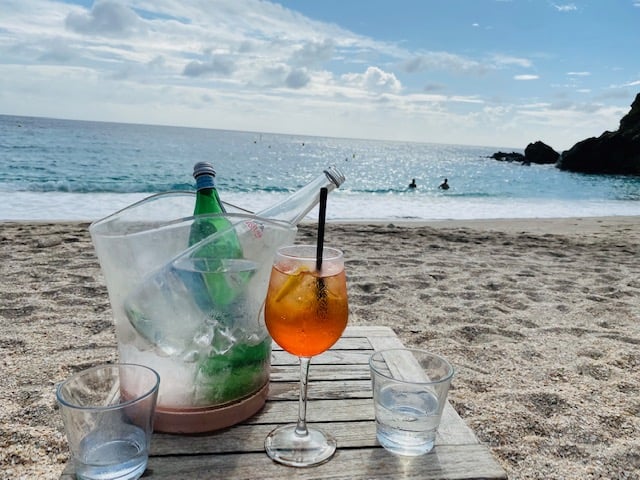 Shell Beach has the best sunsets on the island. And Aperol Spritz. Photo courtesy of Kristen O’ Brien

When I wasn’t relaxing at Shell Beach, on my own spacious balcony with the plunge pool, or at the spa, I ventured into Gustavia for shopping at Louis Vuitton, Dior, Prada and adorable local boutiques like Poupette, Lolita Jaca and Sea Memory. I had some memorable meals at L’atelier De Joel Robuchon and L’Isoletta…and people watching at Bar L’Oubli. I also planned an excursion with the help of the concierge team to Eden Roc for dinner and to experience more of a party atmosphere. I appreciated that my hotel was more tranquil and not party central.

I do wish I had explored St. Barts more. After all, there are 40 quartiers to discover and so many places to swim, snorkel, hike, eat and dance the night away. But I was so happy with my stunning hotel and all that it offered; it was hard to stray too far. Next time I will plan to stay longer, but for now, I can still feel the warm Caribbean breezes, see the stunning water, islands, and mountains, as well as the colorful Caribbean buildings dotted with Swedish architecture and churches, and hear the bleating of the cabris, the church bells ringing, the mourning doves singing and by nightfall, the katydids. St. Barts is a magical place that enchants the senses, luxurious but understated although there is nothing understated in its stunning beauty and impeccable hospitality. 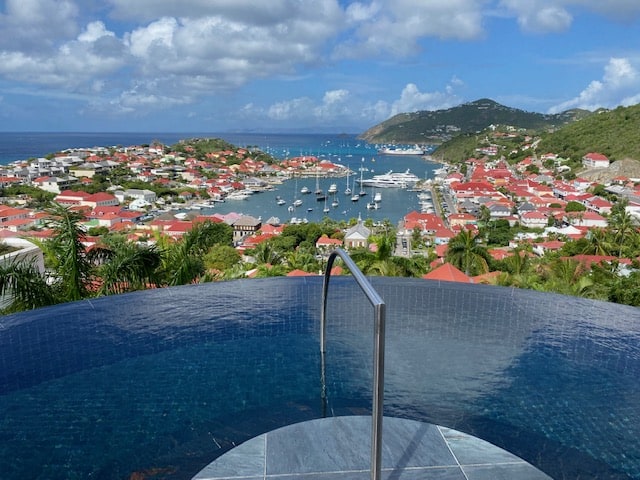 Nothing beats the view from the private Villa Diane. Photo courtesy of Kristen O’Brien