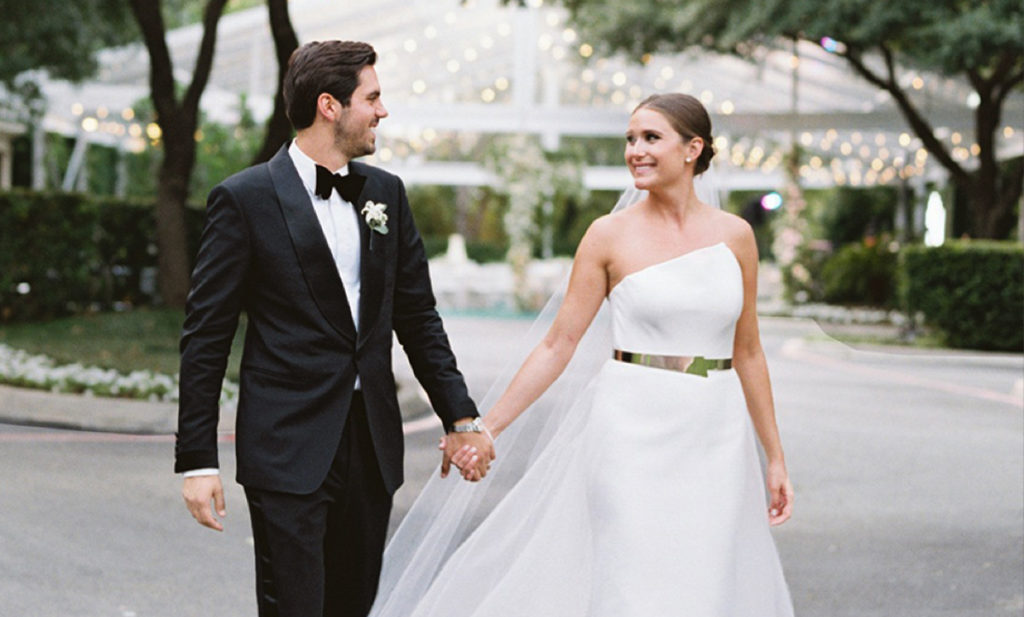 Wendy Bowman and Chantz Butler were recently married in San Antonio on the front lawn of The Argyle on a perfectly crisp autumn afternoon, splashed in sunshine and surrounded in steadfast support by their family and hundreds of friends who traveled from across the country to bear witness to the union of the two kindred souls. The parents of the bride, Jean and Clyde Alexander, and R.H. Tibaut and Shelly Bowman, and the parents of the groom, Diane Butler and the late Frank Butler (in spirit), joined in welcoming guests to their childrens’ nuptial celebration.

Growing up in San Antonio, little did Wendy Bowman and Chantz Butler know that their lifelong happily ever after was already beginning in 1995…as first-graders at Saint Mary’s Hall school. It was a classic love story that started somewhere in their memories, and was a contemporary romance left completely to chance. A mutual friend’s 30th birthday party in March of 2018 would bring them together again, after decades of living their respective journeys, for a star-crossed moment at just the right time in their adult lives when they expected it least. Wendy walked into the party, her eyes met Chantz’s across the room, and they spent the evening reconnecting. Within four months, she had packed her eight-year history in New York City and headed home to San Antonio to be with Chantz. On Christmas Eve of 2018, he proposed privately, and the celebration plans of the couple’s love for one another began the following morning. Even after one year of marriage, the outpouring of joy continues.

It was a weekend-long celebration that began with an elegant rehearsal dinner at Pearl’s Hotel Emma before the wedding at The Argyle. The guest list was an eclectic mix of the couple’s old and dear San Antonio friends, friends of Chantz’s from his days at the University of Colorado at Boulder, friends of Wendy’s from her years at Texas Christian University, a free-wheeling group of artist friends from Wendy’s years in Brooklyn, and many more groups in between.

For the festivities, no stone was left unturned in the planning process because of Wendy’s artistic talents. She meticulously braided layers of emotional significance into each curated detail of the event. Prior to their relationship, Chantz grew up in a family masonry business with a ranch in Argentina, while Wendy worked for a contemporary artist making geometric abstract paintings in New York City. Their distinct backgrounds were fused by their appreciation of modern aesthetics of music, fashion, travel, art, and architecture–the culture that had shaped their individual journeys. As a result, their combined vision was specifically authentic to their lives and partnership. Sweet August Events worked with the bride and groom to bring these details to life, creating an inspiring atmosphere that was a synthesis of mid-century modern design elements, seamlessly blended with a timelessly romantic aesthetic that wowed the attendees from start to finish.

Guten Co., a local ceramicist, and letter-presser, created the couple’s diamond-shaped wedding logo and all of their embossed paper products. The logo shape-shifted throughout the event, from the white hard-lined altar, to the gold geometric flower stands, the graphic seating board, the napkins and the dance floor, the screen printed flag by Local Threads that flew from the exterior of The Argyle, and even into the bride’s Romona Keveza gown that she wore. The logo was also made into silver earrings and necklaces for each bridesmaid by San Antonio-bred jewelry designer, Cassandra Polidori, of Cassandra Collections and printed on custom bomber jackets that the bridesmaids wore as the temperature cooled in the late evening.

The modern, clean design lines were juxtaposed with softer elements such as velvet tablecloths, the bride’s silk organza overskirt that was an ethereal contrast to her gown’s asymmetrical neckline, and her classic sapphire Manolo Blahnik shoes. The dress of the mother of the bride, Jean Alexander, was artfully designed and created by Angelina Mata of San Antonio. The floral décor, designed by Danny Cuellar of Trinity Flowers, featured climbing greenery and lush white roses. The clear, tented roof over the reception disappeared into the night sky, and the trees danced above the Edison bulb string lights. The turf flooring appeared as a grassy lawn beneath the Eames dining chairs, and the white grated Bertoia chairs that lined the rest of the tables.

Cathy Young Cakes designed the white wedding cake, wrapped by a singular asymmetrical line of roses, and Tomas Rosales designed the groom’s painted cake. After the couple finished their first dances, guests flooded the dance floor to join them in grooving to the 10-piece live Motown band, Love and Happiness, who performed everything from Van Morrison to Aretha Franklin. The after-party, inside of The Argyle’s Slick-Urschel room, was where guests sipped Brandy Freeze cocktails, snacked on sliders, and grooved to the sounds of DJ Soul Stairs into the wee hours of the morning.

The Butlers left their party under the light of a full moon. They perched on the back of a car, lent by the bride’s father, Tibaut Bowman, which was engulfed in the flickers of sparklers held by an ebullient, cheering crew of their wedding guests. Driving away toward the start of a new life together, the newlyweds were off to their honeymoon in Thailand and Japan, an exotic adventure to start their lifelong partnership. They currently reside in San Antonio, where the bride is a photographer, videographer, and painter, and the groom is vice president of Custom Masonry Corporation.